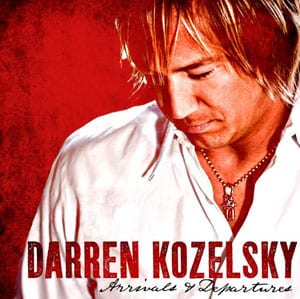 “Seven Vern Gosdins Ago” is the latest single from Texas-bred singer Darren Kozelsky. The heartfelt ballad is from his album Arrivals & Departures, which was released digitally May 29. Kozelsky was also named Breakthrough Artist of the Year at the 2008 New Music Weekly Awards. His sound has the comfortable familiarity of home, and his audience is rapidly growing.

Kozelsky got his first taste of country music at his father’s shop, where they would hook up speakers in every corner and surround themselves with music while working. After many years singing along to the radio and in church, he was teaching himself on his aunt’s guitar and entering talent shows. Eventually Darren was fronting his own country band and hit the road playing his own music.

His tour schedule keeps him busy out on the road, and includes a recent spate of performances during the CMA Music Festival. He’ll be back in Nashville June 21 for a performance at Tootsie’s.