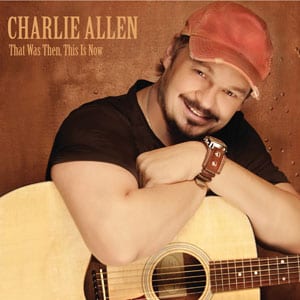 “I have made no secret of my respect for this artist. He’s proudly country, and this groove-saturated drinking song is one more feather in his cap.”
—Robert K. Oermann, Music Row.

So far, 2009 has been a banner year for Charlie Allen. Allen has seen his music gain acceptance around the world, and his media visibility has never been higher.

In January, he made a promotional appearance at MIDEM in Cannes, France, and performed an invitation-only showcase event at the Gibson Guitar Studio in London, England. And, he just celebrated his second No. 1 single in Europe. Recently, he was a featured guest on a special Memorial Day edition of Geraldo at Large on FOX News and currently is preparing for his second appearance opening the mega festival, Bonnaroo, in June. Allen’s new single, “Proof” is from his CD, That Was Then, This Is Now.

Allen hails from the east Tennessee town of Bristol, which is credited with being the birthplace of modern country music. (It was there that Ralph Peer first recorded The Carter Family, Jimmie Rodgers and others, creating what is now referred to as “The Big Bang” of country). Allen has been performing since childhood, when at age 7, he was singing onstage at Panther Hall in Ft. Worth, TX., and appearing in concert with iconic artists such as Hank Williams, Jr., Waylon Jennings, Loretta Lynn and Jerry Lee Lewis, among others.