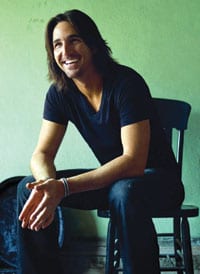 Jake Owen’s major label life kicked off back in 2006 with a rowdy “Yee Haw,” the leadoff single from his RCA debut, Startin’ With Me. That song hit the Top 10 and earned the Florida native his first ACM nomination for Top New Male Vocalist. His participation in the multi-artist single, “Life In A Northern Town” helped to kick the singer/songwriter’s career into high gear and led to his first CMA and Grammy nominations in 2008. That momentum continued with “Don’t Think I Don’t Love You,” the hit single and video and leadoff track from his sophomore release, Easy Does It. The album’s title sums up Owen’s reaction to what might have been a sophomore curse.

“My main goal with this album was to make music that’s not overdone or over thought,” Owen said. “I just went in the studio and sang. I’d sing the song from start to finish a couple of times and then leave because there was no doubt in my mind that I’d done the best I could do. Whether it’s perfect or not, it’s who I am.”

Throughout Easy Does It, Owen does indeed sound more relaxed and confident as an artist. “Don’t Think I Can’t Love You” is the perfect example of how the personal experiences inspire his lyrics. Partly inspired by his father’s devotion to his mother over the years, the song is just the first of several songs written specifically about romantic relationships. Though some of the love songs on Easy Does It, such as “Eight Second Ride,” veer toward the rowdy side, Owen has his own set of standards when it comes to addressing the fairer sex.

“It’s really important for me when I’m writing songs that speak to women that I speak to them in a way of respect,” Owen says. “I try to write in a way where a guy listening would say, ‘Man, I’d say that to a girl.’ Conway Twitty did that. He sang songs to women all the time, but it was a very masculine way of saying it. It wasn’t soft. I don’t think any of my love songs on this record are soft.”

As he works to refine his own musical identity in the studio, Owen gives a lot of credit to his producer, Jimmy Ritchey. Their working relationship provides the perfect environment for Owen to experiment with his emerging sound. As a result, Easy Does It offers a freewheeling and creative brand of country music that goes well beyond the standard country radio fare. Whether it’s the haunting bagpipe passage that closes the album on “Nothin’ Grows in Shadows” or the expansive musical build-up that leads in to the opening track, “Tell Me,” every song on Easy Does It contains echoes of Owen’s musical heroes while allowing him to forge his own musical path.

“I’m not doing this for the money,” he says. “It’s about believing in what you do, and doing it because you love it. Making music is what I love to do.”