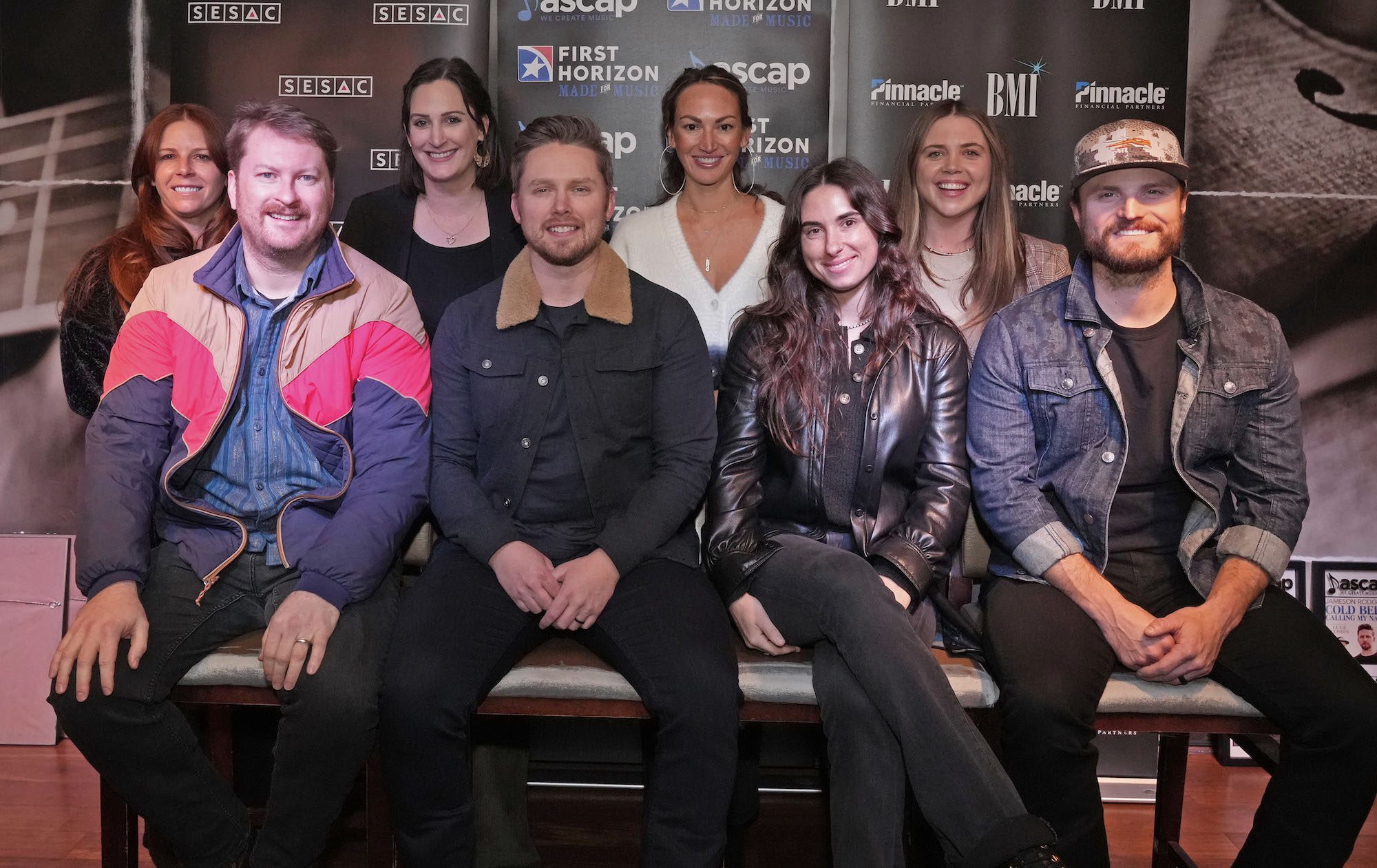 Jameson Rodgers celebrated his second No. 1 single, “Cold Beer Calling My Name,” at the Commodore Grille on Wednesday (Nov. 16).

The party was hosted by ASCAP, BMI, and SESAC. The Commodore Grille was chosen as its location because Rodgers met Phelps at a writer’s round there many years ago.

ASCAP’s Evyn Mustoe Johnston served as emcee for the celebration. “It’s awesome that we’re at The Commodore Grille where Hunter and Jameson met and used to play rounds. That’s pretty full circle,” she said. “I’ve know these guys for a long time and couldn’t be happier or more proud. They’re two very deserving people.” 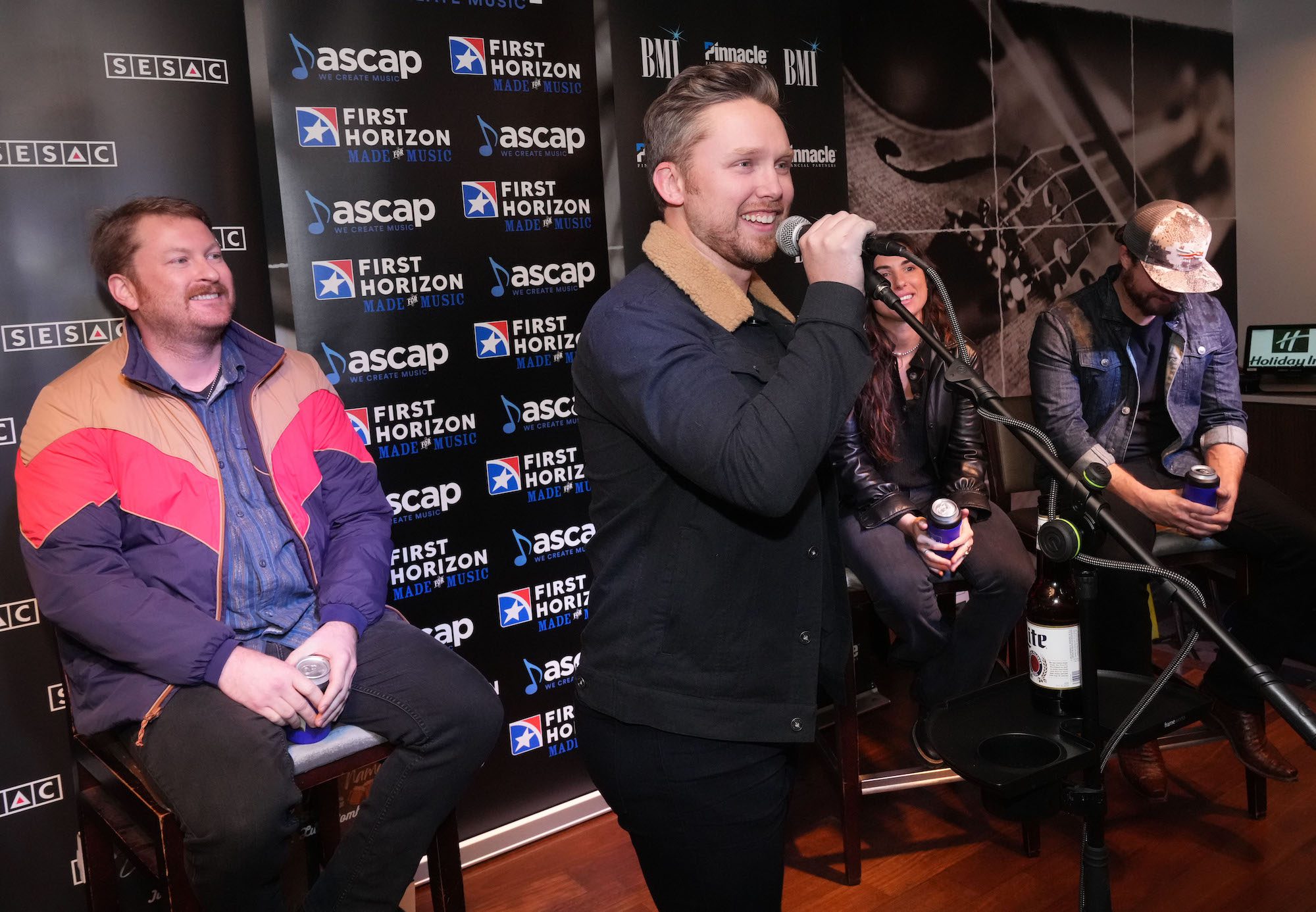 SESAC’s Lydia Schultz Cahill was on hand to speak about affiliate Vanderheym, who was celebrating her first No. 1 song.

BMI’s MaryAnn Keen spoke on behalf of Brett Tyler, who was also celebrating his first No. 1.

“Brett is an incredible person. He’s not only hilarious, but an incredible friend, he’s a sweet husband and he’s very smart on the business side as well. With all of that, combined with his insane talent as a writer, we will be celebrating many more No. 1 songs,” Keen said.

Combustion’s Chris Farren was the first publisher to speak about and present plaques to writers Rodgers and Tyler.

“This is so satisfying,” Farren said. “To see their talent, focus, and perseverance—them not taking no for an answer and just doing great work—[the fact that it] took eight years to get a No. 1 is unbelievable. Now the doors are open for both of you guys.”

“We get to work with Hunter every day. He literally turns in a smash hit every day. This crew is so fun to watch win,” Rhodes said.

Warner Chappell’s Ryan Beuschel presented plaques to the crew and talked about the journey of “Cold Beer Calling My Name,” noting that it had been pitched around a lot but landed right where it needed to be: back in Rodgers’ hands.

“This was one of those songs that was not about ‘if’ but ‘when’,” he said. “It just needed to land where it started, with Jameson.”

Castle bound’s Andy Friday spoke about Vanderheym, who was nominated for a Grammy this week, too.

Columbia Nashville’s Lauren Thomas was on hand to talk about Rodgers’ accomplishments. “Jameson, you are one of 10 artists since 2015 to have their first singles go back-to-back No. 1,” she said.

When it was time for the writers to speak, Vanderheym went first. She thanked her publishers, mentors, co-writers, Rodgers and Combs, and producers. She made sure to call out Tina Crawford and Chandler Thurston for their early influence in her career.

“They set up my calendar as a young writer, helped make my brand, and dealt with me. I love them so much and I share this with them,” she said.

Phelps was up next. “It means a lot to get to celebrate a No. 1 spot in this spot. I met Jameson here literally 10 years ago back there at the bar,” Phelps said. He called out all of his publishers for their hard work–as well as the village who helped get “Cold Beer Calling My Name” to No. 1.

Tyler gave a funny and heartfelt speech when he got up to speak. He gave special attention to each person he thanked. “It’s always great to write songs with friends. It’s even more meaningful to have your first No. 1 song with them,” he said.

Rodgers took the same approach as Tyler—keeping things funny and sweet when thanking his village.

“There’s a lot of people in this room that I love,” he said. “This is nothing but a full-circle moment for me.”

Rodgers thanked his co-writers, publishers, label team, managers, and family—telling anecdotes about each one.