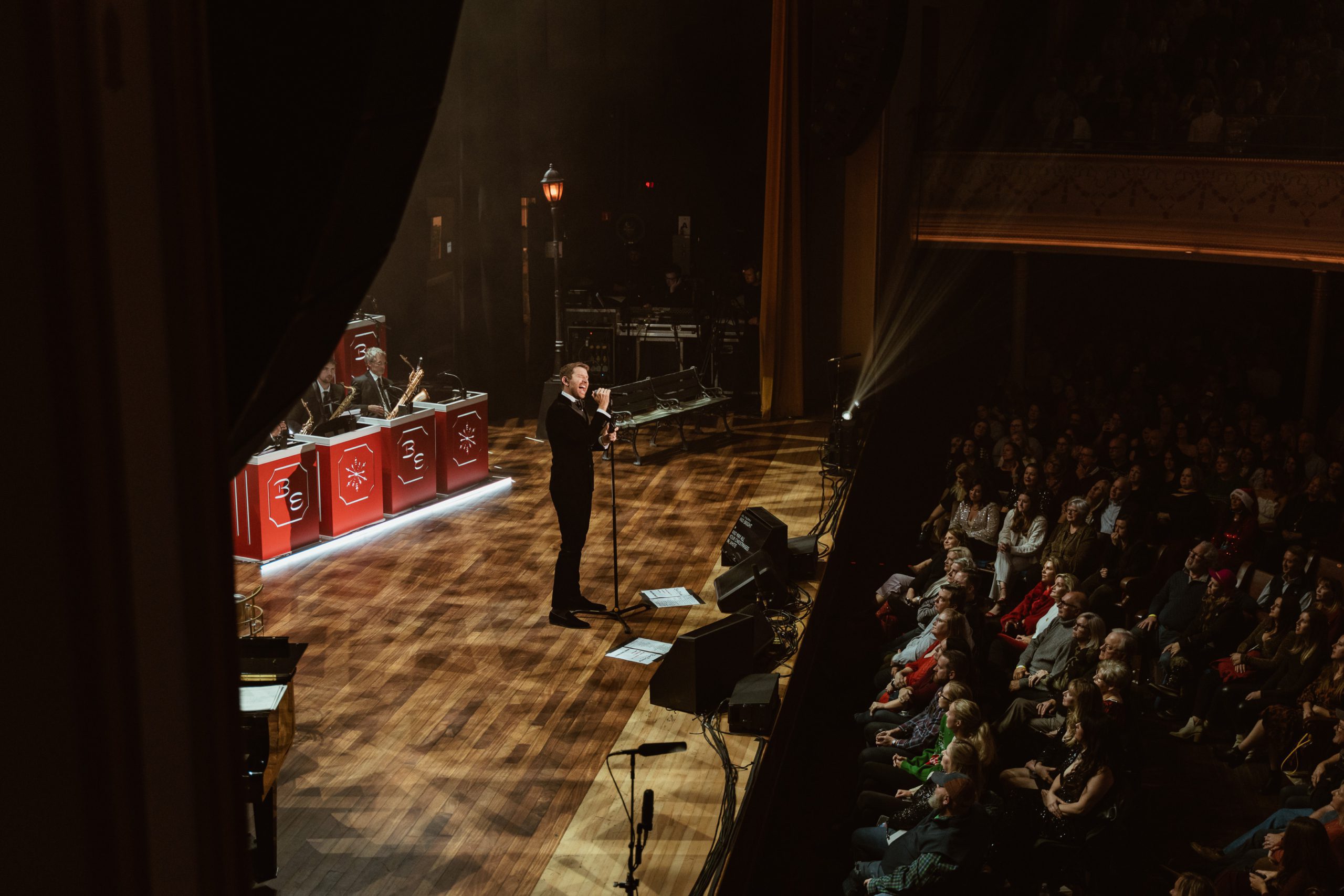 Brett Eldredge opened up his “Glow Live Tour” at Nashville’s historic Ryman Auditorium on Friday (Nov. 25). The special holiday trek launched with a three-day stint at the Mother Church of Country Music and will continue on with upcoming shows in Indianapolis, St. Louis, New York, and more before ending in Boston just before Christmas.

The inspiration for the tour and his album of the same name began with an intimate, live Christmas show in Nashville in 2014. Eight years later, the show has grown each year, now selling out the Ryman for three straight nights.

During the night’s festivities, Eldredge told the story of how this came to be. “About 2014 or so, I started having these little parties in Nashville in the basement in a bar. We had about 100 people that would be invited to this event–friends, some industry people and a six piece band instead of this big orchestra up here [with me tonight]. We grew it a little bit the next year. We’d move to another venue and then another one and another one, and now, we’ve sold out the Ryman three nights in a row. It’s so crazy.”

Eldredge has two Christmas albums to his credit: the tour’s namesake, Glow, from 2016 and his more recent Mr. Christmas from 2021. 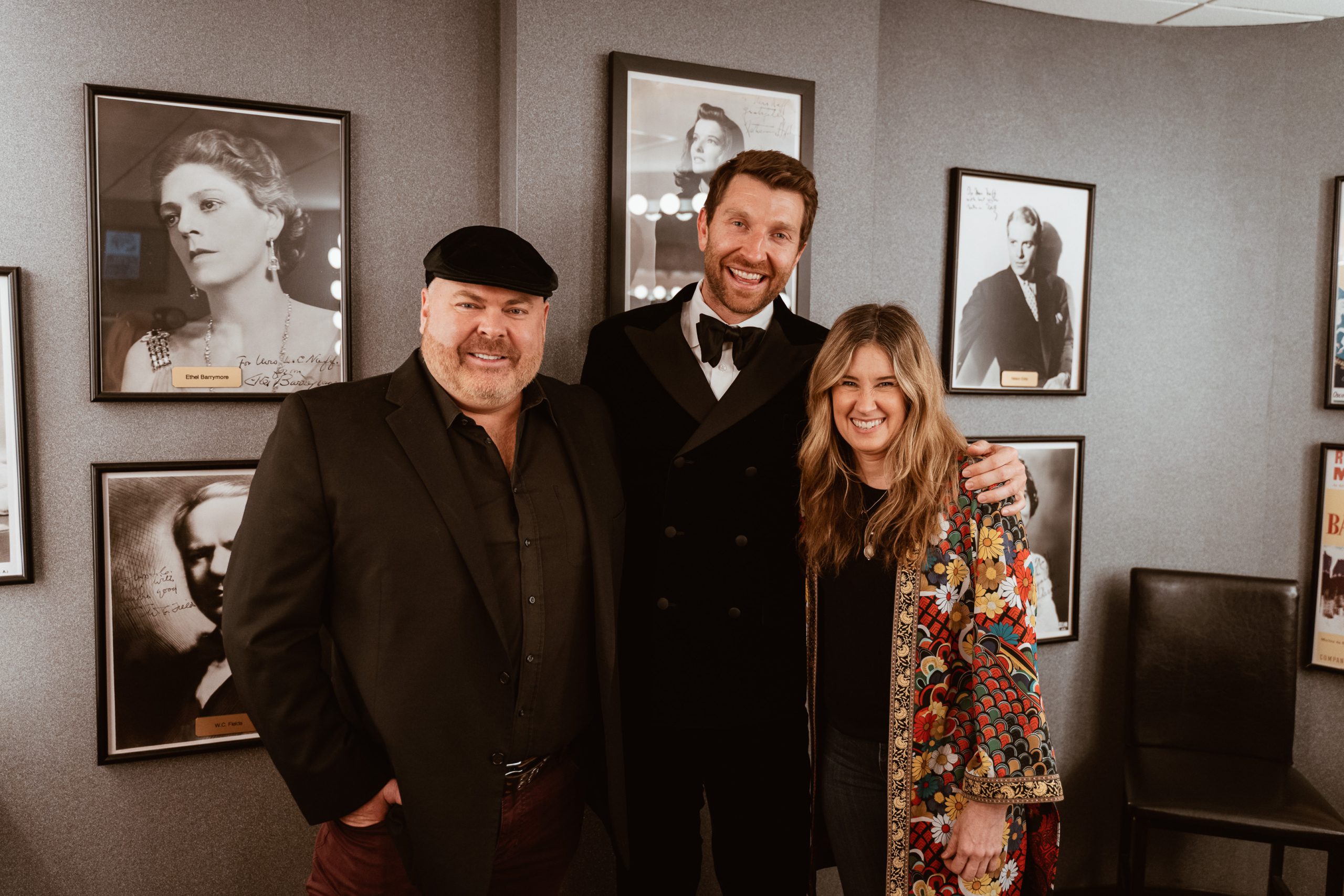 The stage was set with a 16-foot lighted Christmas tree, old fashioned street lamps, and a bench off to the side. The orchestra, which backed the country crooner throughout the show’s, was a modified big band set up consisting of 4 saxophones, 2 trumpets, 2 trombones, upright bass, piano, drums and an electric guitar.

Eldredge opened the show with a one-two punch of “It’s the Most Wonderful Time of the Year” and “Winter Wonderland.” He introduced the next tune by issuing two rules: the first being to allow yourself to be a kid again, and the second serving as more of an invitation to call him “Mr. Christmas,” which was the next song of the evening.

“Everyone is familiar with the line ‘chestnuts roasting on an open fire,’” Eldredge shared, noting that he often thought of selling them at these Christmas shows. However, after trying them, he admitted, “If I started selling roasted chestnuts, no one would buy them.” The next tune on the agenda was, of course, “The Christmas Song.” After the classics “Sleigh Ride” and “Do You Hear What I Hear,” the orchestra did an interlude of the Charlie Brown Christmas song, “Christmastime is Here.” Continuing to infuse the audience with Christmas spirit, Eldredge sang “I’ll Be Home for Christmas.”

“I gotta say, most of my ideas aren’t always great, but every once in a while, you just got to believe in yourself. Just go after that thing that might seem kind of crazy. There are a lot of people that have my back, making this music,” Eldredge explained before singing the title track to his 2016 album. He followed it up with “It’s Beginning to Look Like Christmas,” “Silent Night,” and “White Christmas.”

Before playing his original “Feels Like Christmas,” Eldredge addressed the packed crowd. “During the thing that happened in 2020, where we sat around on our couches for a long time, I wrote songs.” He recalled, “I would play my guitar and write by myself. I’d write a little piece like the first verse over a couple months. This song ended up becoming one of the most soulful songs I’ve written. A beautiful Christmas song to put you in the mood.”

After a standing ovation, Eldrege returned to the stage to sing “Have Yourself a Merry Little Christmas.” The final song was an unplugged, acapella version of “The First Noel.”

“I’m gonna get off this mic and I’m going to sing to you. This is how I like to end the show,” Eldredge concluded. “This is something that is so rare–to be together and to feel this energy and this spirit. I know it’s a tough world out there with the times right now. I think that the words, the message, and the heart of this song have always done something really special.” He added, “I want you guys to go off tonight and hopefully carry this one place in your heart throughout the rest of this year and onto the next year. Thanks for being a part of this tradition. I love you guys. Thank you so much.”

Eldredge ended the night with a “Thank you” and a “Merry Christmas” as the band played the final notes. The house lights came on as he signed autographs and interacted with the audience.