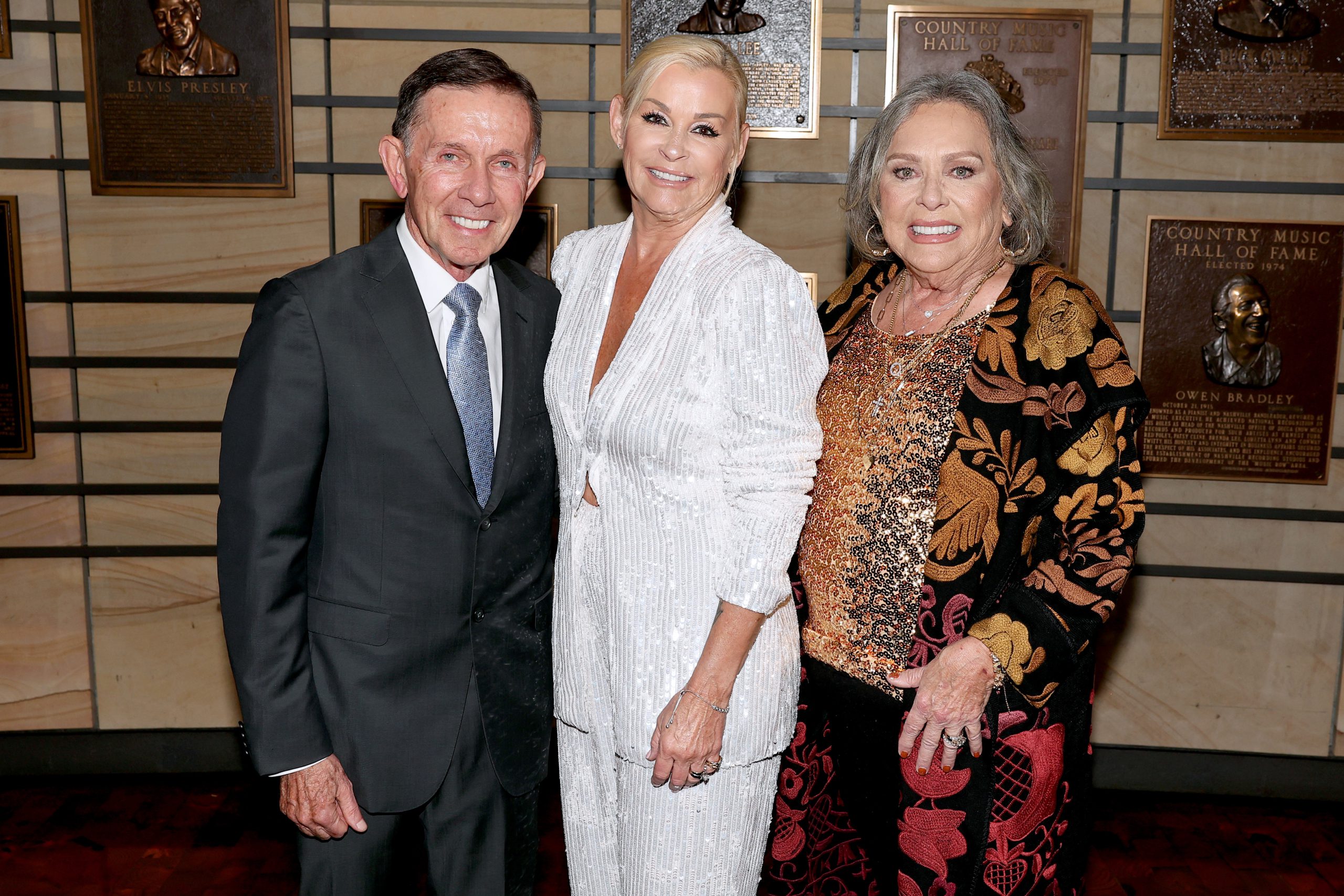 A record-label genius and two of the finest honky-tonk singers who have ever lived entered the Country Music Hall of Fame on Sunday (Oct. 16) during a star-studded ceremony.

RCA’s Joe Galante, tragically departed singer Keith Whitley and legendary Jerry Lee Lewis were lauded as the 2022 inductees at the Medallion Ceremony in the Hall’s CMA Theater. The capacity crowd in attendance was entertained by compelling video bios of the three honorees and tribute celebrity performances, all of which were surprise appearances. 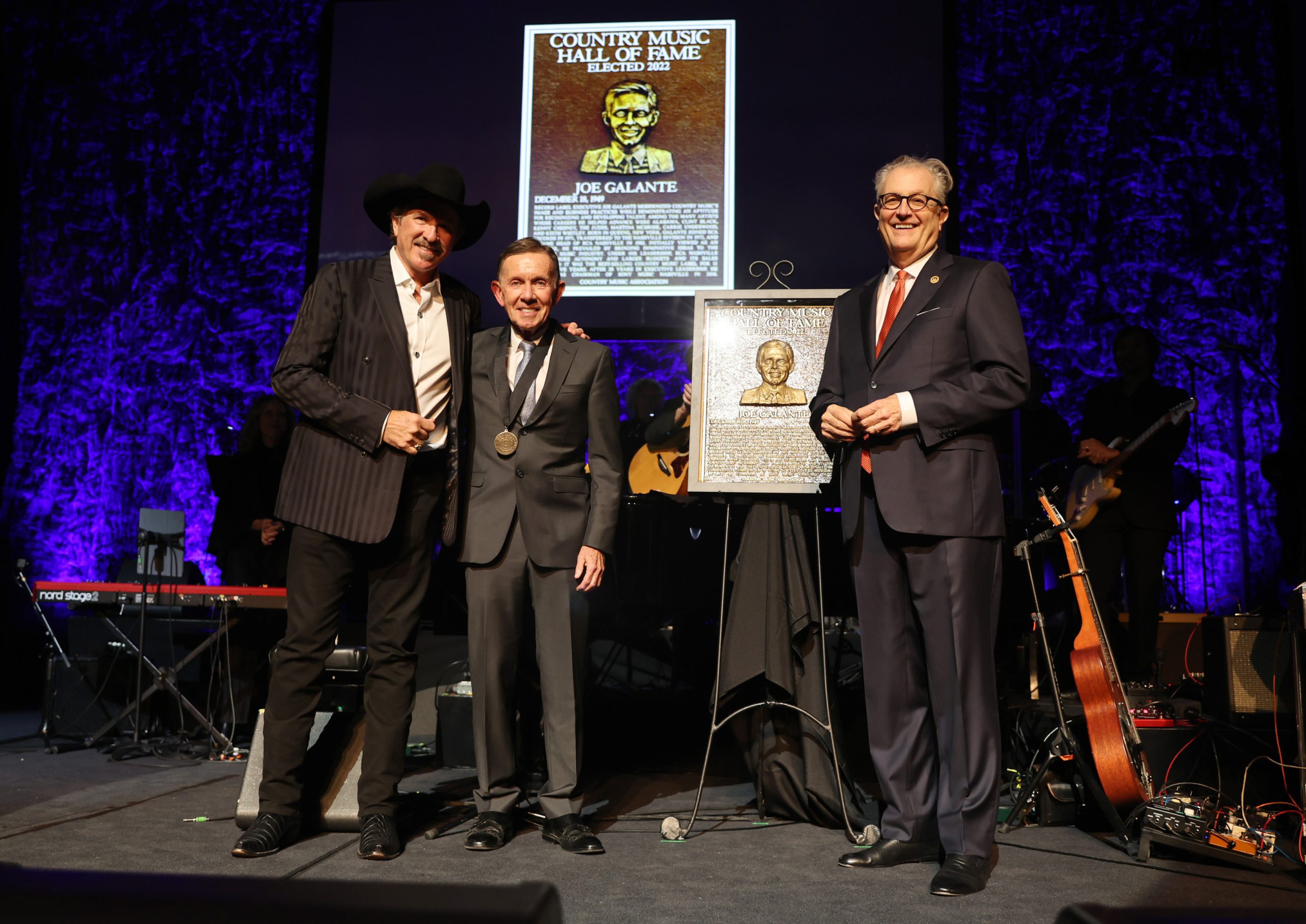 “He recalibrated the commercial possibilities of country music,” Young noted. He cited the dramatic increase in the number of Gold and Platinum selling country artists during Galante’s 30 years as a label chief.

Galante and each of the other inductees were saluted with a video bio that featured rare footage and stills. Young then spoke at length, often repeating the same biographical information. Then came the star surprises. 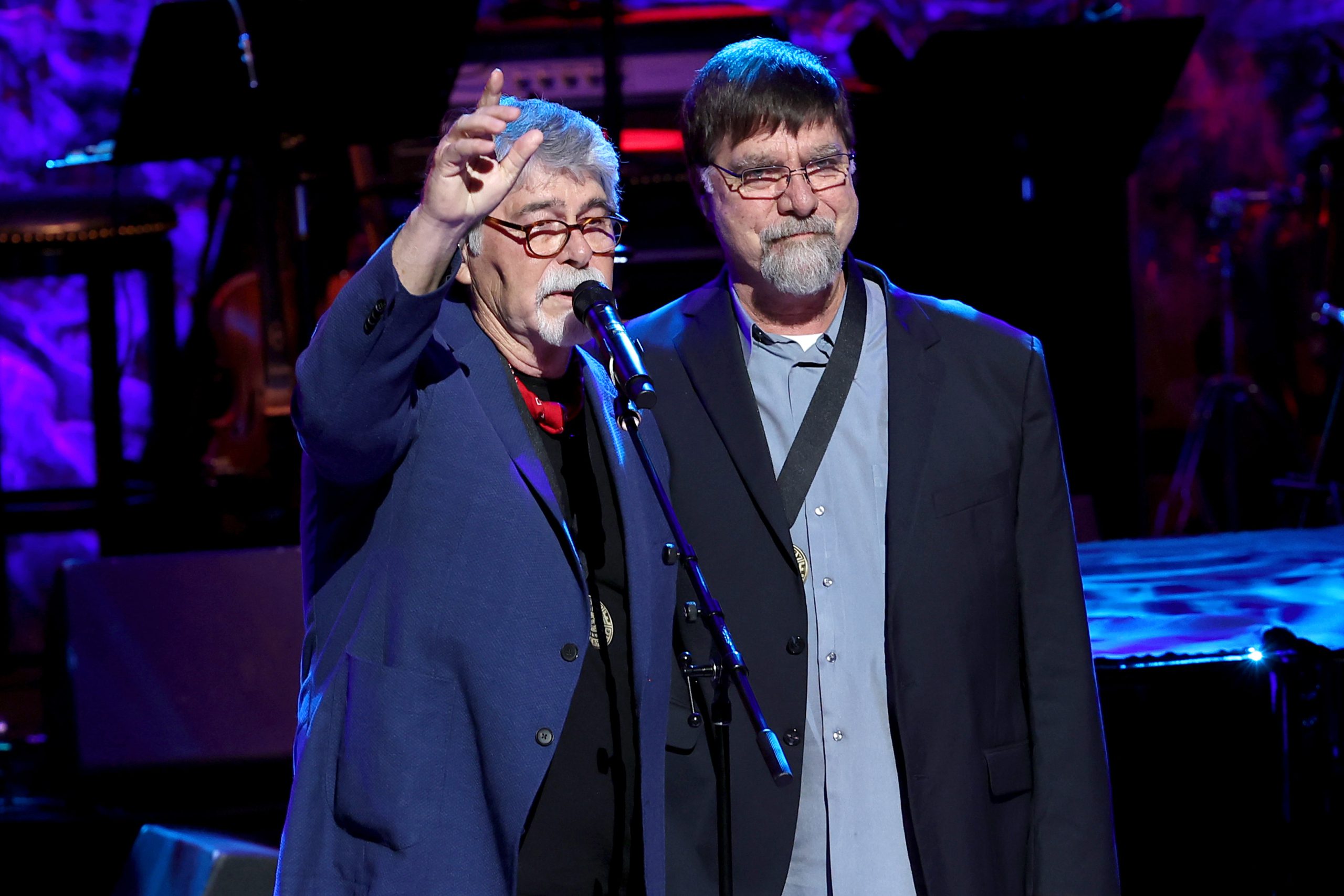 Randy Owen and Teddy Gentry of Alabama took the stage to sing “My Home’s in Alabama” for the man who made them stars. Miranda Lambert scored her first No. 1 hit when Galante became involved in her career. With just her own solo guitar accompaniment she sang it, “White Liar.” Then Galante-signee Kenny Chesney sang “The Good Stuff.”

Kix Brooks presented the Medallion to Joe Galante while Young unveiled the bronze plaque. These acts mark a person’s official Hall of Fame induction. “It’s really humbling when you get to this place,” Brooks said. “He loves music the same way that we do.”

“This has been a spectacular feeling for me,” said Galante. “I was their record-label head, but I was a huge fan of their music… Business became friendship, and friendship became family. I am both humbled and honored to be here.” He spoke movingly of his late wife Phran, who accompanied him on his journey to greatness. 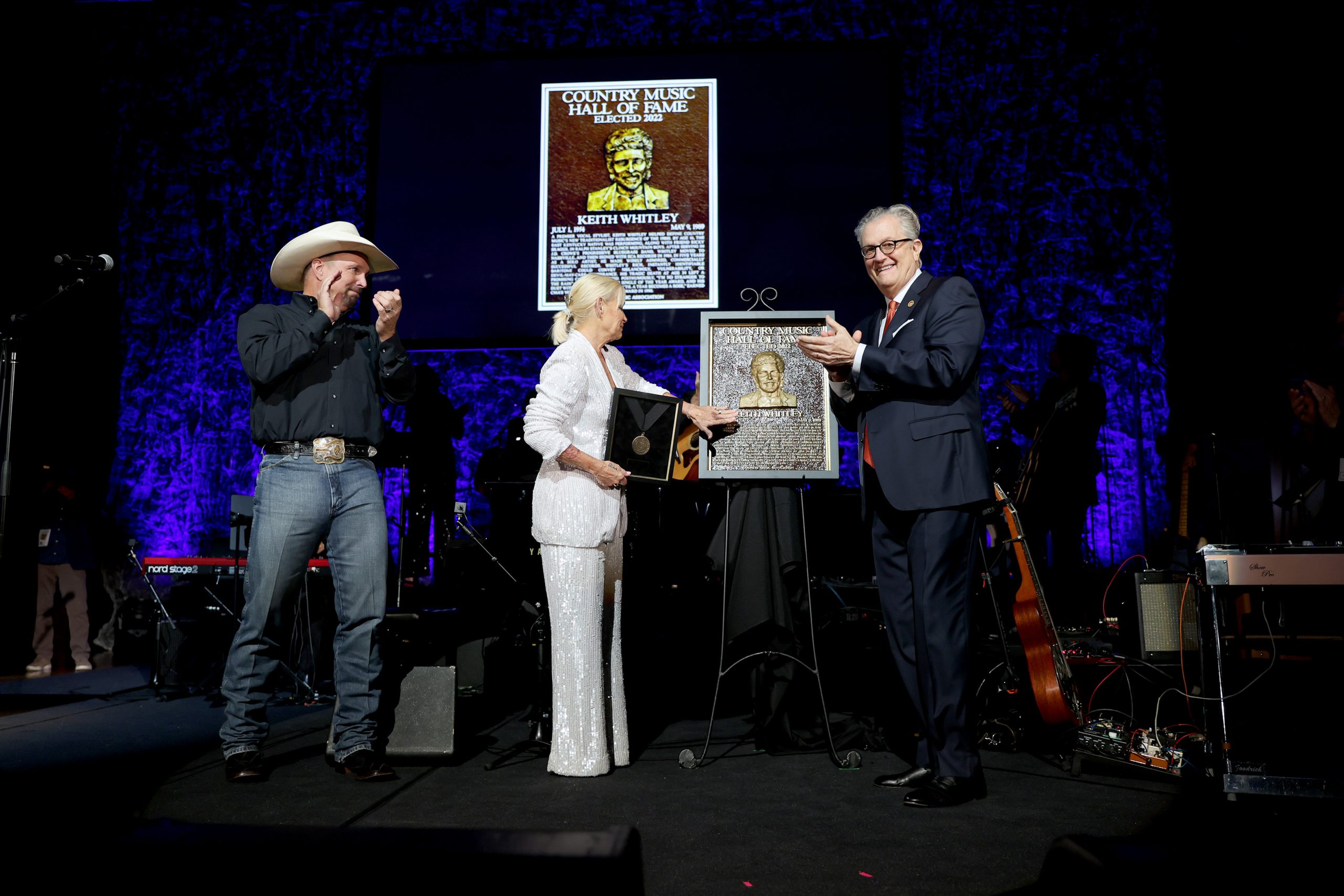 “Not many singers could so inhabit a song,” he said. “He was a singer fo the ages. This was a once-in-a-generation singer.” He also noted the irony of Whitley’s album title when he was the lead singer for J.D. Crowe & The New South, My Home Ain’t in the Hall of Fame.

Mickey Guyton saluted Whitley with “When You Say Nothing at All.” Ricky Skaggs, who was Whitley’s singing partner when they were Kentucky teens, performed “Tennessee Blues” alongside Molly Tuttle and Justin Moses. “This is a bittersweet night for all of us,” Skaggs said. Whitley succumbed to alcoholism in 1989 at age 33.

Young pointed out that Whitley’s influence pervades current country, citing Tim McGraw, Alan Jackson, Blake Shelton and Chesney as disciples. This led to the introduction of another disciple, Garth Brooks. 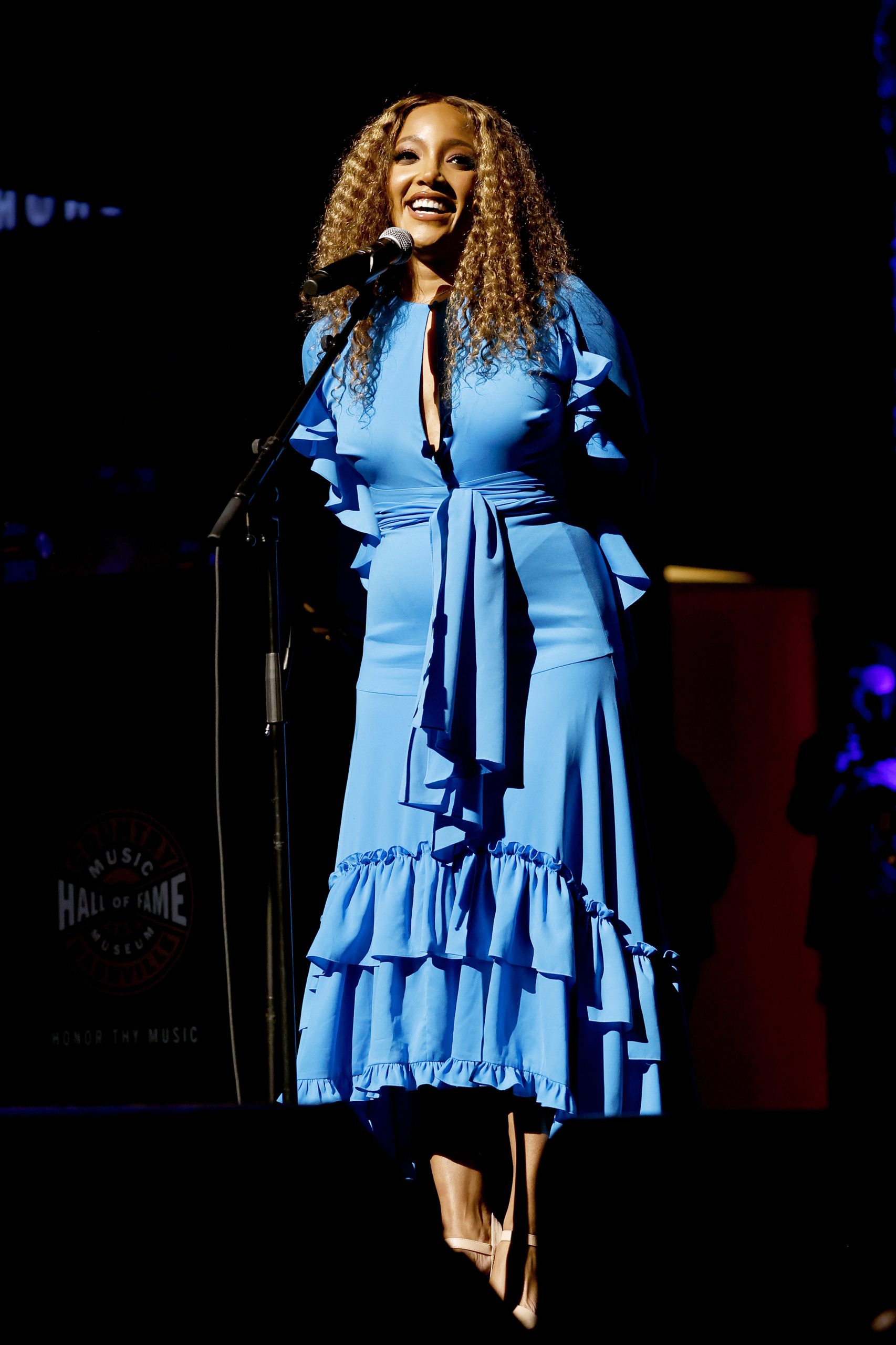 “For all country-music fans, this night in long overdue,” Brooks said.

“The guy could out-sing 99% of us.” Brooks performed “Don’t Close Your Eyes” as a solo-acoustic gem. He also did the Medallion honors, presenting it to Whitley’s widow, Grand Ole Opry star Lorrie Morgan.

When he died, Whitley “was three weeks away from being a member of the Grand Ole Opry — he didn’t know it,” Morgan shared. “He loved all of these Hall of Fame members — he was such a fan. He would feel so undeserving.”

The Jerry Lee Lewis video illustrated his triumphs as the 1950s rocker of “Whole Lotta Shakin’ Goin’ On,” “Great Balls of Fire” and “Breathless,” followed by a decade in musical exile. His 1968-81 comeback was as the peerless country stylist of more than 30 top hits, including “Another Place Another Time,” “What’s Made Milwaukee Famous,” “She Even Woke Me Up to Say Goodbye,” “There Must Be More to Love Than This” and “Thirty Nine and Holding.”

Young said of Lewis, “There is no entertainer like him — a genius of rare musical spontaneity….an unquestioned pillar of rock & roll and country music.” “The Killer,” as he is known, was a charter inductee into the Rock N Roll Hall of Fame in 1986. 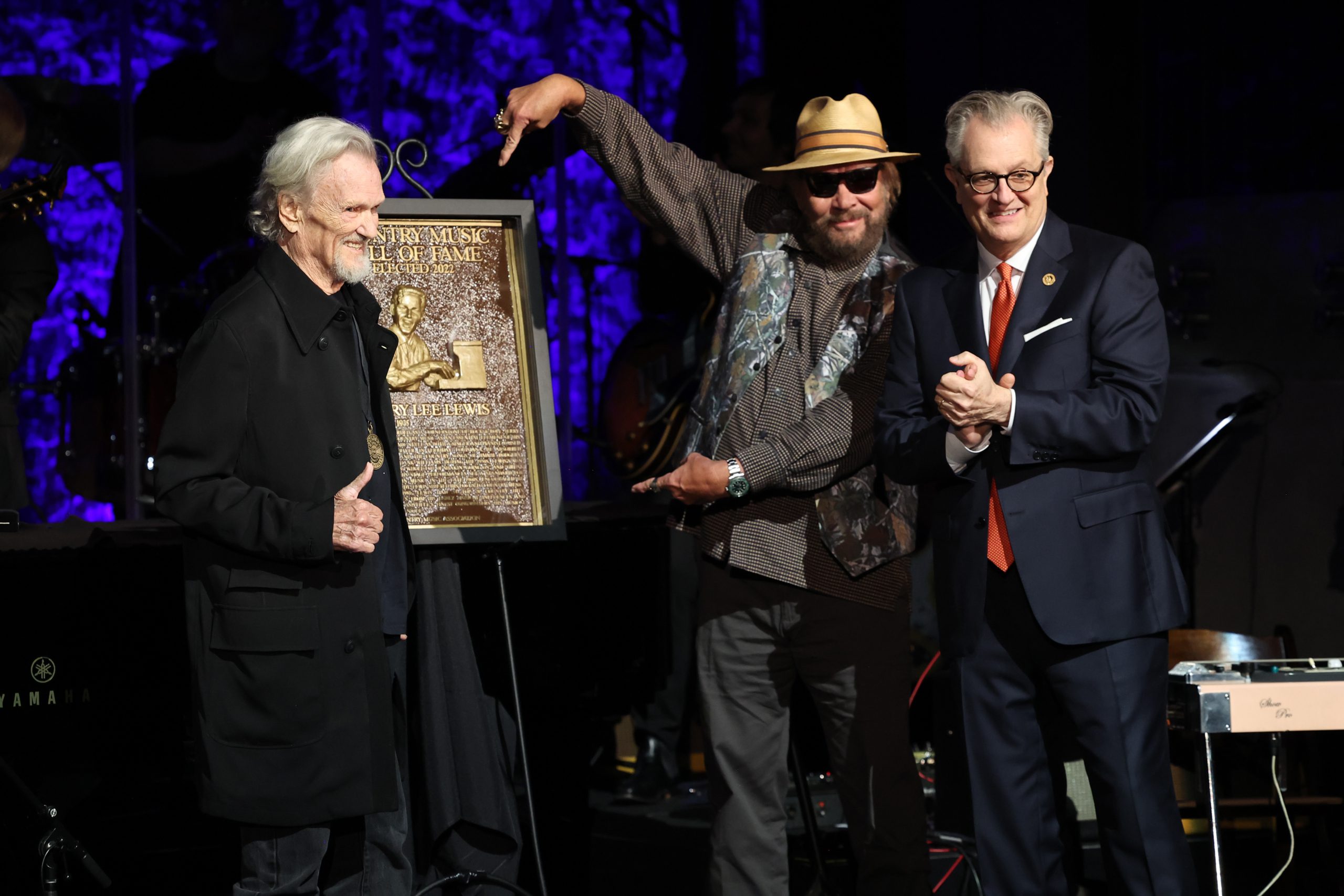 Lee Ann Womack saluted Lewis with her version of his 1977 hit “Middle Age Crazy.” The McCrary Sisters had everyone on their feet and clapping to a rollicking, rousing treatment of “My God Is Real.” Lewis was expelled from Bible college for similarly rocking the song. Chris Isaak was joyous and charismatic on “Great Balls of Fire,” supported by Jen Gunderman’s piano pyrotechnics.

Hank Williams Jr. inducted Lewis. “Jerry Lee was one of my teachers,” he recalled. “It was then that I realized I was ‘Born to Boogie.’ Jerry Lee doesn’t ask for your attention, he demands it….He will be The Best as long as people listen to recorded music.”

Lewis, 87, was planning to attend, despite being wheelchair bound and increasingly frail. But doctors advised him on Sunday morning that he should not travel from his Mississippi home to Nashville. So Williams read a statement from the legend.

“I was so looking forward to it,” Lewis wrote. “Country music has always been the genre where I feel most at home. To be inducted into the Country Music Hall of Fame is the highest honor… Thanks to God for allowing me to experience this honor while I’m still here.”

Kris Kristofferson, who wrote Lewis’s hits “Once More With Feeling” and “Me and Bobby McGee,” accepted the Medallion from Williams. Then Bill Anderson led the crowd in singing the traditional ceremony closing song, “Will the Circle Be Unbroken.” He got a big assist via the fiddle filigrees of Deanie Richardson. 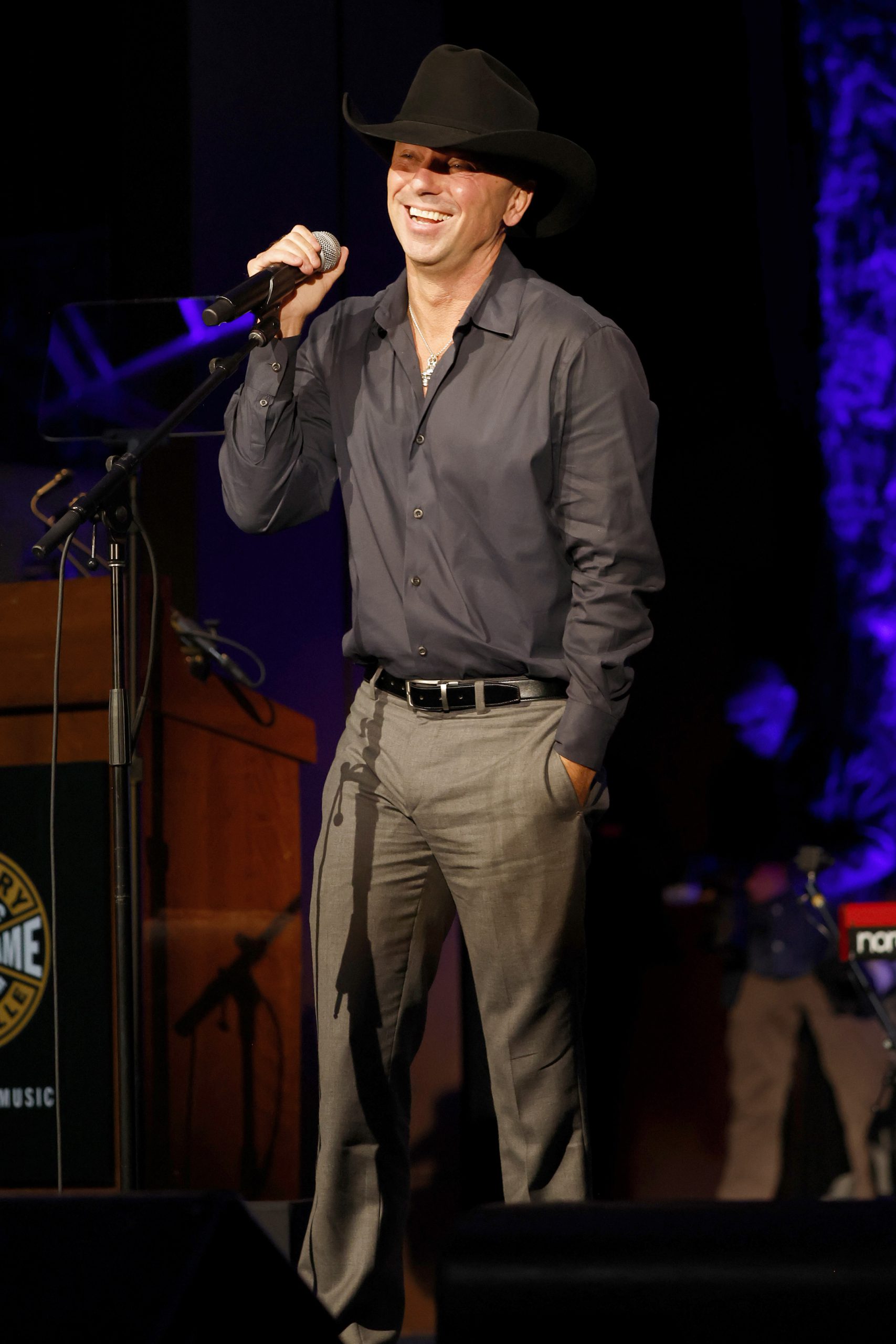 The three-hour ceremony began with an audio entertainment, the 1930 Jimmie Rodgers hit “Blue Yodel No.9.” On it, country music’s first superstar was accompanied by jazz legends Louis Armstrong and Lili Hardin Armstrong.

Also prior to the inductions, Trahern offered a eulogy for American music icon and Country Music Hall of Fame member Loretta Lynn, who died at age 90 on Oct. 4.