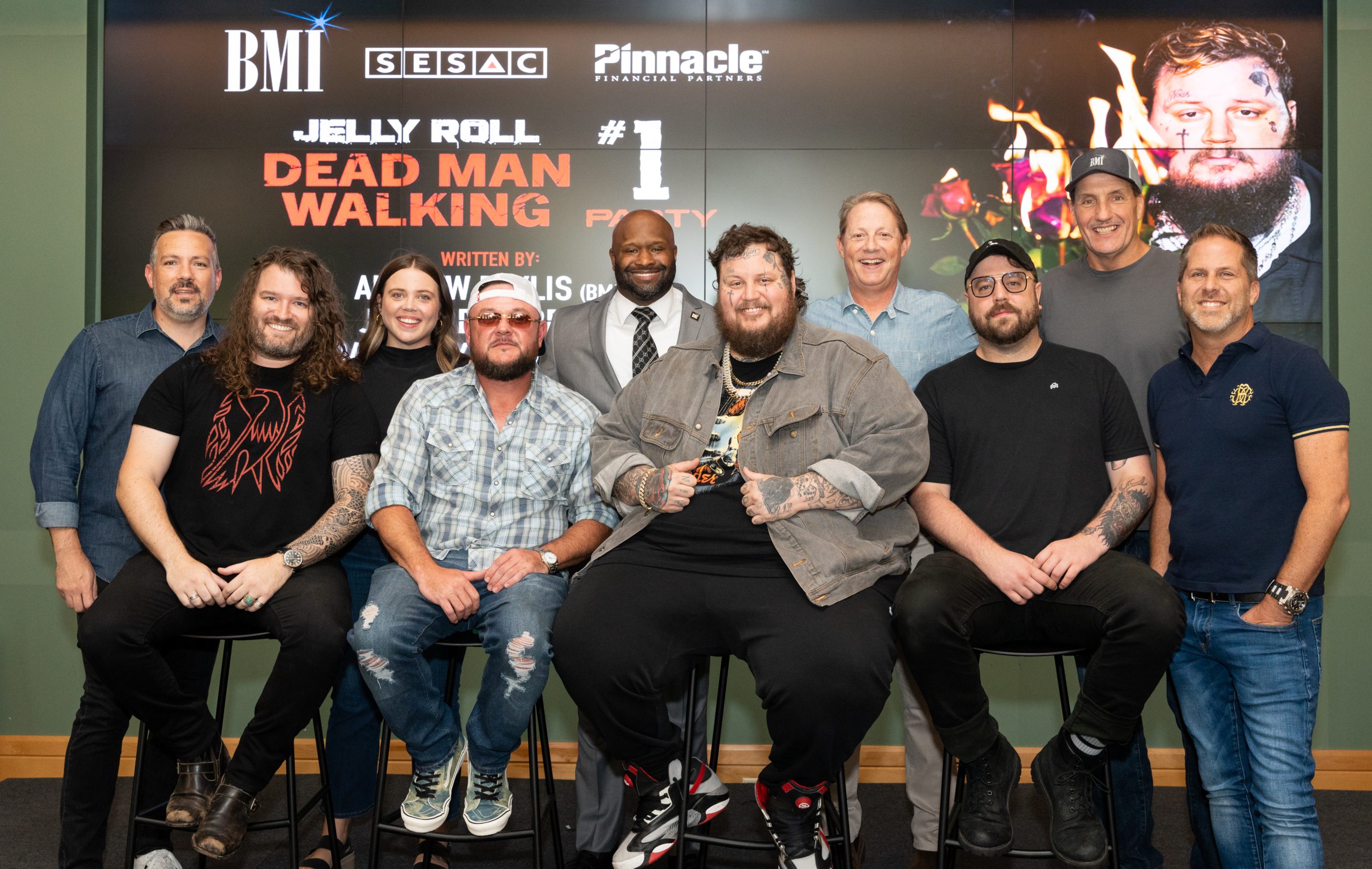 The party, hosted by BMI and SESAC, celebrated Jelly Roll and co-writers Michael Whitworth, Andrew Baylis, and David Ray Stevens. “Dead Man Walking,” which spent two weeks atop the Billboard Mainstream Rock Airplay chart, was the first No. 1 song for all writers.

BMI’s Shannon Sanders served as emcee for the occasion. “We have a lot of No. 1 celebrations, but because this one is home grown, it hits different,” he said to an excited crowd.

“I’m excited for our four songwriters today,” Sanders said. “I’m so proud of these guys. You talk about a real Nashville come-up story… These guys have been doing this for a long time.” 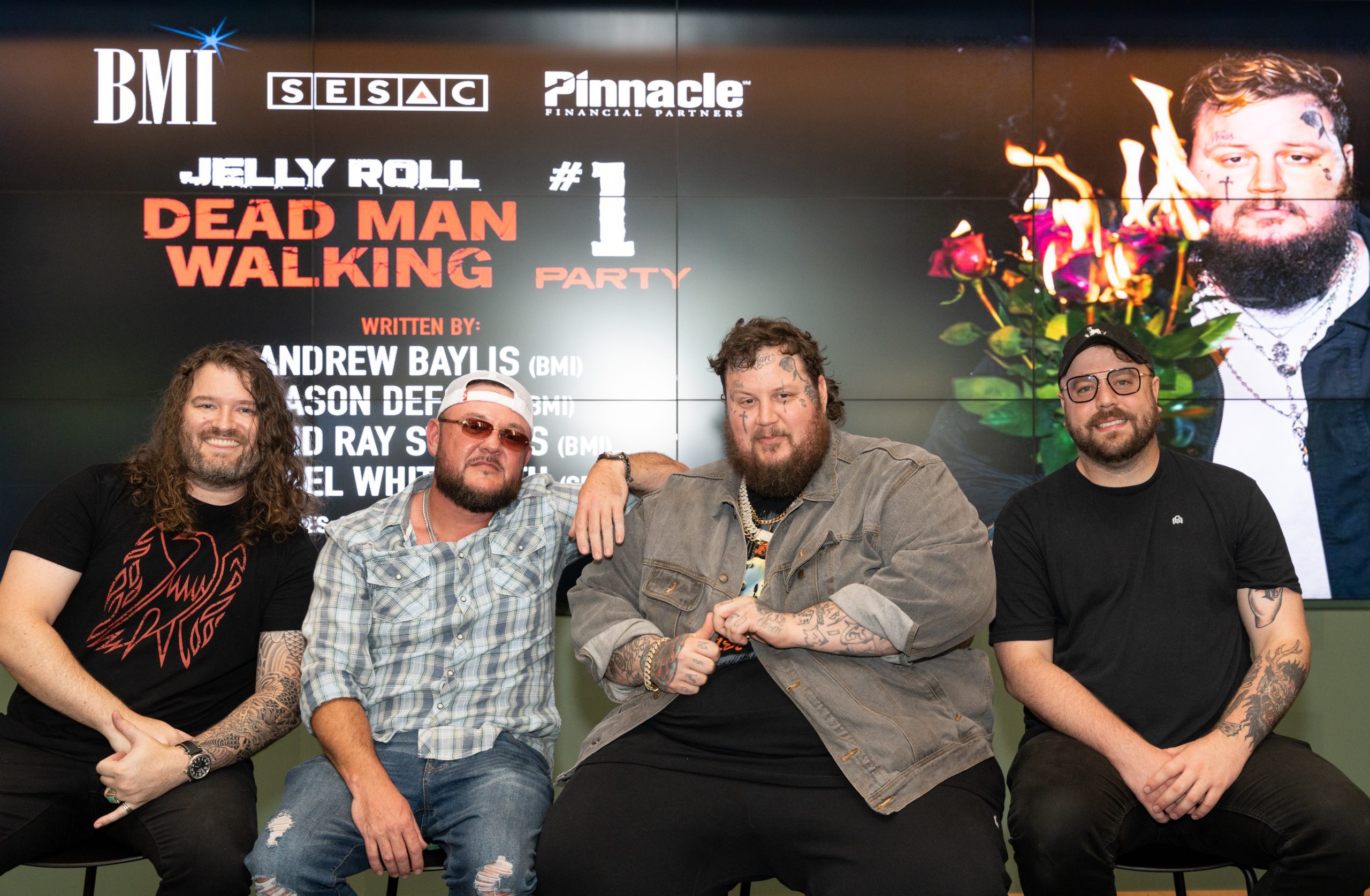 The celebration was jovial, and included many tequila shots from the stage.

SESAC’s Lydia Cahill was on hand to speak about co-writer Whitworth, who was one of her very first signings. “Your humility, drive and passion is going to keep us celebrating these songs for many years to come,” she said.

Sanders let the crowd know that three of the four writers owned their own publishing, so they wouldn’t have publishers speaking about them. Whitworth, however, is signed to Riser House, so the company’s Brandon Perdue was there to support him.

“I can talk about Jelly Roll—Jason DeFord—for days, weeks and months,” he said. “From the minute that Adrian Michaels introduced us, I fell in man-love with Jelly Roll. First, by listening to his art, then by getting to know his heart. He’s got both in spades.

“No. 1 records are rare, as you know. We plan to have more, but savor this. Soak it in,” Loba added. “It’s even more special that you get to do it in your hometown and help further establish Nashville as not just country music, but the epicenter of North American music.”

When the songwriters spoke, they talked about writing rock music in a town known for country music, and how being in Jelly Roll’s circle had changed their careers.

“The cool thing about Jelly Roll is he’s changing lives with his songs. He changed my life,” said co-writer and producer Baylis. “I grew up in a small town. Having dreams like this is crazy, but I hope that when people look at someone like me, instead of being put down all the time, I hope they feel like they can do it.”

Stevens talked about his long-time friendship with Jelly Roll and the full-circle moment of celebrating a No. 1 in Nashville. “I’ve known you for 20 years,” he said. “To be born and raised here, it’s surreal to be up here. I was just mesmerized by the Music Row banners growing up. I always thought we would be here—it’s just something about your character.”

Whitworth told the story of the night “Dead Man Walking” was written at Sound Emporium at 3 a.m.

“A rock No. 1 on Music Row!” Whitworth said. “Thank you BMI and SESAC for celebrating something outside of country. I love country, it has my soul, but damn, music is music. This is awesome.”

When it came time for Jelly Roll to speak, he made sure to thank everyone in the room. He made sure to give a shout out to Michaels, who he refers to as “Meatball,” for recognizing his talent and helping him assemble a team around him.

“Meatball is also responsible for introducing me to a man that completely changed my life, narrative and direction of everything I thought I was going to do. His name is Jon Loba,” Jelly Roll said. “He showed me something I didn’t think was possible. He showed me how I could continue to be myself but we could take this to a mainstream platform and figure out how to spread this message across America without compromising the integrity of the nuances of art and the freedom or artistic expression.”

Jelly Roll closed with a word of thanks to his co-writers. “The coolest part of this story is that four dudes who never had a No. 1 wrote a song, blackout drunk and on nefarious drugs, at 3 a.m. and the record went on to be a No. 1 at radio.”