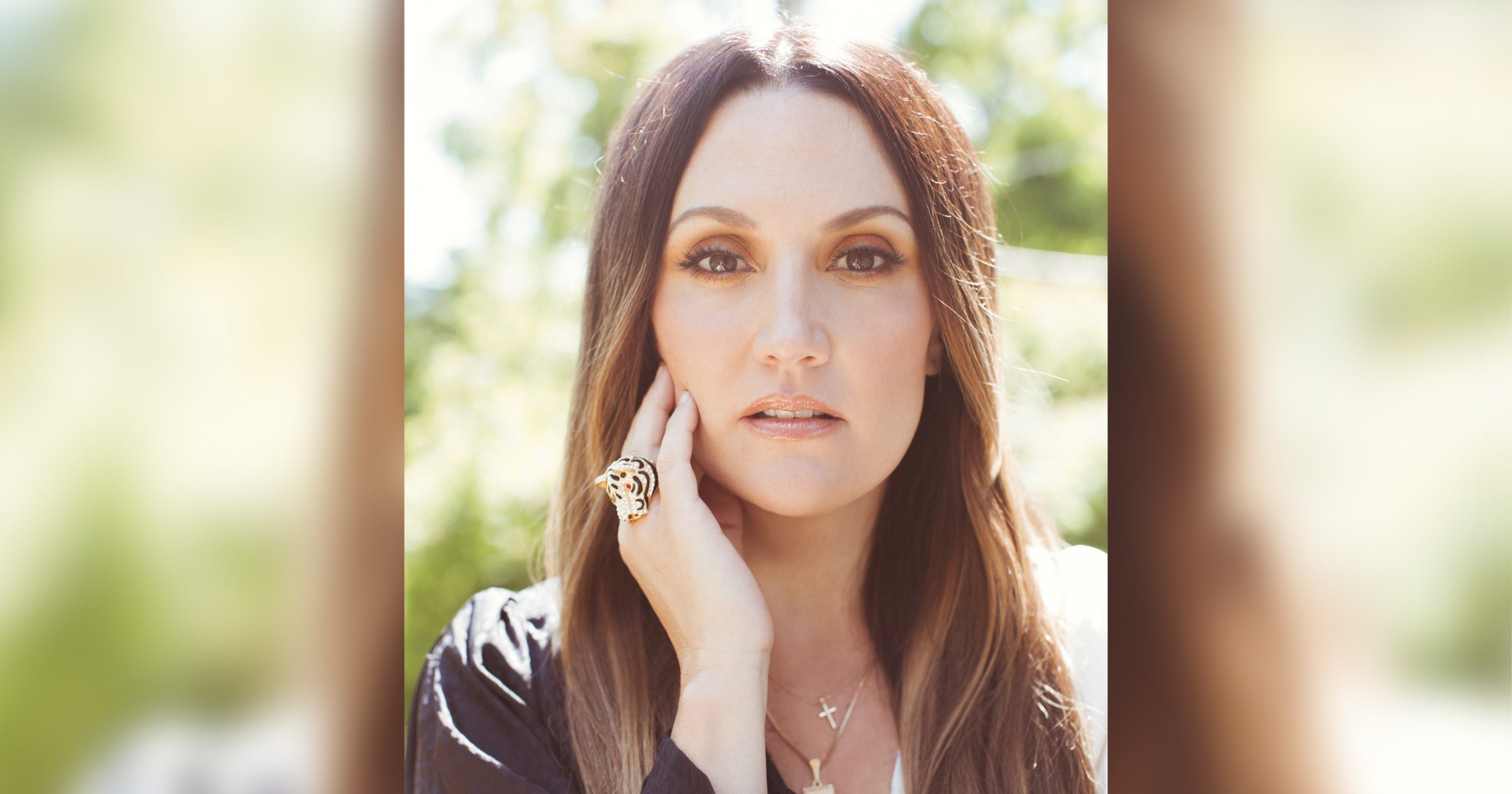 In 2019, Hemby joined Brandi Carlile, Maren Morris and Amanda Shires to form The Highwomen. Their self-titled album debuted at No. 1 on Billboard’s country albums chart. That year, The Highwomen won Americana Music Honors & Awards for Album of the Year, Duo/Group of the Year, and Song of the Year for their single “Crowded Table,” which was also dubbed the Best Country Song at the 63rd Annual Grammy Awards.

In 2021, Hemby stepped out with an artist project herself, releasing her album Pins and Needles to wide acclaim. MusicRow: Tell me about your childhood.

I was born in Illinois. My parents were very young when they got married and were very young when they had me. My dad was in music and he decided to move us [to Nashville] because music was becoming a really big thing here back in the ’70s. We moved here in ’79, so I grew up in Nashville. We lived in the Iroquois Apartments over in Bellevue, then they bought a duplex and then we bought our first house when I was about 11 years old. I was actually a sick child growing up. I had horrible ear infections and I had a tumor on my ear, so I couldn’t hear very well. My mom had to take me to the doctor all the time and she ended up losing her job over it—and my dad was on the road a lot. Long story short, I had to have surgery and all this kind of stuff. I got baptized when I was seven and I’m not even joking when I say that after I got baptized, I got all my hearing back. It was a miracle, honestly.

My dad started working for this woman named Amy Grant, playing in her band. My mom started cleaning houses because she didn’t have a job and she started cleaning Amy’s house. One day my mom said to Amy, “Listen, if you ever need an assistant, I’m really good at organization. I can help you get your house in order.” She’s been with her for over 35 years now, so I really grew up in the music business.

Were you musical as a child?

I was very musical, I loved piano. I started taking piano lessons when I was about six. I played in talent shows and I played saxophone in band. I’ve always loved music, not because my parents were in it, but because it brought me so much joy. It was a passion. When did you start writing songs?

I was such a dreamer. I just thought I’d be the singer on stage and it would be that easy. I never dreamed about music business, I didn’t even dream about writing. I was not a big songwriter [growing up], but what I did do was write a lot of poetry. I was a diary writer as a kid and wrote all my feelings down. (Laughs) Honestly, I didn’t start writing songs until I was about 18. Some people would consider that late in life. (Laughs)

Once you started writing songs, how did you start your journey to become a professional songwriter?

I started figuring out that all the artists that I love, a lot of them wrote their own songs. So I started writing my own songs. At the time I was listening to Sarah McLachlan and I was writing really sad piano songs, but I quickly evolved. I started writing with other people. I got my first publishing deal with Barbara Orbison at Still Working Music. Tommy Lee James was my first professional co-write. He was the first person on Music Row that I started writing with a lot. I wrote a lot of songs and I almost got a record deal, but those doors did not open. Throughout the whole process, the one thing I kept doing was writing and writing.

I never wanted to do country music, I wanted to do Tom Petty or Sheryl Crow-style music. But radio just kept changing. It went through a Britney Spears era, it went through a time where you had to be on a TV show to get a record deal, then it went through a Coldplay era. It kept evolving and, as far as being an artist goes, I couldn’t figure out what direction I was going in and what I wanted to do. So I just kept writing songs with and for other people. Then eventually, my husband [Mike Wrucke] was co-producing this girl, Miranda Lambert. You and Miranda have had a long and fruitful relationship, co-writing many of her hits together. How did you guys start writing?

My husband co-produced her first three records. I sang all the backgrounds on all the records, but the third record was when I got to write with her. I told her, “Look, I realize I’m the producer’s wife, but I have some song ideas I’ve been saving for you. If you just gave me one day, I feel like we could write a bunch of great stuff.” That first day we wrote “White Liar” and “Only Prettier.” We wrote four songs that day, and then she came back and we ended up writing “Virginia Bluebell.” Meeting Miranda and writing with her was a huge turning point.

Now we’re tight, but we don’t see each other all the time, so whenever we do, I feel like it all comes out in songs. The most important thing about writing with someone is not hitching all of your wagons to this one person’s journey. I have written with lots of people and she’s been so supportive of that. She writes with lots of people and I love the songs that she writes with other people. I’m a genuine fan of her and I feel like that’s how our relationship throughout the years has been able to grow and keep us together. That’s why we keep musically going back to each other.

Was “White Liar” your first cut?

My first cut was with a Christian artist, Rachael Lampa. I wrote a song called “When I Fall.” It was single for her on Christian radio. I was so excited about that.

My first [country cut] that was a really big turning point for me was with Lee Ann Womack. She cut a song of mine that I did not write for anybody, I wrote it for myself with Daniel Tashian. We wrote a song called “The Bees.” It was on her Call Me Crazy album. It wasn’t a single or anything, but she got Keith Urban to sing on it with her. Everybody started calling me after that song, saying, “I love that song. I want to write some time.” So it wasn’t a single, but it was definitely a song that opened so many other doors. In addition to being a hit songwriter, you’ve also released a lot of music as an artist. Do you have any trouble with separating your artistry with writing for other artists?

Honestly, it’s been pretty natural for me. I write so many different kinds of music that I can compartmentalize things. [My first record] Puxico was a love story to my family and to a town that I love. To me, nobody could do those songs justice like I could. I could pitch it around to a thousand people, people could cut it, but it just meant the world to me. With my new record, those songs have been sitting around for a while. Sometimes you have to say to yourself, “Maybe no one has cut these songs because I need to cut them.” (Laughs) I wanted to make a 1990s-Lilith Fair-Sheryl Crow-Tracy Chapman-type of record. All those female artists that I loved from Lilith Fair. So I took those songs and made that record with them.

What did you think of the Music Row community before you became a part of it?

Here’s a little truth serum. When I was growing up, I don’t know if it was because I was intimidated by it a little bit, but I did think of it as a boys club. I was young at the time and I thought people probably thought I sang really good but didn’t really take me seriously. With that respect, when I was younger it was hard to take myself seriously because I never felt like I quite fit in on Music Row. It’s not really anyone’s fault, it’s just what it was at the time. But as things progressed and I’ve gotten older, I feel like a lot of things have changed. There’s so much more diverse music and people. It’s been a nice change. Nashville was a small town back then, and it’s hard for [diversity] to be present in a small town. But as it has grown, it’s been forced to take a look at itself.

If I’m being honest, my husband has been a huge mentor to me. I’ve almost quit so many times that he hasn’t let me, and part of the reason why people like my music is because of him. He is my music and I can’t imagine doing it without him.

I wouldn’t be here if Jody Williams wasn’t here. I used to sing all his demos at his company. My husband would produce those demos and that’s how I met my husband. Jody literally kept my lights on because he paid me so well when I sang demos. When he went to BMI, he got me a couple of really big co-writes. He showcased me and I would go meet with him and play songs. He was so supportive of me. And now he’s representing me in publishing, so it’s been a real full circle moment. I’ve gone to him for advice, I’ve gone to him for so many different situations and he has been a guiding light in my career. I would want them to say that I was kind, genuine, and sincere. That I never used them to get anywhere. I grew up in this town so I’m constantly searching for that quality in people—the sincerity in the love of music and for friendship. One of the things I always tell my friends is, “Hey, we’re friends beyond music.”

What moment have you had that your little kid self would think is so cool?

Singing with Dolly Parton. That was pretty cool. (Laughs) Dolly is like the female Santa Claus. You can’t stop staring at her. She goes around and talks to everybody, looks everyone in the eye. My young self would have been so enamored with her.