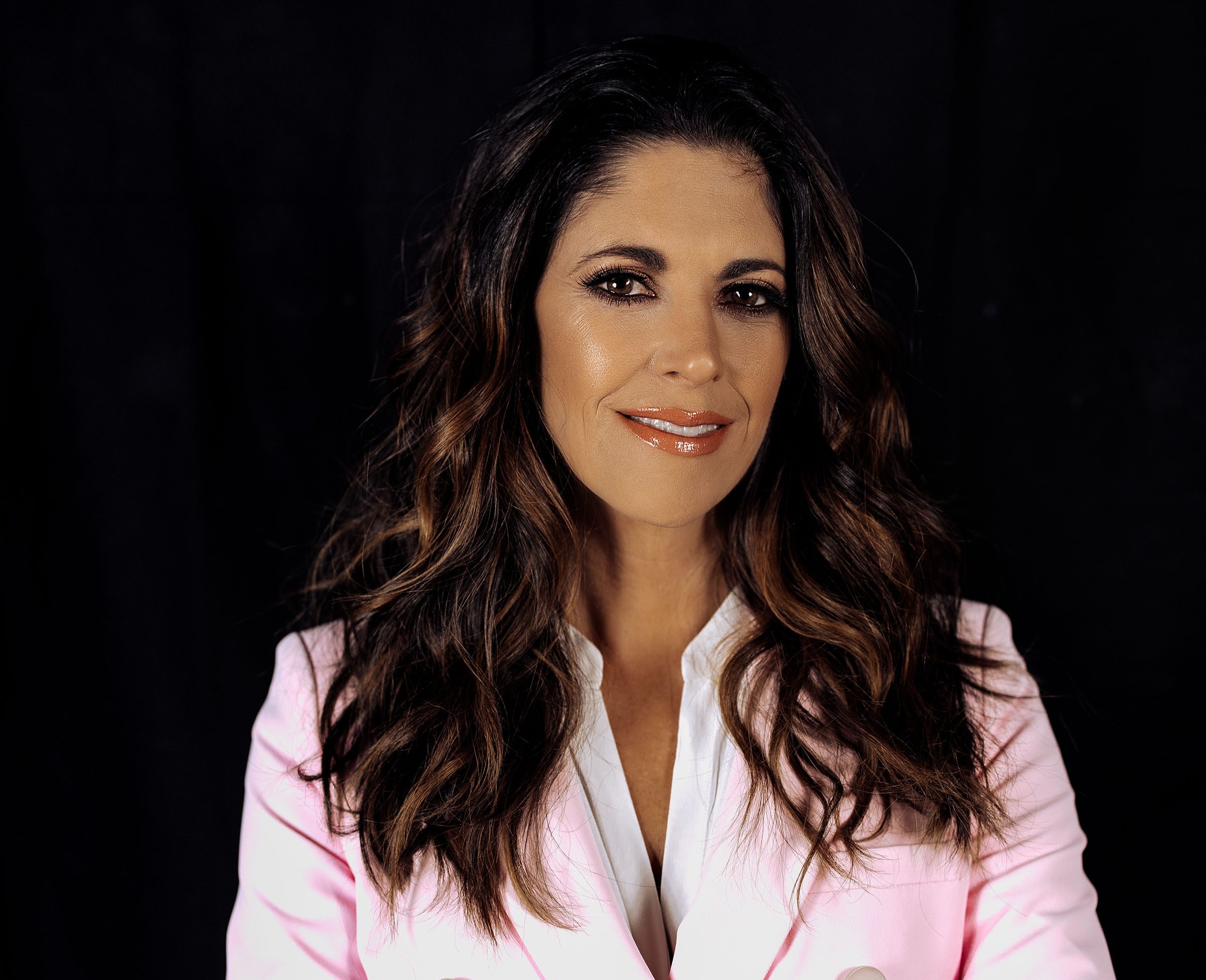 As the founder and president of management firm KP Entertainment, Kerri Edwards is a key figure in the careers of country stars Luke Bryan and Cole Swindell.

The West Virginia native started her career as an intern while studying at David Lipscomb University in Nashville. Edwards interned at Arista Records, and was eventually brought on to the staff who helped guide the careers of Alan Jackson, Brooks & Dunn, Pam Tillis, Diamond Rio and other ’90s country greats.

Edwards later joined EMI Music Publishing, followed by the High Five video production house, and then took a job with producer Mark Bright, before landing at Murrah Music. That’s where she met Luke Bryan, a staff writer at the time, and would start working with him to help further his career.

Now a decade into management, Edwards is the ultimate insider, involved in the touring, publishing, branding and business decisions for some of the genre’s most-sought-after performers. She spoke with MusicRow about her journey to the top, and the special moments along the way. 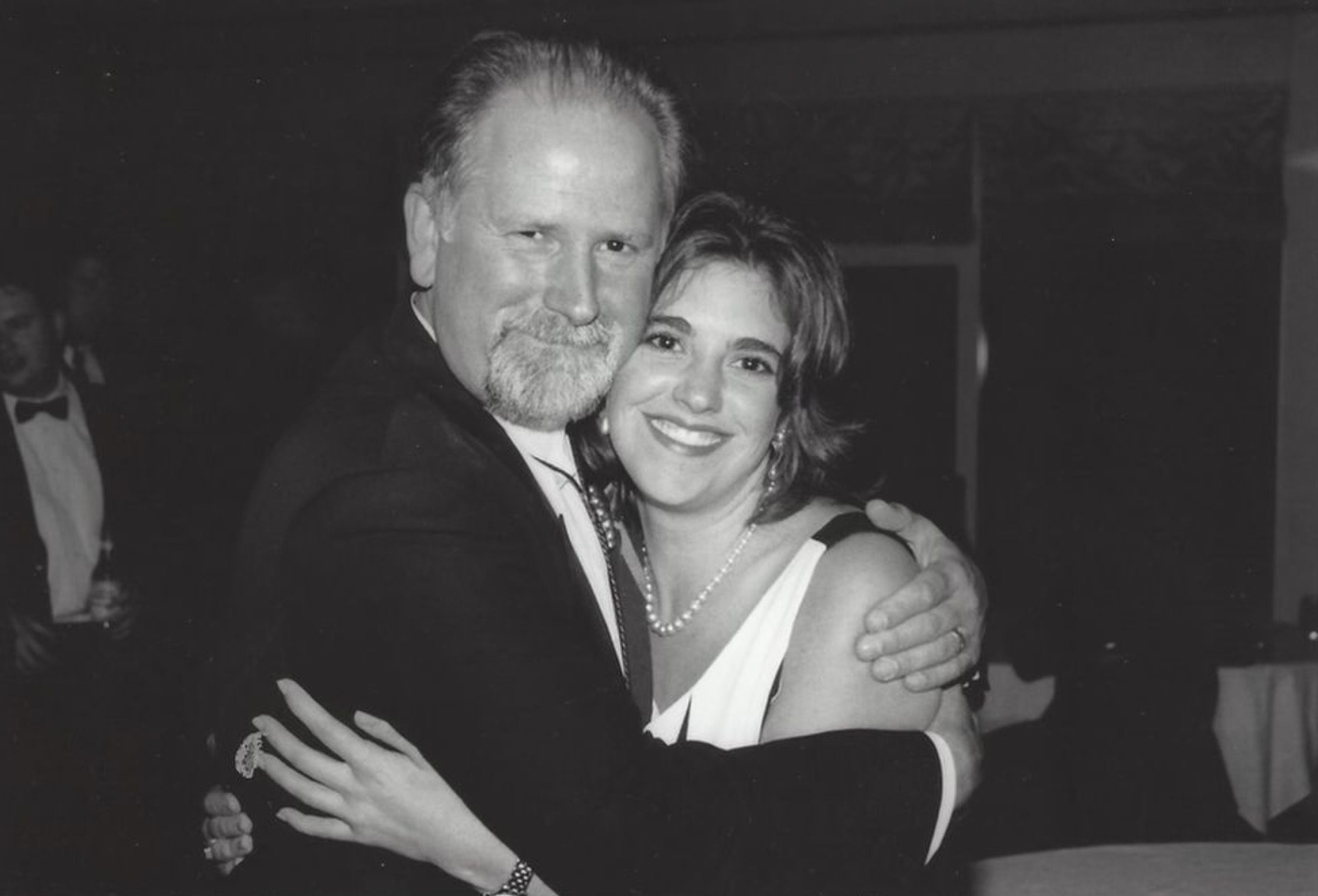 MusicRow: You started your career at Arista Records. Tell me about those days.

Arista then was ran by Tim DuBois and it was a smaller label. What was awesome about that was you learned a ton of stuff because you heard everything that was going on—whether it was somebody calling a radio station or the mail room guy getting the stuff that was shipping out for somebody’s next single, you just overheard everything. I interned there probably a year and a half and then graduated and they found a job for me there as an A&R assistant.

I have never been in an environment like that. We were so tight. I don’t know that it would ever be repeated, to be honest. It was just a great era.

After Arista merged into RCA, you went into publishing where you met Luke Bryan. How did your relationship start?

It felt natural for A&R to switch sides to publishing, so I stayed in publishing probably seven years or so. During that seven year period, I met Luke at [Murrah Music], the company where he had just gotten signed to his first publishing deal. I really wasn’t trying to get into management at all, I was just trying to help him find his way in town and figure out how to help him eventually get a deal. I was still pitching songs and working with the other writers.

I went and saw him do a show in Georgia and was truly shocked. I think I’d focused so much on writing and the books and all that, I just wasn’t expecting what I saw on stage. Looking back, he was still obviously very green, but he just had this thing about him.

But even at that point I wasn’t trying to be his manager, I really was just trying to help him. I started calling in favors from writers, begging them to write with this guy. That’s how that started and then we just kept working together. I introduced him to Jeff Stevens, who ended up being his producer. Then we got in with Larry Willoughby, who at the time was an A&R at Capitol. Larry [suggested to Jeff for Luke to keep singing demos]. That’s how all the pieces started falling together. 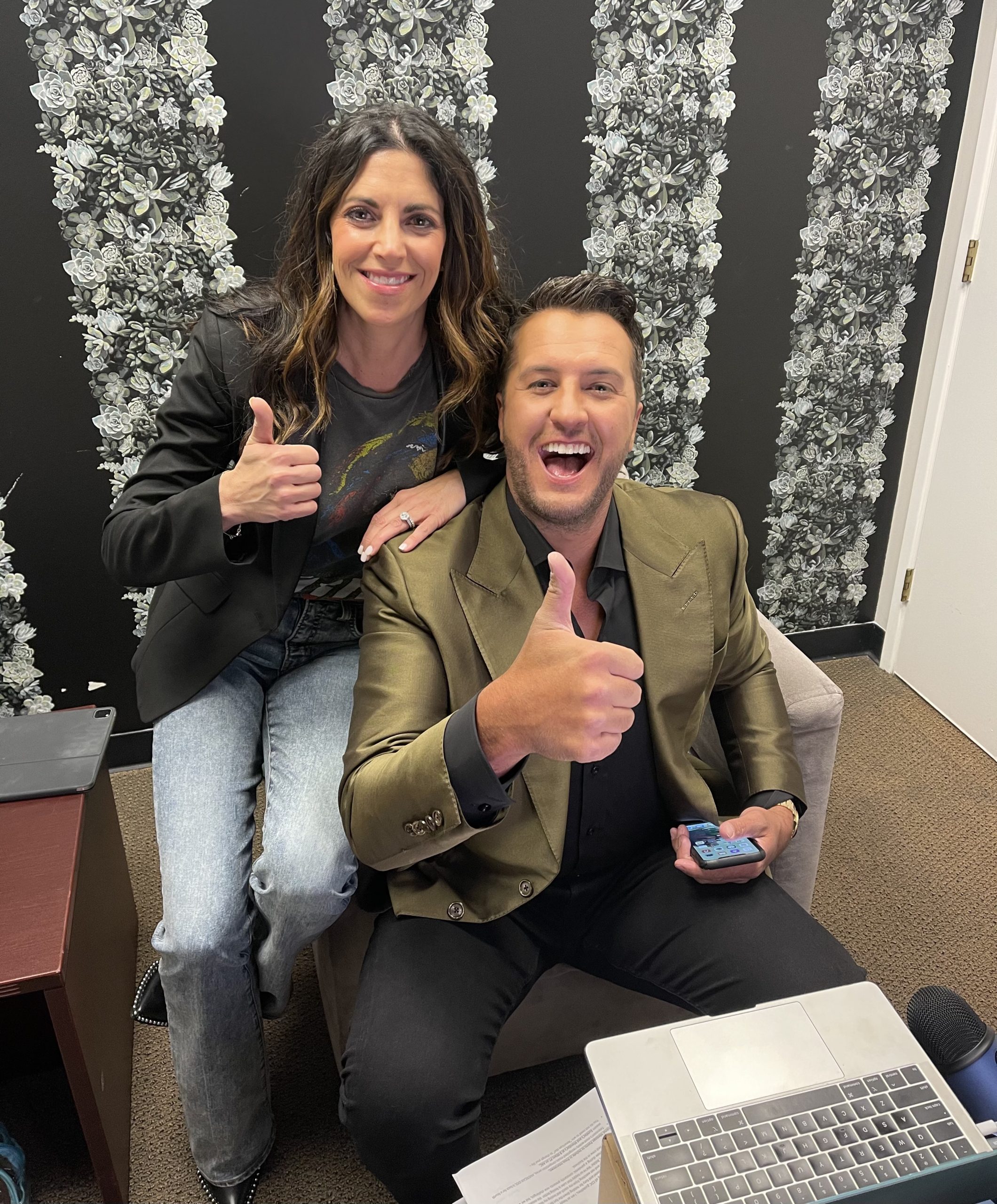 What pushed you into officially becoming Luke’s manager?

Three or four years later, [Mike] Dungan had agreed to sign him. So I took him around to manager meetings, I thought that’s the next step you do, right?

While we were doing that, he had asked me a few times, “Why don’t you just do it?” I was like, “No, I don’t know how to do that. I’ve never done that nor do I think I want to do that.” But then I thought, if I don’t do this, I wouldn’t be working with him anymore—and that kept haunting me. I called Mike Dungan and said, “Luke keeps asking me to do this, but I won’t do it without your blessing. You’re taking a risk on him and I do not want to walk in and you be in a panic that now he has a brand new manager.” So we talked it out and he graciously gave me the nod. Then I just started trying to stay above water.

When did you feel comfortable in your new role as a manager?

I guess when I truly took a breath was with “Do I.” That felt like a big moment for [Luke]. And then “Country Girl (Shake It For Me)” felt really different.

Truthfully, there’s still always a weight in this business no matter what level you’re at. It’s just a different kind of weight. So it’s not like I felt like we had made it, not at all. But I felt like I could breathe for a second at that moment. 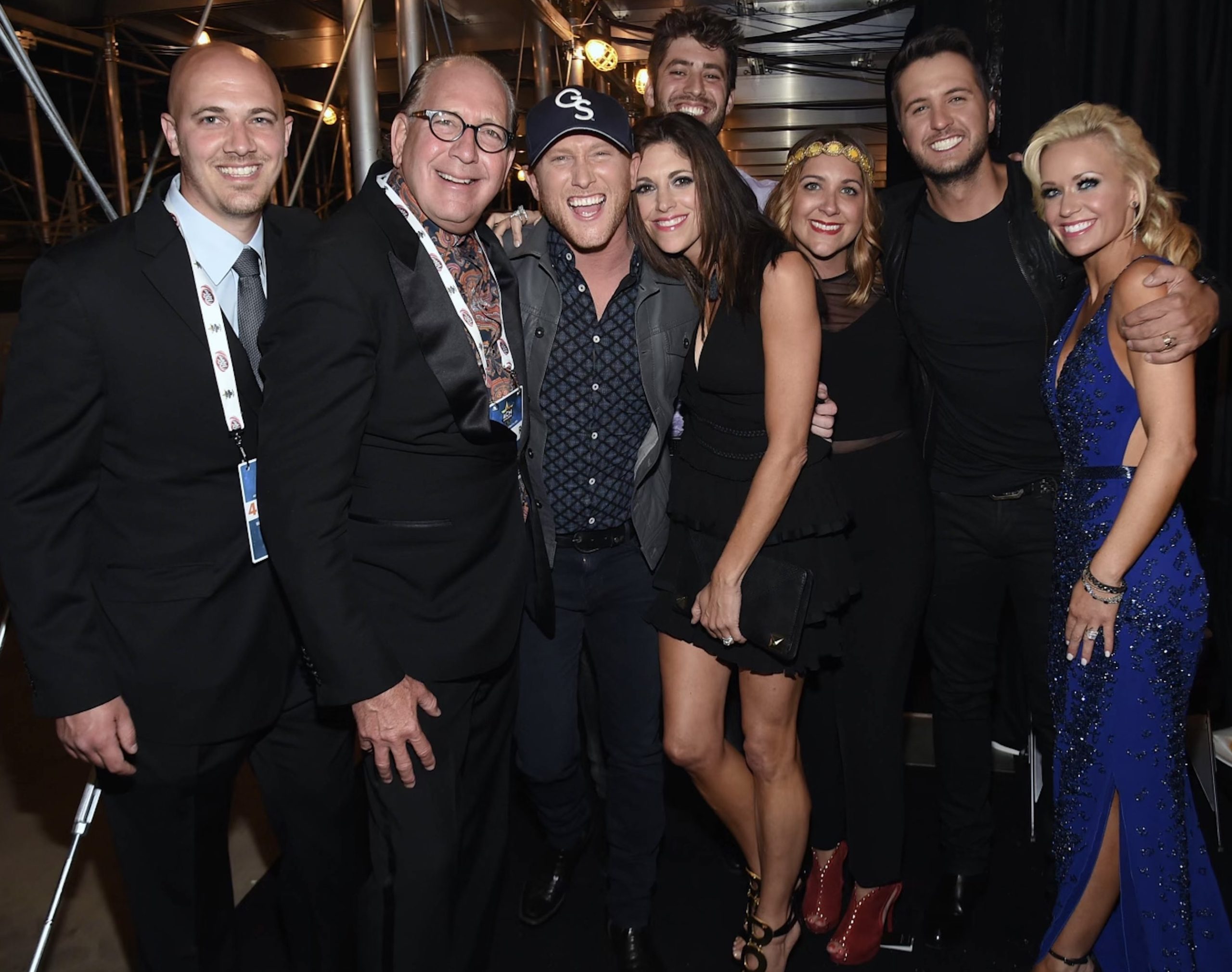 After Luke became established, you added Cole Swindell as a management client, who had worked for Luke for years selling merch. What made you decide to take him on?

He obviously didn’t want to sell merch for the rest of his life. His dream was to start writing songs, so Luke and I tried to help him get a publishing deal. Once that happened…when I say workhorse, that guy started writing and writing. To this day, he is probably one of my favorite writers.

He was pacing. In that moment, with someone staring you down, listening to your song [he was nervous]. I turned it off and he’s like, “Okay, well I probably just got excited.” I just looked over and said, “Cole, do you really want to do this artist thing? Then that’s it.” He was like, “Oh God, I thought you hated it!” (laughs)

Now KP Entertainment has grown to include Dylan Scott, Jon Langston, CB30, DJ Rock and Whitney Duncan. How did you build your team?

I had teamed up with Red Light and Coran [Capshaw] on Luke early on. I still had a standalone office, but I didn’t really have that many employees. I was still doing most of it by myself. Then Waylon Weatherholt came on the team from Capitol Records. He’s been with me 12 years now, but it was he and I forever. It was just so busy, I couldn’t stop to even realize I needed more people. But once I did start hiring a few people, it was obviously life changing. I have great people here. They’re so awesome.

I truly still pinch myself that I get to work in music every day. I really do love it. The minute that I walked in that Arista door, not even understanding what I was about to get into, I’ve never not felt that. Luckily that feeling has truly stayed this whole time. 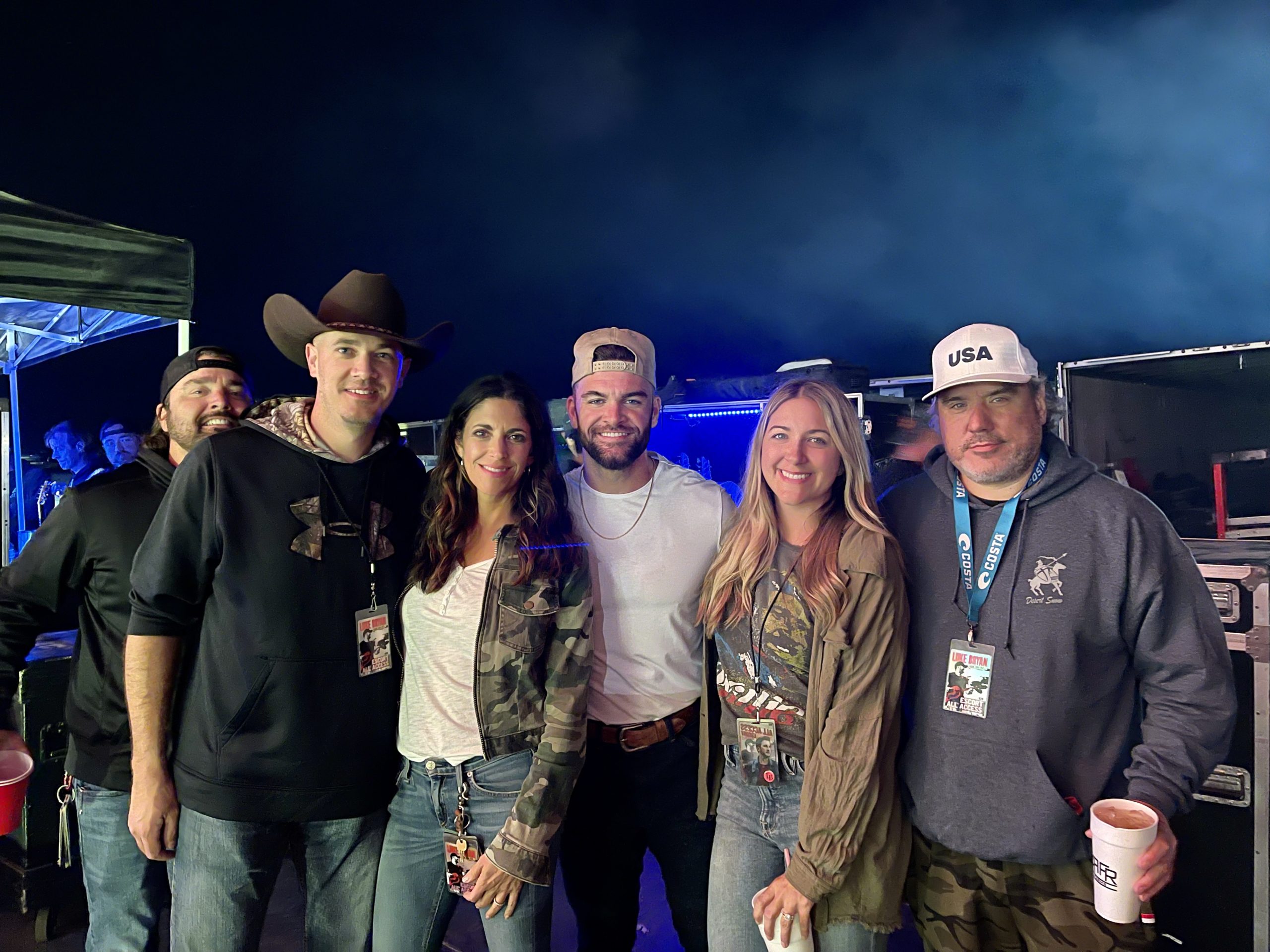 What’s something that people may not know about you?

I still do publishing stuff. I’m not in it every single day, because I can’t be, but I love it. It’s not something I’ve hung a separate sign for, but we have seven writers under our umbrella and it’s still something I’m super passionate about.

If someone says “old school Music Row,” what do you think of?

I just go to community. We’re competitive, but we would kill for each other. Even our artists do that with each other. They’re competitive, they don’t want to lose to the other one, but they also are truly great friends. I think that is a special thing in the country music industry.

What is some of the best advice you’ve ever gotten?

I go back to something my parents have said about finding that thing that makes you happy. I do truly feel like I was blessed to find that and fulfill it. I surround myself with artists that I’m super proud to represent. Not to sound cheesy, but I really do feel like I have the best staff. It’s all mind blowing some days with some of the things that they have accomplished with our clients. I guess it’s just surrounding yourself with the people that keep you going and bring out the good in you.