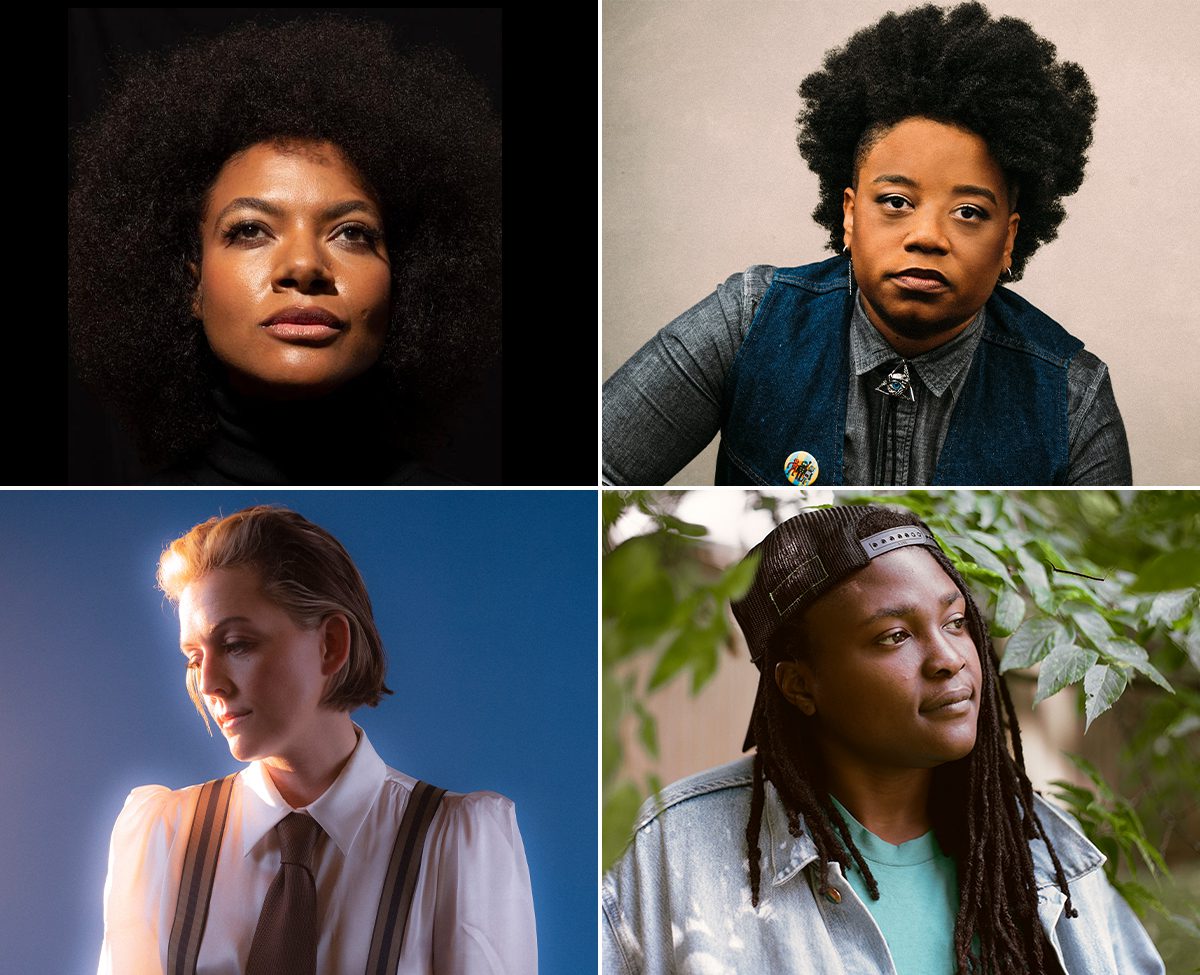 This is some kind of landmark day.

DisClaimer’s round-up of current Americana releases is completely dominated by Black Nashvillians. Three of them—Amythyst Kiah, Joy Oladokun and Allison Russell—are newcomers to the column, so they share the DisCovery Award.

Keb’ Mo’ has long been a community standout. He is an enduring DisClaimer column fave, as are Tiera, Yola and Gramps Morgan. By the way, former Memphian Valerie June is now a Nashvillian, and she is up for Album of the Year at next month’s Americana Awards.

Speaking of those awards, non-Nashvillians Brandi Carlile and Rhiannon Giddens are longtime AMA award favorites, and both are here with new music. Representing the alt-country side of things are Rodney Crowell, Grant Maloy Smith and John Scott Sherrill.

In this embarrassment of riches, Brandi Carlile gets the Disc of the Day, but it could have just as easily gone to any of her 11 Americana compatriots here.

YOLA / “Stand For Myself”
Writers: Dan Auerbach/Hannah Vasanth/Natalie Hemby/Yola; Producer: Dan Auerbach; Label: Easy Eye
— This British-born, Nashville-based troubadour reunited with Dan Auerbach to produce her sophomore CD. Yola has been showcasing its single “Diamond Studded Shoes” everywhere from the Newport Folk Festival to NPR’s “All Things Considered,” from a live stream today (www.momenthouse.com/yola) to her tour with Chris Stapleton. She recently performed “Stand For Myself,” the disc’s title tune (and her latest video), on Stephen Colbert (with Oscar winner Jon Batiste on piano, no less). The empowering ode reflects the album’s emphasis on nouveau funk-groove and stakes her claim as one of today’s greatest soul singers. This has intense fire.

BRANDI CARLILE / “Right On Time”
Writers: Brandi Carlile/Dave Cobb/Phil Hanseroth/Tim Hanseroth; Producer: Dave Cobb/Shooter Jennings; Label: Low Country Sound/Elektra
— This is the advance single from Brandi’s In These Silent Days, an album due Oct. 1. The six-time Grammy winner sounds even more lustrous and evocative on the gorgeous ballad of loss, regret and relief. Her alto shimmers and her Nashville production team shines in every note. Watch for her to rule the Americana Music Awards next month.

RHIANNON GIDDENS / “Si Dolce e’l Tormento”
Writers: Claudio Monteverdi; Producer: Francesco Turrisi/Rhiannon Giddens; Label: Nonesuch
— The song is a 17th-century Italian composition that is included on her latest album, They’re Calling Me Home. Her performance is a revelation and a tour de force of classical control. Giddens glides easily between genres as she explores everything from old-time music to blues, from opera to folk. Her exquisite phrasing here is a window into a continually creative spirit.

RODNEY CROWELL / “Triage”
Writers: Rodney Crowell; Producer: Rodney Crowell/Dan Knobler; Label: RC1/Thirty Tigers
— A dark, doomy percussive thump accompanies Rodney’s ruminations on love and wisdom. It’s the title tune of his new album, and is an absolutely hypnotic, riveting listening experience. His maturity as a composer and his weathered richness as a vocal stylist are both fabulously rewarding here as the song moves from somber musings to hopeful uplift. Essential.

ALLISON RUSSELL / “Nightflyer”
Writers: Allison Russell/Jeremy Lindsay; Producer: Dan Knobler; Label: Fantasy
— Outside Child, the debut solo album from this Our Native Daughters alumna is a singer-songwriter treasure. Its single is a fever dream of pain and glory that contrasts images of violence and peace in a swirl of airy harmonies and light acoustic instrumentation. It begs you to close your eyes and drift away to a better place. This is the birthplace of a major new voice in Americana music. Take heed, everyone.

JOY OLADOKUN / “Judas”
Writers: Joy Oladokun/James Droll/Steven Colyer; Producer: Joy Oladokun; Label: Amigo/Verve/Republic
— In Defense of My Own Happiness came out last year as the debut album by this Nigerian-American songsmith. Previously self released, it has been picked up by a major label and reissued in a deluxe edition featuring this new track. The East Nashville resident is a folkie at heart. Armed with her acoustic guitar, she touches your heart with its plain-spoken, soul-baring, confessional poetry. Classic sounding.

JOHN SCOTT SHERRILL / “Five Generations of Rock County Wilsons”
Writers: John Scott Sherrill; Producer: John Scott Sherrill/ Ronnie Bowman & Scott Paschall; Label: Lobo Libre
— This enduringly great craftsman is going into the Nashville Songwriters Hall of Fame this year in recognition of the zillions of hits he’s written for John Anderson, Brooks & Dunn, Strait, Wariner, Patty, Allison, Buffett and more. Scotty also makes consistently cool records, himself. His latest is titled Copper Tears, and its single is this terrific story song about the destruction of a boy’s countryside and its signal to escape on the next Grayhound Bus. The instrumentation is bluegrassy while his vocal is an effortless honky-tonk croon. This fellow is such a wonderful artist.

GRAMPS MORGAN / “If You’re Looking For Me”
Writers: Gramps Morgan/Johnny Reid/Morry Trent; Producer: Johnny Reid; Label: Halo/WAMA/Orchard
— The leader of the Grammy-winning reggae band Morgan Heritage has a new solo album titled Positive Vibration. The Jamaican-American artist demonstrates here the influences that living in Nashville have brought him. His reggae groove has acquired some production polish, extra melodic gloss and layered vocal harmonies. He’s such a marvelously expressive singer and the groove is so addictive that you don’t want it to ever stop. I’m a major fan.

AMYTHYST KIAH / “Black Myself”
Writers: Amythyst Kiah; Producer: Tony Berg/Amythyst Kiah/Will Maclellan; Label: Rounder
— Her vocal alto is a thing of wonder. Here, she applies it to an accusatory lyric addressing the hypocrisy of Christians who condoned slavery. The rocking track blends electronic thunder with acoustic punch and is way, way gripping. This Nashvillian is a gigantic addition to our songwriting community. Like Allison Russell and Joy Oladokun, Amythyst is nominated as Emerging Artist of the Year at next month’s Americana Awards. In addition, “Black Myself” is up for Song of the Year.

TIERA & BRASSVILLE / “Found It In You”
Writers: Tiera/Cameron Bendell; Producer: Cameron Bendell; Label: Songs & Daughters
— This fan-favorite track has a studio version, an acoustic version and now a live version featuring an eight-piece brass band. No matter how you frame it, the sweetly lilting tune is a highly successful fusion of her R&B and country influences. The Birmingham native is one of the flagship songwriters of Nicolle Galyon’s Songs & Daughters female collective in Music City, and this week she signed with Big Machine/Valory. Yippee.

GRANT MALOY SMITH / “I Found Faith”
Writers: Grant Maloy Smith; Producer: Jeff Silverman & Grant Maloy Smith; Label: Suburban Cowboy
— One of the year’s most ambitious productions is Smith’s Appalachia: American Stories. The vinyl version comes in a box with a 40-page color-illustrated book of lyrics, liner notes and background information on every song. He is accompanied by a who’s-who of acoustic musicians during its 43-minute running time. in addition to its “The Coal Comes Up” single, the set includes this searing gospel outing. Smith’s captivating tenor is joined by the soul harmonies of Kim Fleming and Kim Mount, plus a recitation by the Rev. Janice Brown, a Nashvillian famed for her smash “Rough Side of the Mountain.”