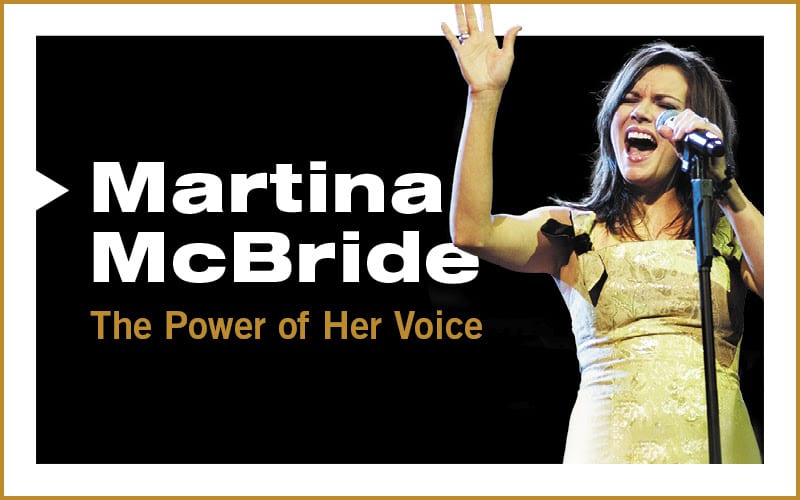 Martina McBride‘s three-decade career will be highlighted in a new Country Music Hall of Fame and Museum exhibit, Martina McBride: The Power of Her Voice, opening July 30 through Aug. 7, 2022.

The exhibit encompasses the singer’s journey from her formative years performing in her family’s band as a child to becoming an award-winning country artist with an enduring career. Known for hits including “Independence Day” and “A Broken Wing,” the Kansas native released her major label debut in 1992 and had her first top ten on the Billboard country chart in 1993 with “My Baby Loves Me.” Inspired by forerunners such as Linda Ronstadt, Reba McEntire, and Connie Smith, McBride helped further modernize the image of female artists in country music, choosing material that often highlighted women’s strengths.

McBride’s second album, The Way That I Am crossed the million-seller plateau in May 1995 and began a streak of Platinum albums stretching into the 2000’s. She won four CMA Female Vocalist of the Year awards, three consecutively (1999, 2002-2004), and three consecutive ACM Top Female Vocalist honors from 2001–2003, and in November of 1995, she became a member of the Grand Ole Opry. After years of crossover pop success, McBride returned to her roots in traditional country with her 2005 album, Timeless, and albums that followed from 2007 to 2016 reached the Top Five on the country album chart. In 2015, she became a lead voice in combatting the dwindling airplay given to female country artists, and the Academy of Country Music presented her with the Cliffie Stone Icon Award in 2019 for her contributions to country music.

In support of the exhibit’s opening, McBride will participate in a conversation and performance in the museum’s CMA Theater on Sunday, Aug. 1 at 2 p.m. where she will discuss her career and share personal stories and memories associated with the artifacts included in the exhibit. Tickets will be available at the Hall of Fame’s website on Friday, July 2.

“Martina McBride has been creating powerful, socially conscious country music for more than 25 years,” says museum CEO Kyle Young. “Her anthems of personal empowerment have addressed the challenges women face and contributed a much-needed perspective to the genre. The empathy at the core of her music informs her life offstage, where she advocates for female artists.”

“Postponing the exhibit opening last year due to the pandemic was a difficult decision but the right one,” shares McBride. “It did, however, allow us more time to plan and dig through my archive to find several truly special artifacts. I’m excited to finally be able to let everyone see what we’ve created. Having an exhibit in the Country Music Hall of Fame and Museum is something I’ve had on my dream list for a long, long time. Being able to share moments and mementos from my life and career with my fans and country music fans from all over the world is both humbling and exciting. I’m so grateful to be a part of country music.”