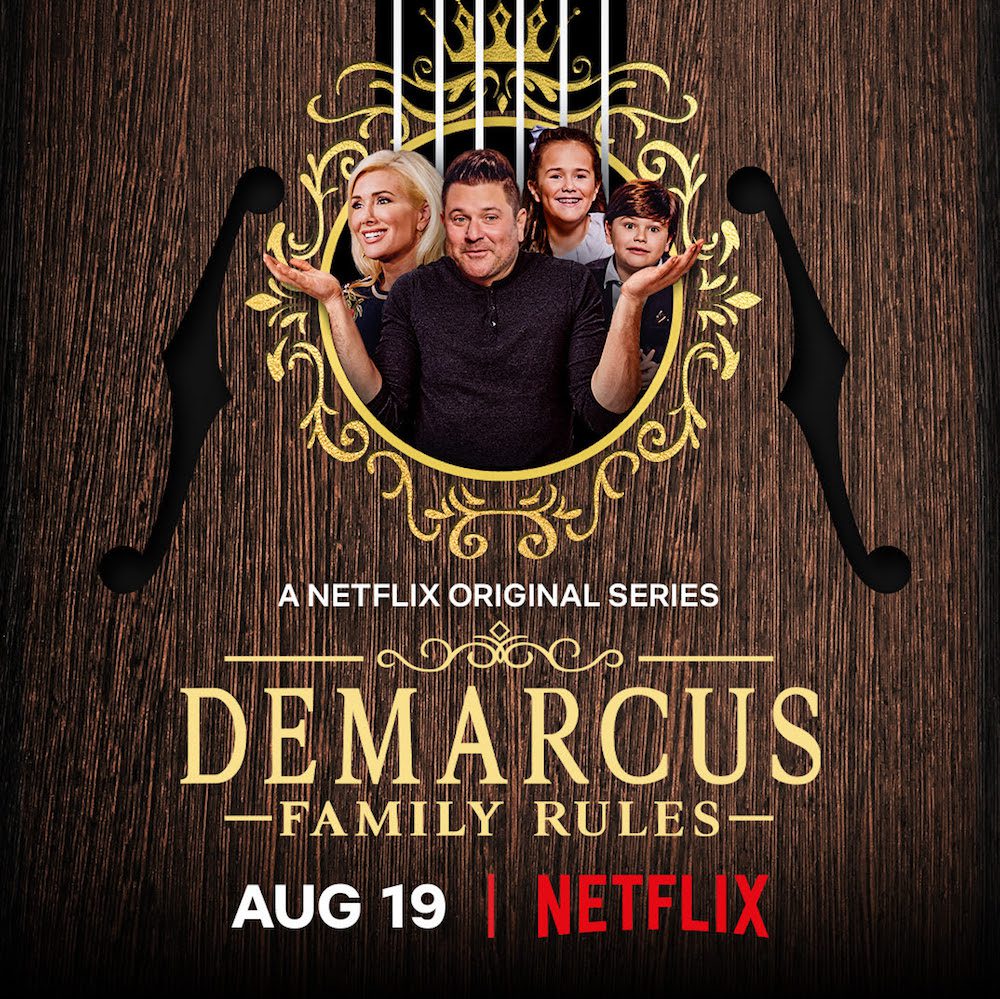 As one-third of superstar music trio Rascal Flatts for the past two decades, Jay DeMarcus is no stranger to the camera, whether that means appearing on awards shows, television interviews or performing at CMA Fest.

He has also been remarkably open about both the mountaintop highs that come with performing as part of a group that has earned 17 No. 1 hits and sold more than 23 million albums, as well as the darkest times in his life and career, when he released the book Shotgun Angels: My Story of Broken Roads and Unshakable Hope in 2019.

Starting today (Aug. 19), music fans and Netflix users can get an unfiltered, behind-the-scenes look at what life is like in the DeMarcus household, tucked in Nashville away from the concert stages and awards shows, in the new Netflix series DeMarcus Family Rules.

Unfolding over the course of six episodes, DeMarcus Family Rules centers on Jay and his family, including his wife Allison DeMarcus, a media personality and Triple Crown beauty pageant winner-turned-co-executive director of the Miss Tennessee pageant, as well as their two children, Madeline (age 9) and Dylan (8).

The series, produced by Maverick TV USA, All3Media America, and Todd Chrisley Productions, follows the family as they juggle busy schedules, and navigate family relationships and differing parenting styles (with Allison being the more rule-oriented parent, versus Jay’s more free-wheeling style). Jay says a conversation with their close friends, Todd and Julie Chrisley of Chrisley Knows Best, set plans in motion for the show.

“We’d appeared on the Chrisley Knows Best show a handful of times, and Todd and Julie live right around the corner,” Jay says. “After we had been on there, we went to dinner one night and Todd said, ‘You know, I’ve never done any [shows] outside of my own family before, but I think you guys have a show. The way you are with each other, and your kids are so funny and unpredictable.’ He felt people would enjoy seeing a peek behind the curtain of what it’s like when I come home off the road.

“We had our little trepidations about having cameras follow us everywhere but the more we talked about it, the more he laid our fears to rest that he would protect us and make sure we were presented in the best light and protect the brand I had built with Rascal Flatts, which was important to me.”

A film crew joined the family to capture footage for the episodes over the course of three months from October through December last year.

“They filmed everything from our daughter’s birthday party to Thanksgiving,” Allison says. “With our kids, we are all normally running in 100 different directions—or at least we were at that time, obviously everything came to a screeching halt in March. But it was all filmed pre-COVID.”

“We didn’t map out anything,” Jay adds. “They just asked us what we would normally be doing during that time and I said, ‘I’m just getting off the road and it’s a big enough deal to try to come home and re-introduce myself into the family circle here, so they filmed a bunch of that. And they shaped the episodes after it was all filmed. We did a Thanksgiving scene where everyone came to town and this particular time was different from us because it was the first time our entire family was all around the table since Allison’s father had passed away in 2016. So we were dealing with a lot of deep things while the cameras were here.”

They say their children—especially son Dylan—adapted easily to the film crews.

“Our son [Dylan] is Jay’s child, so he does not mind the camera being around at all, and would honestly prefer if a camera was around all the time,” Allison says. “He was upset when people were leaving; he really wanted the cameras to come back. Madeline is a little more shy and reserved, so it took her more time to get used to things. But because we had been on the Chrisley’s [show] several times, it didn’t throw them too badly because they had had those experiences which I think put them and us at ease with the process as well.”

Though Jay’s Rascal Flatts bandmates don’t appear in the first episodes, he says there is a possibility they could appear on future seasons. For now, Jay, Allison and their family are watching the series’ first six episodes on Netflix alongside everyone else.

“We haven’t seen any of the final episodes,” Allison says. “We are going to be watching it when everyone else does. We are excited to see what their take was after they had stayed with us for weeks and how they pieced it all together.”

“We hope that everyone that watches the show will see a little bit of themselves in our family, and see that we deal with the same kinds of issues with kids, with our spouses and with whatever life throws at us,” Jay sums. “In a lot of ways, Allison and I feel like we are learning every day how to juggle the responsibilities of being good marriage partners, good parents and good family members. I hope people can identify with us and at the end of the day can laugh at themselves like we have done a lot through this process.”