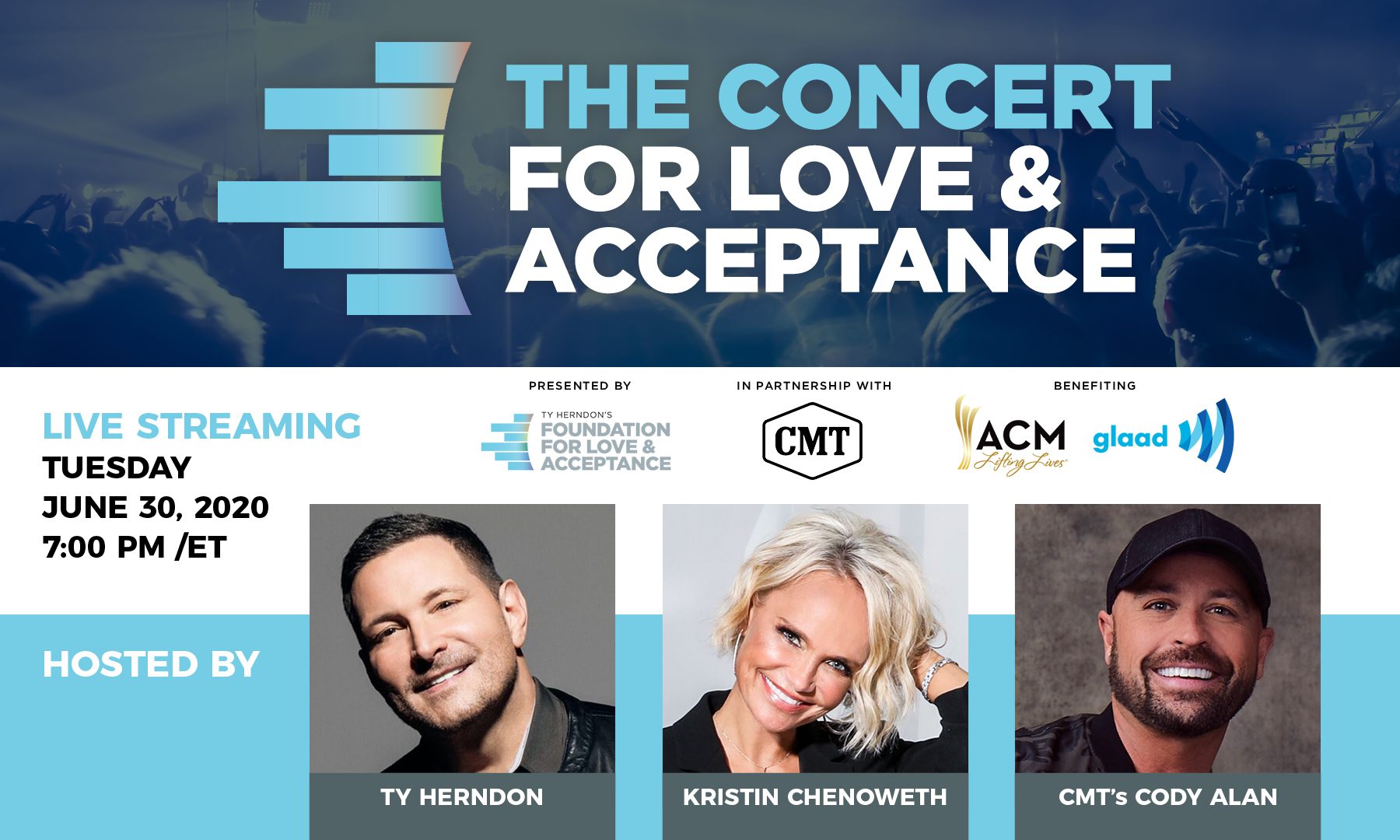 Hosted by Herndon, Emmy- and Tony Award-winning actress and singer Kristin Chenoweth, and CMT’s Cody Alan, the event benefited GLAAD and ACM Lifting Lives and was presented in part by CMT.

Actor and comedian Leslie Jordan kicked the Concert for Love & Acceptance off. “Speaking of love and acceptance, I love country music,” Jordan gleamed.

Tanya Tucker performed the first piece of music for the evening, expertly delivering her Grammy-winning “Bring My Flowers Now” with piano accompaniment. 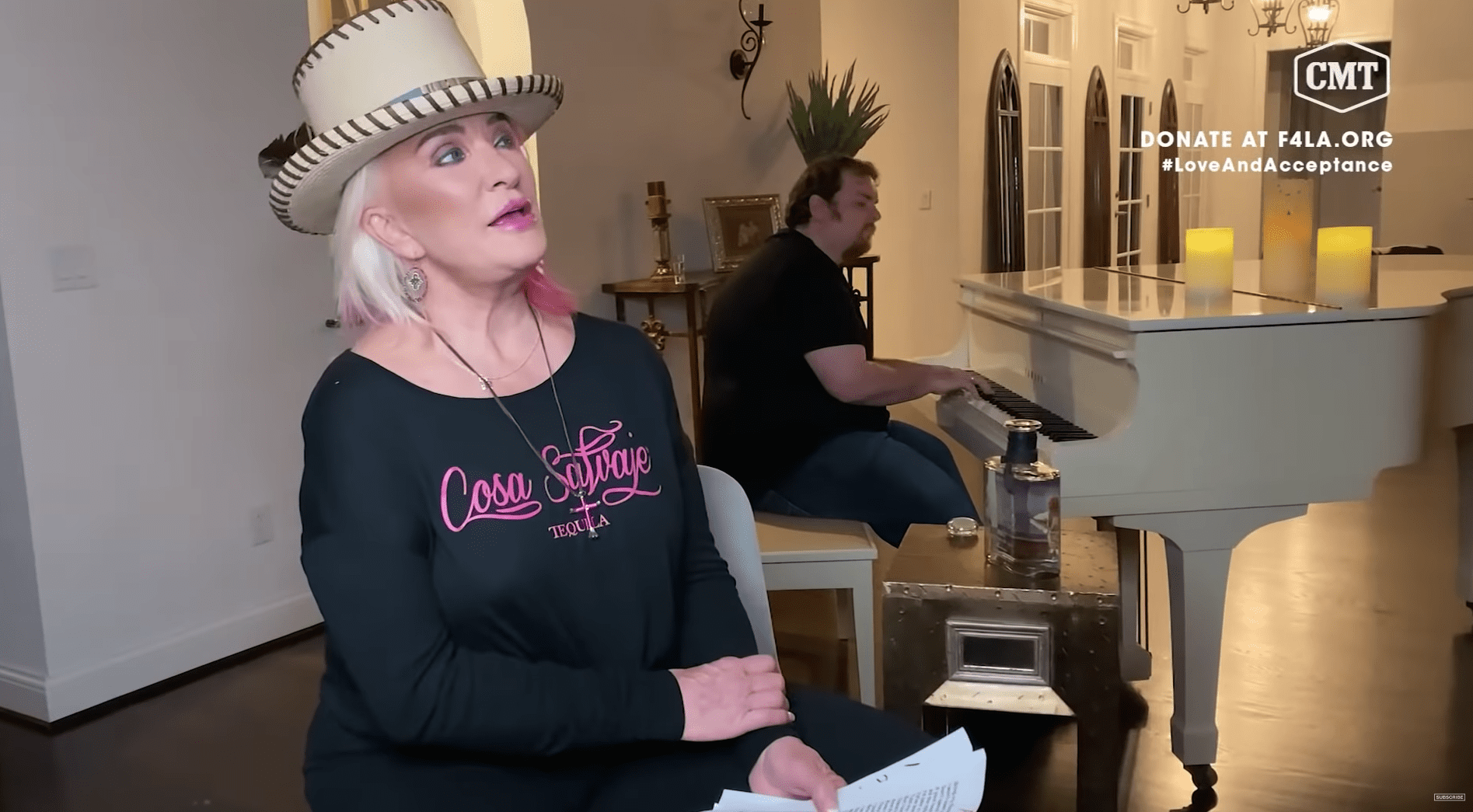 Jake Owen played an acoustic version of his radio single “Made For You” from his porch. “Everybody’s made for somebody,” Owen said. Brett Young followed that up with “Lady.”

Kalie Shorr expressed that the cause was close to her heart, and played an ever-appropriate, stripped down version of her rocking “Angry Butterfly.” Lewis Brice followed Shorr with his dreamy “It’s You (I’ve Been Looking For).”

Mickey Guyton made an appearance to support the cause. “We have a long way to go when it comes to loving one another and accepting and celebrating one another just as we are, but I’m proud to be in the first with all of you,” Guyton said.

Hit songwriter Shane McAnally expressed gratitude to live in a moment of change, and said there is still work to be done before playing a shortened version of his anthemic hit with Kacey Musgraves’ “Rainbow.” “I hope everyone who hears this and sees this feels included,” McAnally said. Country singer Wendy Moten performed a cover of George Jones’ “Walk Through This World With Me.” Michael Ray followed Moten with his 2017 hit “Think a Little Less.”

Actress, producer and singer-songwriter Rita Wilson performed her new song, “Where’s My Country Song?” She then presented Chenoweth with the 2020 Foundation of Love & Acceptance Rally Award. “She is tireless in her efforts to make the world a better place,” Wilson said of Chenoweth. Chenoweth wasn’t the only award winner of the evening. Herndon also presented country newcomers Shelly Fairchild, Harper Grae and Brandon Stansell with the first-ever Rising Star Award.
“I’m excited to honor three LGBTQ rising stars in country music,” Herndon said. “They’re each a pioneer in their own right and tonight we’re proud to present each of them with our first-ever Foundation for Love & Acceptance Rising Star Award. These are my friends, and they’re so magnificent.”

Lauren Alaina showed off her always beautiful voice on her “Getting Good,” and Chenoweth followed it with her gorgeous voice on a interwoven performance of Willie Nelson’s “Always On My Mind” and “Losing My Mind” from the musical Follies.

Everette sounded great on a new tune, “Gonna Be Okay,” and Terri Clark played an acoustic version of her “No Fear.” Viewers were also treated to performances by Billy Gilman, Jamie O’Neal and Dennis Quaid.

The Indigo Girls gave one of the best performances of the night with a new song, “Country Radio.” “I wanna know what it’s like to fall in love like most of the rest of the world / But as far as these songs will take me is as far as I’ll go / I’m just a gay kid in a small town who loves country radio,” the Indigo Girls sing with their classic harmonies.

Founder and host Herndon closed the show with an expertly done version of his 1996 hit “Living In A Moment.”