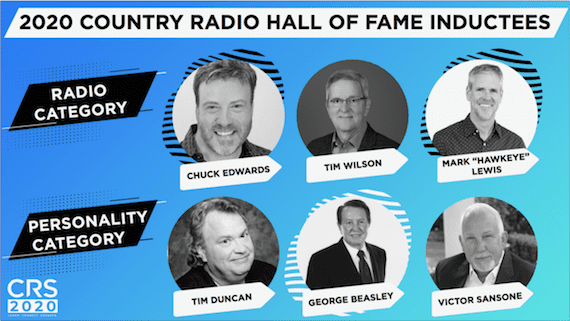 Jim Duncan: 2019 marked Duncan’s seventh decade in country radio—all of them in major markets, where his career touched all corners of the radio business, including weekend air talent; morning show host; music director; program director, and syndicated radio. His influence on country radio reached beyond his local market, as he represented the industry on the CMA, and CRB Board of Directors. For nine years, Duncan served as VP and Country Editor for legendary trade newspaper, Radio & Records. In that role, he was a true ambassador for country radio, and the music industry, and was instrumental in the career development of many industry professionals who went on to be our format’s most influential leaders.

Victor Sansone: During an illustrious, 34-year career with Capital Cities/ABC/Disney, first on the sales management side, and eventually, in the general manager role, Sansone oversaw two, legendary country radio properties, in two of the largest, and most important country markets in America: Dallas, and Atlanta. He arrived at KSCS/Dallas in 1987 and guided the station to ratings and revenue triumphs. KSCS stayed atop the overall market rankings for 21 consecutive rating periods. He repeated that success upon his move to Atlanta in 1997, with a 10-year run of similar rating and revenue dominance with WKHX. His leadership qualities were called upon at a national level, as he served on the CMA Board of Directors, rising to President and Chairman, where he made a difference by protecting radio’s interests and point of view.

George Beasley: George Beasley has logged 58 years in the radio industry, serving as founder, chairman, and CEO for Beasley Media Group, which currently owns 64 radio stations in 15 large and medium markets across the United States. One of those properties is country powerhouse WXTU/Philadelphia, one of the most consistently successful country radio stations in America.

Tim Wilson: 26 of Wilson’s 45 years in country radio were spent at one station: WAXX/Eau Claire, Wisconsin, where he served as PD, MD and, air personality. The radio station—and, he personally—were deeply embedded in the community through participation in local events and fundraisers for important causes. He also donated his time as an advisor for Future Business Leaders of America at Eau Claire Memorial High School and for Phi Beta Lambda at the University of Wisconsin Eau Claire. His efforts, and those of the station to popularize country music in the Northlands by way of artist support, industry relations, and advocacy for the genre garnered high ratings for WAXX, but reached national proportions too, with recognition as CMA Personality of the Year; CMA PD of the Year; Billboard PD, MD, and Personality of the Year honors, and the NAB’s prestigious Marconi Award.

Chuck Edwards: For the past 20 years, Edwards has been a country radio mainstay at WYCD/Detroit, where he co-hosted afternoons with fellow CRHOF member, the late Linda Lee for 16 successful years. He is currently helming the station’s morning show. His country radio roots date back to 1983, when he started in Knoxville, but was soon lured to Memphis for a brief stint, before joining legendary KSCS in 1986 for afternoons. After 13 successful years in Dallas, he moved to the Motor City, and became a fixture there. During his time in the Motor City, Edwards has been honored on a local and national level, with the 2011 CMA Personality of the Year, Michigan Association of Broadcasters Broadcaster of the Year, plus multiple ACM personality nominations, and Marconi nominations.

Mark “Hawkeye” Louis: It was only a matter of time before Hawkeye found his way to the Country Radio Hall of Fame—he’s been surrounded by fellow Hall Of Famers his entire career, starting at KAJA/San Antonio early in his career, with time alongside 2015 inductee, Randy Carroll. For the past 29 years, he’s been a fixture at KSCS/Dallas, many of those years spent partnered with 2006 CRHoF inductee, Terry Dorsey. His current program director is 2019 Hall of Fame class member, Mac Daniels. Hawkeye has forged an identity and career unto himself during those years, and has become a Dallas radio icon. His current “Hawkeye In the Morning” show on KSCS is the longest-running FM morning show in the Dallas market. He’s given back to the community too—establishing the Mark Rybczyk Scholarship for broadcasting students at his alma mater, The University of North Texas. In 2015, he was honored by Cook Children’s Hospital in Fort Worth for 800 hours of volunteer service, and for starting the annual Cook Children’s Radiothon in 2014.