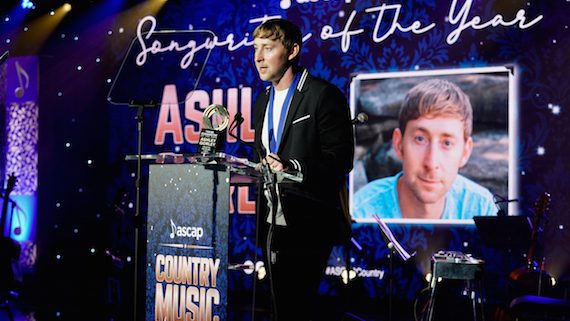 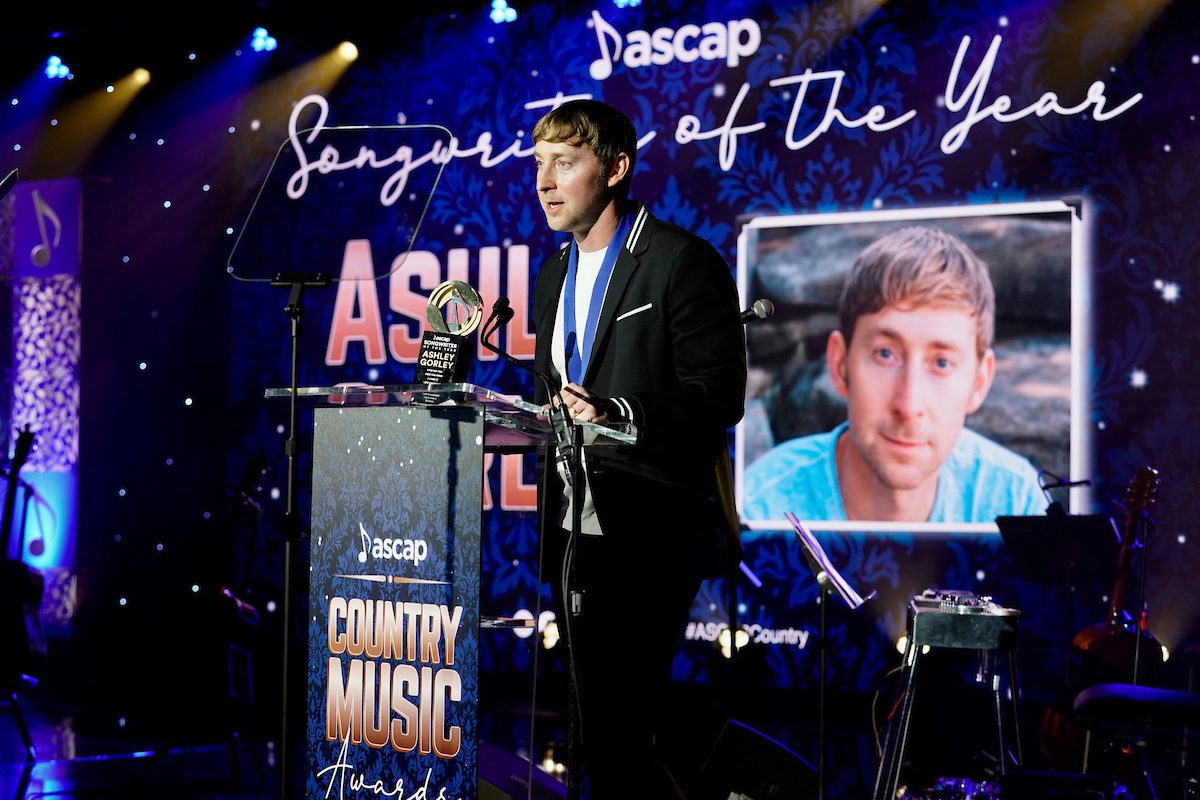 Ashley Gorley is honored with his seventh ASCAP Songwriter of the Year award. Photo: Ed Rode

This year’s ASCAP Awards gala on Monday eve (Nov. 11) was packed with stars and superstars, but the best story of the night belonged to an unknown. 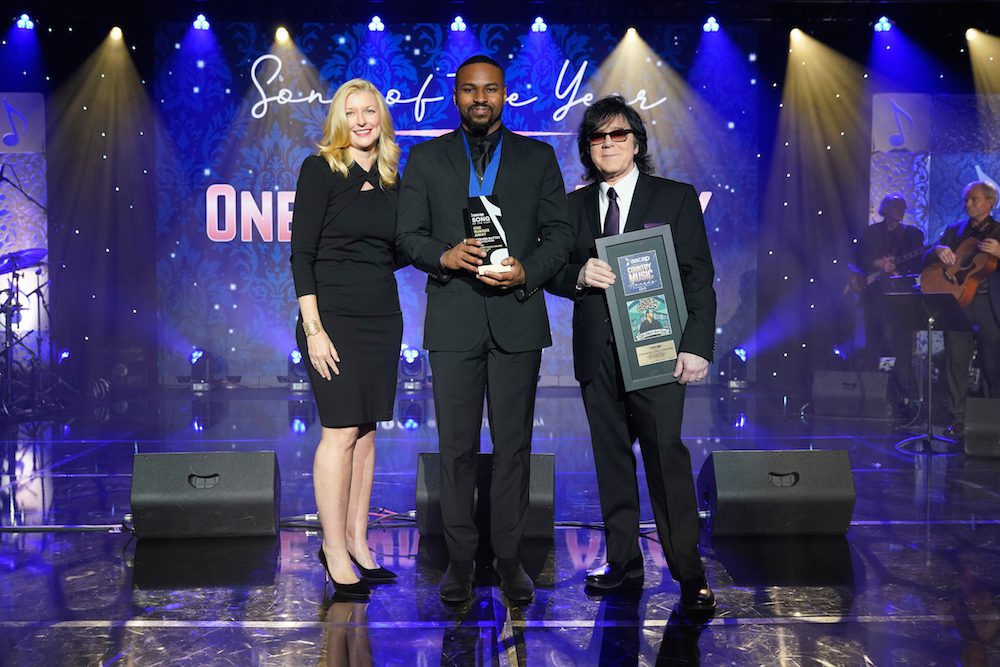 But the evening’s crowning moment was the presentation of its Song of the Year to Steven Battey for penning the Luke Combs smash “One Number Away.”

Battey is a Georgia native who lost his parents when he was a teen. He went to L.A., where he was an impoverished busking street performer. He worked his way up to becoming an in-demand pop and hip-hop writer. Then he chucked it all to move to Music City to write country music. “One Number Away” is his first country hit and his first ASCAP awarded song.

“This is surreal right now,” he said when he was handed the Song of the Year trophy. “I lost my parents when I was 18, 19 years old. I went to L.A. to sing on the streets.

“This is ‘One to Remember.’ This is a testament that anything is possible.” Adding to the accomplishment is the fact that he is self-published, rather than being affiliated with a big song firm.

ASCAP’s Publisher of the Year was Warner Chappell. “I really want to say thank-you to this entire team,” said Ben Vaughn in accepting. “What we’re most thankful for is being in this room with all of you tonight. We all know that we are fortunate and blessed to do this together. Hug a publisher. Let’s enjoy this success together.”

This is the seventh consecutive win for Warner Chappell at the annual ASCAP country banquet, and seven seemed to be the evening’s lucky number.

Winning his seventh ASCAP Songwriter of the Year award was Ashley Gorley. Seven songs earned him the honor this year – “Life Changes,” “Eyes on You,” “Love Ain’t,” “What Makes You Country,” “I Lived It,” “Rumor” and “Hide the Wine.” Ashley and cowriters Jon Nite and Dierks Bentley performed “Living” together, each taking a verse.

“It’s an epic night, so amazing,” said a grateful Gorley. “It all comes back to God’s gift of songwriting. I do not ever take that for granted. I thank God for creating the songs and for creating the people I get to write them with.” 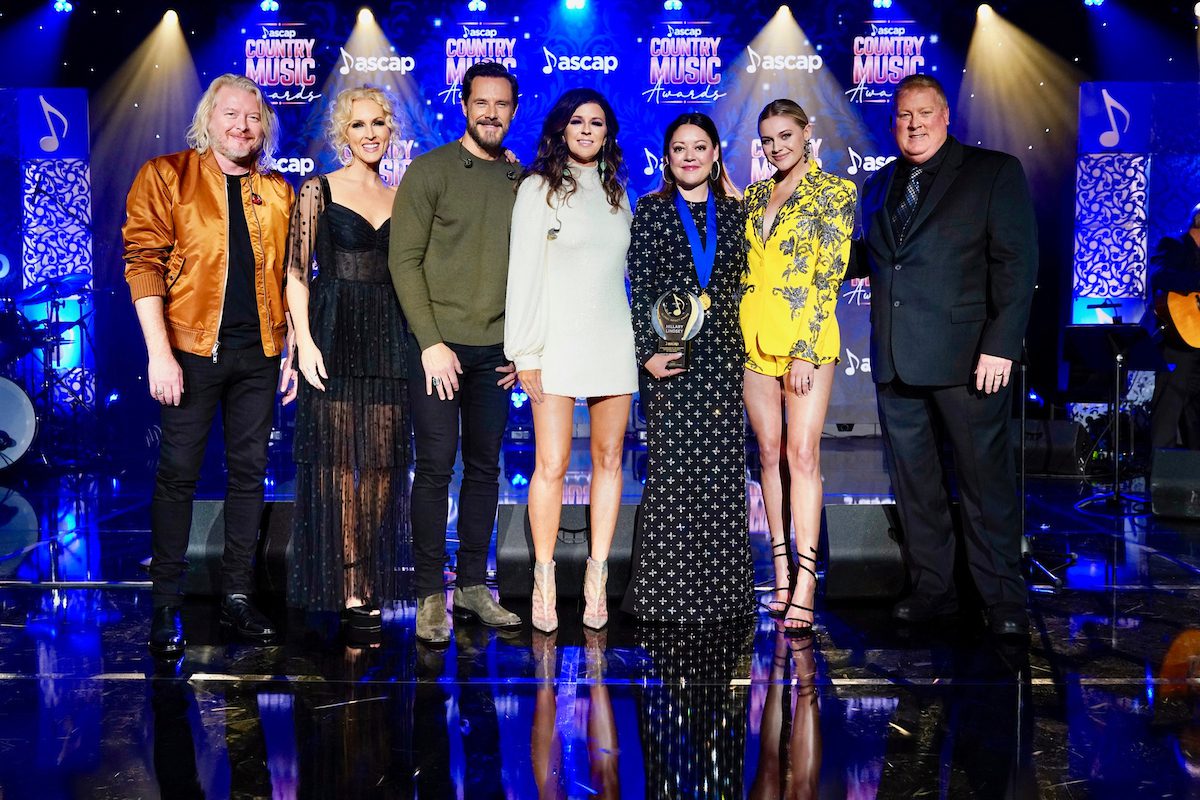 Trevor Rosen and Matthew Ramsey were named ASCAP’s country Songwriter-Artists of the Year. They write songs for others as well as for their band, Old Dominion.

“Songwriting is like magic to me,” said Trevor. “It still fascinates me every day.”

“This room is full of people who helped me and Trevor get to where we are,” added Matthew. “In this room, with this talent, I am intimidated. But I am also inspired to be better. Thank you all for supporting us as a band and for not letting go of us as writers.”

The show began with an expertly curated video montage of winning songs. Then Dan + Shay appeared to sing “Tequila” with Dan Smyers’ cowriter Jordan Reynolds. The trio’s harmonies and string-quartet backing made the performance sound even better than the hit record. The finale, sustained, high-tenor note by Shay Mooney sure didn’t hurt. 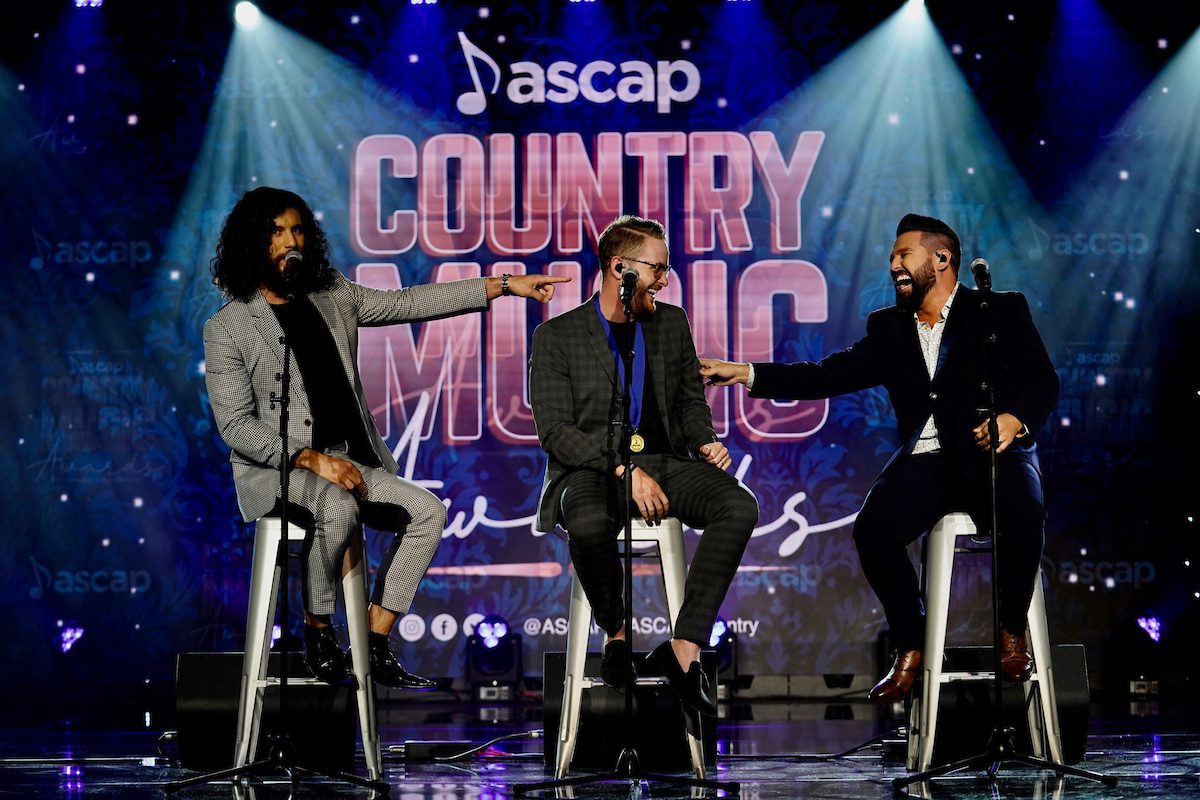 Elizabeth Matthews and Paul Williams greeted the crowd of nearly 800, giving a shout-out to military personnel, since this was Veteran’s Day. They also noted the passing of veteran ASCAP exec Ralph Murphy.

John Titta and Mike Sistad congratulated Sharon Vaughn and Rivers Rutherford on their inductions into the Nashville Songwriters Hall of Fame.

Hillary Lindsey, who is a goddess, was presented with the ASCAP Global Impact Award by Ballerini. The honor is in recognition of Hillary’s work with/for Lady Gaga, Florida Georgia Line, Taylor Swift and others. Little Big Town sang “Girl Crush” to salute her.

“I feel like we all came from somewhere far away from this town. But we all had a massive, massive love for music….And thank God for the gift of music.” 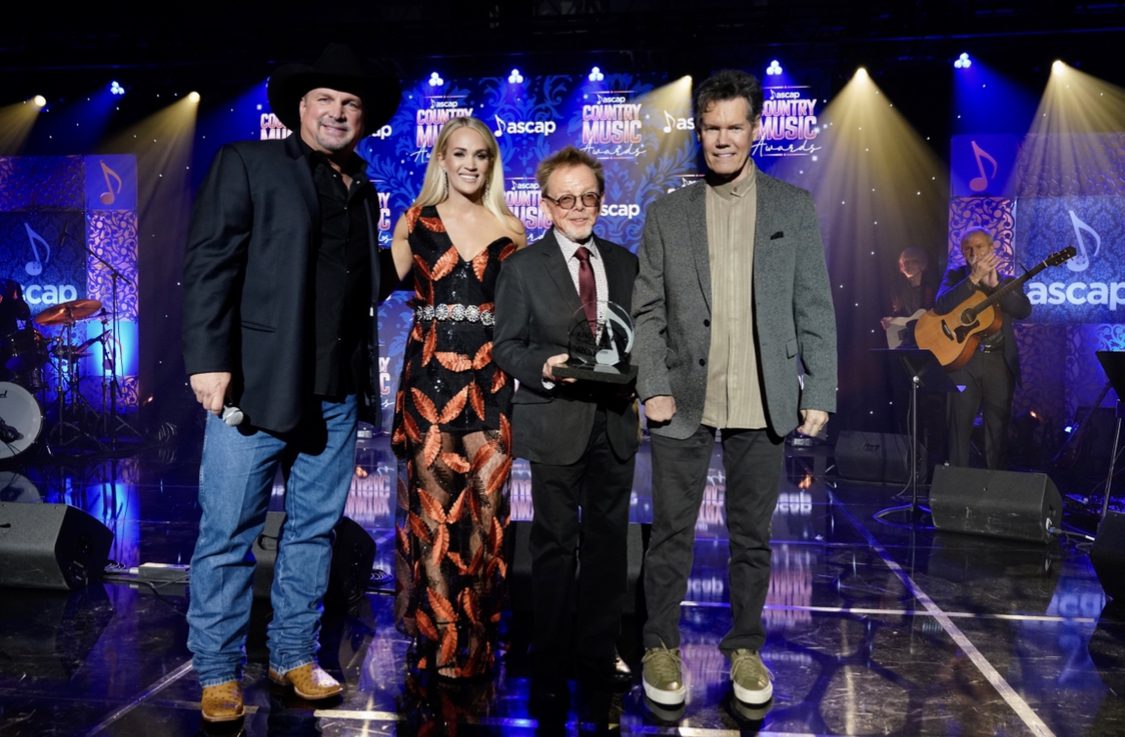 The Founder’s Award was presented to Randy Travis. In his honor, Carrie Underwood sang “Promises,” and Garth Brooks performed “Forever and Ever Amen.”

“This man saved country music!” exclaimed Garth. “I wouldn’t be standing here if it weren’t for Randy Travis.”

“Your music became a symphony to the lives of millions,” Mary Davis Travis said to her husband. “The songs that you left us before your stroke six-and-a-half years ago will remain the soundtrack of our lives Forever and Ever, Amen.”

ASCAP’s Vanguard Award was presented to Brothers Osborne by Ted Danson & Mary Steenburgen, who referred to Nashville as “our adopted city.”

“From the time I was a little boy, I always had a hard time believing in myself,” said charismatic front man T.J. Osborne. “Even after achieving everything, I still question myself daily….But I would like to thank ASCAP, because having this in my house will help.” 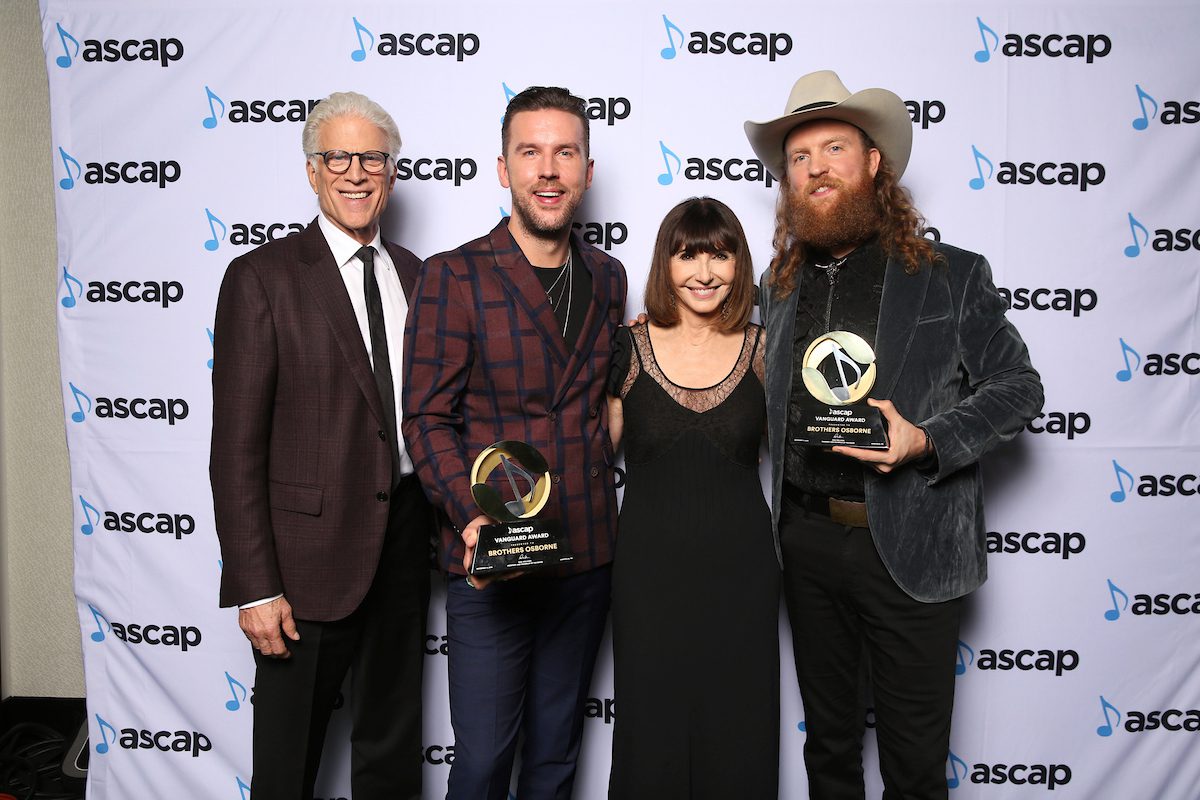 “How in the hell am I getting a songwriting award with such a horrible vocabulary?” quipped guitar slinger John Osborne. He said that he had to look the word “vanguard” up. “We’re just being ourselves. To all of you new songwriters in the room, this is your award, too. Just keep f—king going.”

Steven Battey’s performance of “One Number Away” served as the gala’s finale. He was rewarded with one of the evening’s many standing ovations.

The Sisterhood Band’s Alyssa Bonagura and Ruby Stewart were resplendent in cowgirl chapeaux. Alyssa and I noted that we were sporting complimentary bolo ties. Cassadee Pope chose a coral-hued ensemble featuring a bra with matching mini and flouncy jacket. 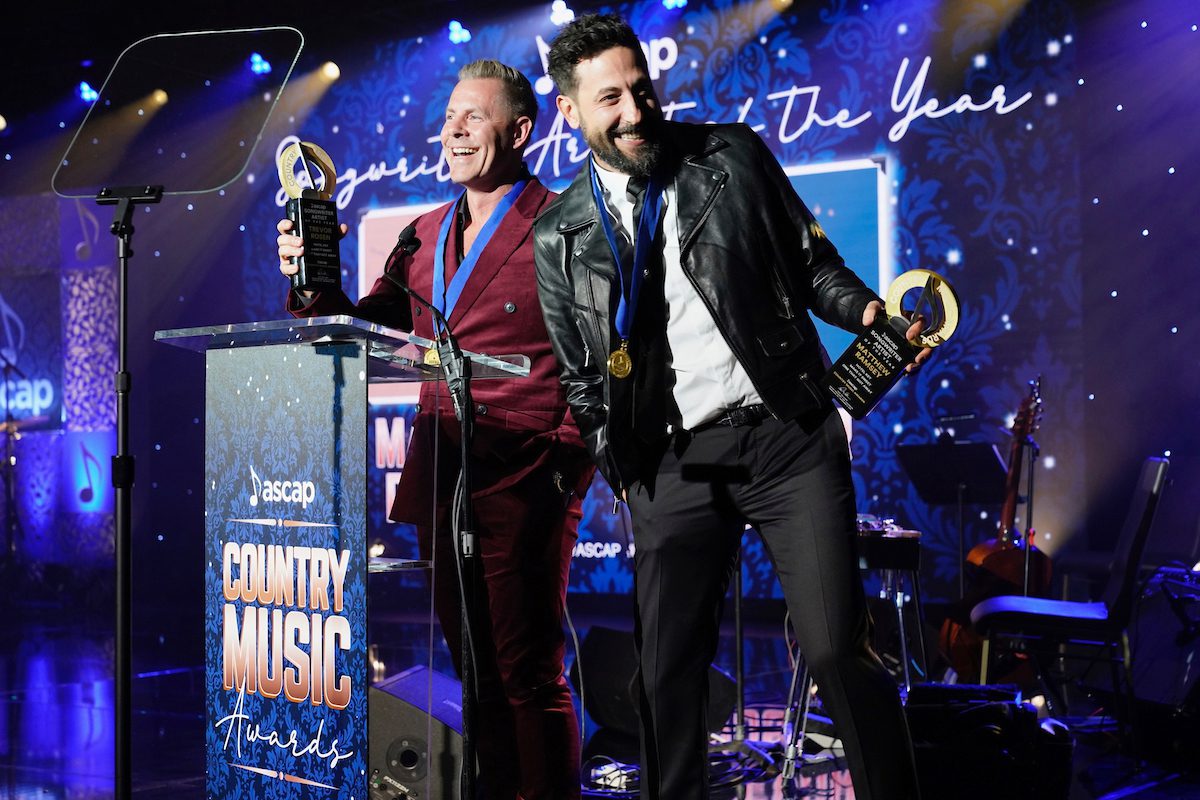 The setting was the ballroom of the Renaissance Hotel. Round banquet tables were elegantly draped in black with white rose and blue hydrangea centerpieces. The massive stage was splashed with gold and pale blue spotlights. The video display work on the backdrop was outstanding throughout the night.

By the time we exited, the temperature had plunged and rain had turned to sleeting snow. But that couldn’t dampen the music in our memories. 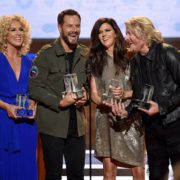 In Pictures: 10th Annual ACM Honors At The Ryman 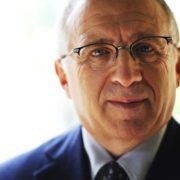 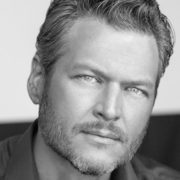 DISClaimer: Blake Shelton Has A Way With Hit Songs 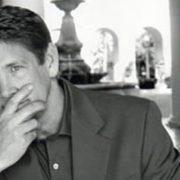