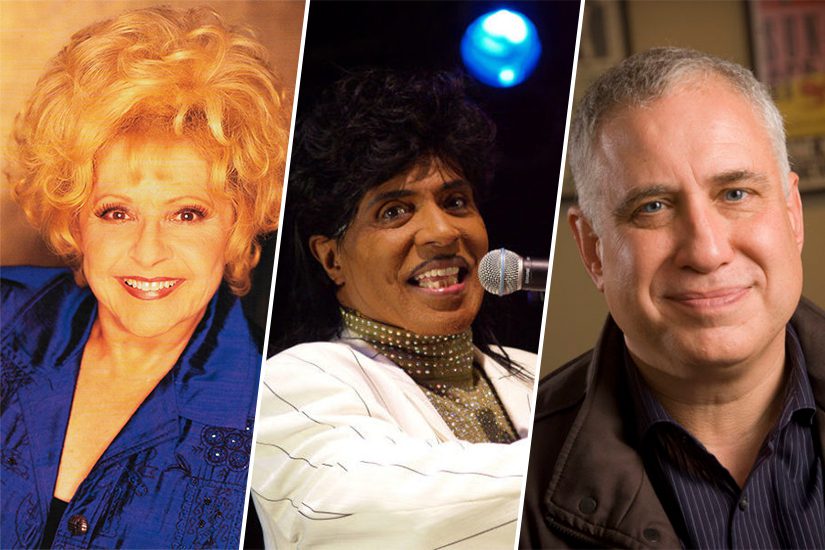 The Tennessee Governor’s Arts Awards are the highest honors this state gives to artists. Music, our signature export, was rightfully front and center this year.

The celebration began with a hot medley of Little Richard hits by the Jimmy Church Band – “Good Golly Miss Molly,” “Lucille,” “Jenny Jenny,” “Long Tall Sally,” “Keep a Knockin,’” “The Girl Can’t Help It”, “Rip It Up,” and “Tutti Frutti.” Richard Penniman, the full name of the inaugural Rock N Roll Hall of Fame inductee, has been a Tennessee resident for more than 15 years. Before that, he was a resident on and fixture of Jefferson Street in the 1950s.

“Jimi Hendrix was in my band in Nashville [at the Club Baron],” the 86-year-old rock legend recalled. “[Growing up in Georgia,] I listened to [Nashville’s] WLAC all night.

“This shows you how far God brings you….God bless you all.”

Birchfield is the washtub bass player and spokesperson for the East Tennessee string band The Roan Mountain Hilltoppers.

“It has always been an honor and a privilege to represent the music of East Tennessee,” said the Appalachian musician. “It’s been an honor to travel for the state of Tennessee.”

Her old-time country band played, with Janice emceeing and grooving on her homemade bass. The musicians were joined by champion flat-foot cloggers, to the crowd’s delight. Among those mentored by the band are the current Opry stars Old Crow Medicine Show.

Capps not only co-founded Bonnaroo, he was the entrepreneur behind the widely respected Knoxville nightclub Ella Guru’s, the promoter who puts on that city’s annual Big Ears Festival and the owner of Knoxville’s downtown theaters The Bijou and The Tennessee.

“I’m in awe to be here tonight in this extraordinary company,” he said. “It makes me really proud to be a Tennessean.”

Like Capps, the Country Music Hall of Fame was honored in the “Arts Leadership Award” category. The museum’s Kyle Young accepted the accolade.

“Thanks so much for this treasured recognition,” he said. “Country music has not always been treated as a cultural asset. It has not been a particularly easy road. This award is heartening because it offers joyful endorsement of the music that built this town. This art matters. We sustain the music that sustains us.”

The others lauded in the “Arts Leadership” awards category were Linda Caldwell, the founding director of the Tennessee Overhill Heritage Association in East Tennessee and former Tennessee Arts Commission executive director Rich Boyd, a Nashvillian.

Mandy Barnett performed three tunes in honor of Brenda Lee – “I’m Sorry,” “Sweet Nothin’s” and “All Alone Am I” – with the piano accompaniment of Chris Walters.

“Mandy, thank you, what a singer you are,” said Brenda. “It’s been a wonderful, wonderful journey. All of you recipients, you are so precious. I’m just so proud to be here. God bless you. God love you. And, as I always say, ‘Keep on rockin.’”

“What an inspired evening this night was,” said Gov. Bill Lee. “I know a lot more about why Tennessee is such a marvelous place to live than I did two hours ago. “You are part of a legacy that will impact future generations. We are so proud to be part of this event. We honor each one of you tonight.”

As we entered, we were serenaded by the charming, acoustic, brother-sister duo Giri & Uma Peters. During the program, Austin & Courtney Derryberry performed lively string band sounds in between presentations. John Seigenthaler hosted.

Many h’ors d’oeuvres were snacked upon – cheeses on crackers, grapes, cured meats, shrimp, mini-biscuits, etc. However, the Tennessean Executive Residence Conservation Hall ran out of plates.