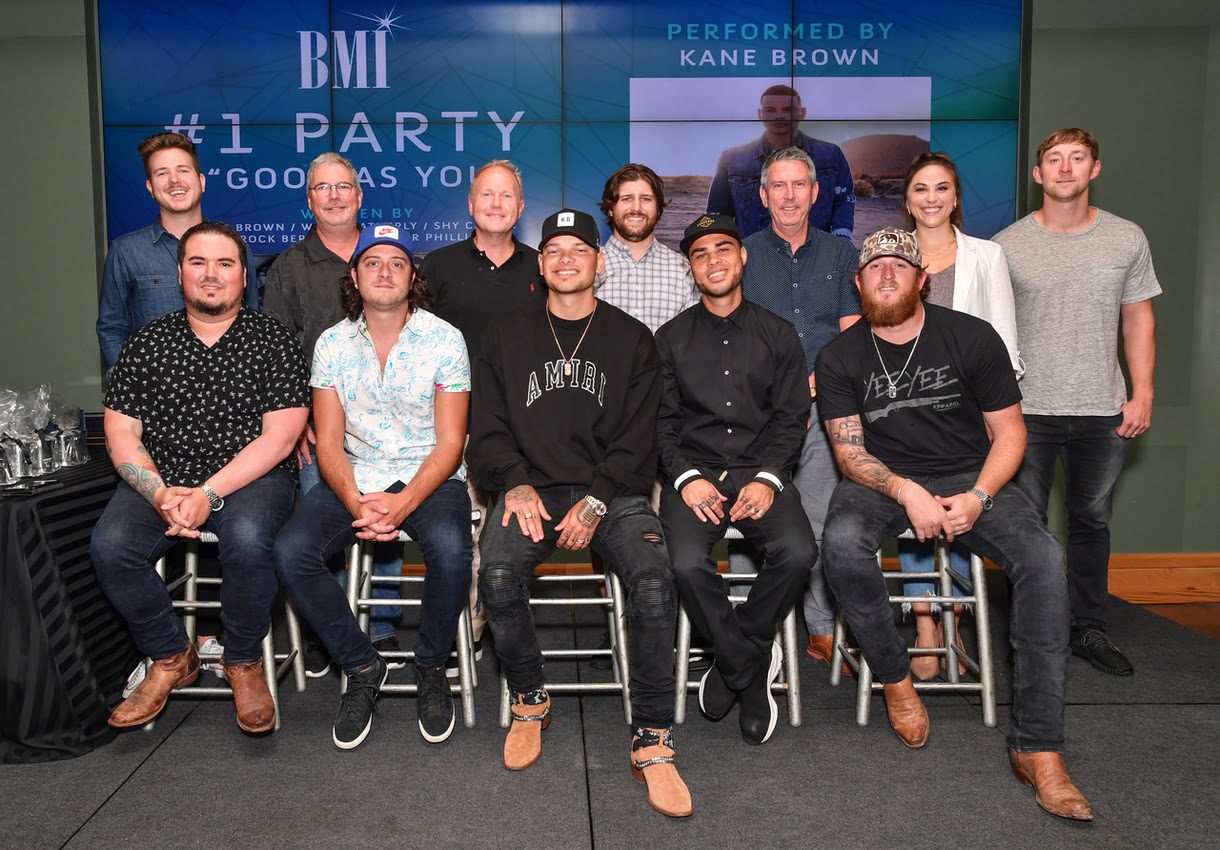 Co-writers for the Kane Brown No. 1, “Good As You,” came together at the BMI office on Music Row to celebrate the hit on Monday (Aug. 20). The romantic tune was the second No. 1 for Will Weatherly and Taylor Phillips, and the first No. 1 for Brock Berryhill. It was Brown’s third No. 1 as a writer, as his fourth as an artist. “Good As You” was one of many of Shy Carter‘s No. 1 hits in a plethora of genres.

BMI’s Josh Tomlinson served as MC for the gathering for the 100% BMI song. “To all of you guys, BMI is so proud of to represent all of you. We always love getting to celebrate with these parties, but when it’s all in the family it’s even more fun. I’m proud to get to talk about all of you.”

Tomlinson sent a message from the absent Dann Huff that the producer was proud to be a part of Kane’s record.

David Smith gave Pinnacle Bank’s presentation. “This one’s extremely special for us because two and half years ago, I hired a girl named Sara Berryhill, who would tell me about her husband that wrote music. We’ve been cheering you on ever since, buddy, we’re so proud,” Smith said to Brock Berryhill. Pinnacle Bank made a donation to the Boys & Girls Club on behalf of the songwriters.

Sr. VP of Promotions at RCA Nashville, Dennis Reese, thanked his promotion team that drove the song up the charts. He also spoke highly of Kane’s influence on country radio.

BMG’s Chris Oglesby stepped on stage to talk about the ever-charismatic Shy Carter. “The day this was written, Shy flew to St. Louis to perform a gig. Woke up at 6 o’clock the next morning, drove two hours with some dude he never met before in his life to Springfield, Illinois to get on a bus to write with you guys. Thanks for having him on there.”

Oglesby also made sure to recognize the radio promotion team at RCA Nashville. “What you guys do every day is the lifeblood of the music publisher,” Oglesby said. “Martha, the other thing that we need are opportunities. You have given us multiple opportunities, for that we are forever grateful,” he said to Kane’s manager, Martha Earls.

Warner Chappell’s Will Overton stepped up to the mic to speak about Weatherly, Berryhill and Phillips. “If you don’t know Taylor now, I know you will soon. He will find you and find a way to meet you,” Overton joked. “Taylor is the ultimate hustler.

“Two things stood out to me when I met Brock,” Overton continued. “He wasn’t just a hard worker, he was a grinder. Brock’s day starts at 7 a.m. and ends at 4 a.m. the next morning. Also, Brock really cares about his family, his friends, his co-writers, his publishers.”

Warner Chappell presented plaques after the ceremony, as well as whiskey decanters.

Newly appointed Chairman/CEO of UMPG Nashville, Troy Tomlinson, gave his first No. 1 presentation as the leader of the UMPG Nashville team. He spoke very eloquently about the importance of the song, beginning with a Tom T. Hall quote. “I didn’t have this written down but I was standing there watching all this and I thought of this quote from Tom T. Hall,” Tomlinson said. “He said, ‘Every generation of songwriters needs to write for their generation and everything will work out okay.’ And I think that is what is on display here right now, a whole new generation of songwriters.

Tomlinson thanked Dann Huff for his production, Sony Music Nashville’s Randy Goodman and Jim Catino for their passion, the RCA Nashville promotion staff for their hard work, BMI for hosting the party, and Warner Chappell for the whiskey decanters that he hoped to be included on.

“Martha, what you have done and what you and Kane have done together is enviable. Some managers work their entire careers and never have the type of relationship that you two do, one that’s built on trust and respect. To both of you, congratulations,” Tomlinson said.

UMPG made a donation to MusiCares in honor of “Good As You.” 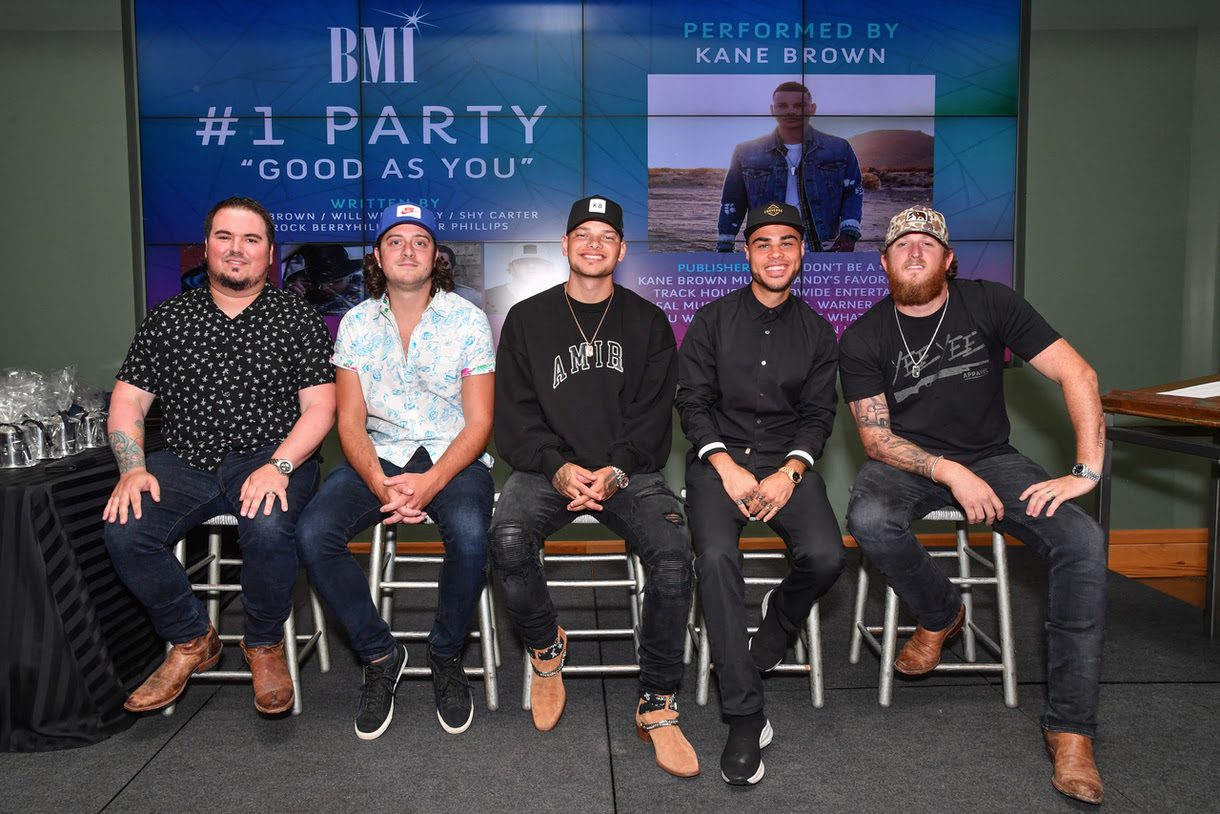 “I want to thank Kane, first of all,” Weatherly said when he stepped up to the mic. “I would not have two No. 1’s without him. I really appreciate what you’ve done for me. You’ve changed my life.”

“Kent, I remember at the ‘Heaven’ No. 1 party, you were talking about booking Shy on the bus. All of this happened because of a small moment like that, I appreciate that. You’ve been very good to me, and I appreciate that,” Weatherly said.

“This is the proud one for me. To have one with two of my best friends,” Phillips said to Kane and Berryhill. Berryhill and Phillips met at an album release party, and Phillips reported that they had written nearly 200 songs since their meeting a year and a half ago.

“Thank you for the friendship, thank you to the boys for writing a song with me, thanks to the wives and girlfriends that gave us the inspiration, Katelyn—for Kane wanting to be as good as you, that song would never have happened without you, my family, my friends, my co-writers, love all y’all,” Phillips concluded.

“This is my first one so I had to write some stuff down,” Berryhill said. “Kane, I’ve already texted you and told you all this, but you have changed our lives. Thank you, brother. These guys up here are four of the most talented dudes I know.

“My beautiful wife for moving here with me,” Berryhill continued. “We’ve been doing this for almost 10 years. I love you.”

Berryhill echoed the thanks of the management team, label, and publishers.

Carter brought his beautiful children up to the stage. He then lead the party goers in singing the chorus of “Good As You.”

“I want to thank Oglesby and Kos for having that dude come pick me up,” Carter joked. “He had a nice car.

“Kane, you know you’re my boy. Since the beginning, we’ve been holding this shit down!” Carter said. He had the crowd in stitches. Carter’s adorable daughter then dropped the mic for him.

“The plan was to take the mic before you got it,” Kane joked.

“I just want to thank these guys,” he said. “They’re my boys. Shoutout to my managers, Martha, Shawn, Nikki, my beautiful wife—I love you so much, everybody over at Sony, Kent Earls—I love you to death.

“Thank y’all for coming, let’s get another one,” Kane concluded.