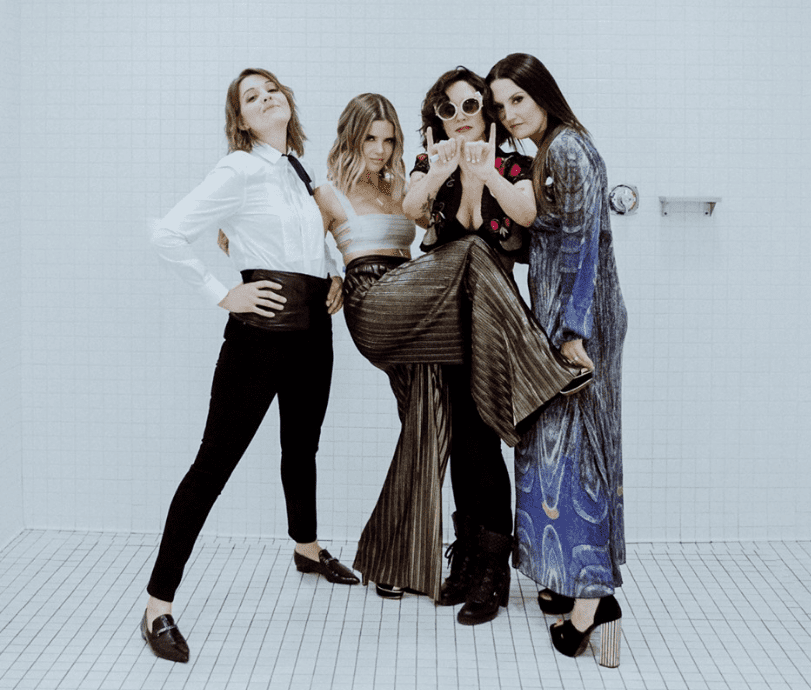 “This project represents four bad-ass women who cannot be contained,” said their producer, Dave Cobb, to a packed Ford Theater audience at the Country Music Hall of Fame. We gathered there for a listening event on Monday evening. The women received standing ovations throughout the gig.

“The themes of this record are around female empowerment,” said Brandi Carlile.

“I’m just really proud to be part of a collective,” said Maren. “We have the utmost respect for one another. When we win, we all win. None of us need this – we all have our own things going on.”

The collaboration originated with Amanda, who approached Brandi about forming a group. Brandi invited Maren. Then they asked Natalie for songs. Natalie’s voice on her demos made the other three believe that she would fit in their group perfectly.

“I worship the honky-tonks they walk on,” commented Natalie.

The record’s title tune is a rewrite of the Jimmy Webb classic that named the original group. This time, the ghost characters are a woman who fled violent Honduras, a healer who was convicted of witchcraft, a Freedom Rider who gave her life to the Civil Rights movement and a female preacher accused of heresy.

The other tracks are quite diverse. “Only Child” is a motherhood ode. “Loose Change,” “Crowded Table” and “Redesigning Women” (the first single) have feminist angles. “If She Ever Leaves Me (It Won’t Be for You)” is a witty lesbian country song. “Old Soul” has folkie introspection.

“My Name Can’t Be Mama Today,” “Don’t Call Me” and “Heaven Is a Honky Tonk” are delightful hillbilly romps. Their version of “The Wheels of Laredo,” which is Tanya Tucker’s new single, brings the song’s country poetry to the fore.

“There are a lot of amazing women on this project,” said Maren, mentioning the studio participation of Sheryl Crow and Yola. Song collaborators include Laura Veltz, Lori McKenna and Miranda Lambert.

“This is for all women,” commented Natalie about this historic project.

I hadn’t initially planned to write about this event. But not only was the music outstanding, every fabulon and her sister was there. How could Bobby Karl help himself?

The Highwomen is the latest manifestation of a growing trend. The embattled women of country music have been banding together in mutually supportive ensembles.