“We don’t want to make a perfunctory, check-the-box pass at this,” Curtis said during that meeting. “Doing so would be an insult to everyone in this room tonight. It has to be done thoughtfully, intelligently. We have to recruit informed industry leaders who also participate in sessions during CRS (Country Radio Seminar) to contribute, too, so that any discussion we have ends up being productive.”

On Thursday, May 23, Curtis hosted the inaugural CRS360 webinar, the first in a series that aims to deepen discussions around hot button topics pertaining to country radio, the first of those being the lack of female artists heard on country radio.

Green offered several data sets, tracking country radio chart data over the past 45 years (1974-2018). He summarized the findings from looking at a nearly half-century worth of country radio data with three key points, including: 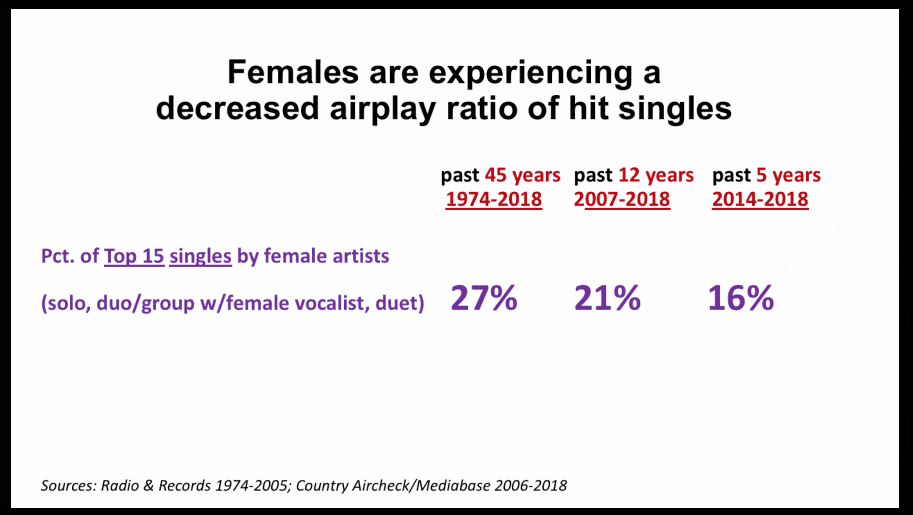 2018 marked a new low in the number of female artists notching Top 15 singles, with 12.2 percent. 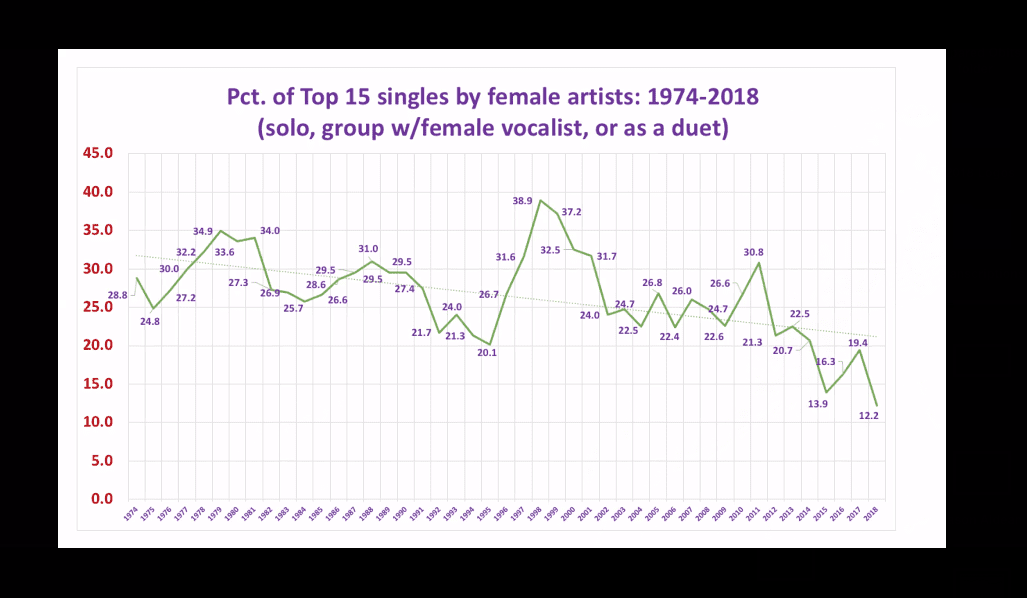 Shomby and Green also attempted to address the effects PPM have had on radio stations and artists, versus handwritten logs that are still often used.

“With PPM it’s about exposure rather than the listener,” Shomby said. “If you are in a grocery store and hear music over the radio, it picks that up, whereas a diary is what you recall listening to. I think that affects radio’s ratings.”

“When stations ratings depressed from 2007-2009, radio stations built a lot of pressure about the music and started focusing on hits,” Green said. “We can’t blame 100 percent of the blame on the people meter but as you saw the change in 2000s, that has had an effect. Female artists who were outnumbered to begin with were affected by PPM.”

“It means fewer slots for new adds each week,” Green said. “And with so many consistently active male artists, it makes it harder for female talent.”

The study also noted that Top 15 singles from female artists is down nearly 50% from 2011-2018. Several top female artists such as Martina McBride and Reba have not had hits since at least 2016, and though there are many female newcomers to the genre, most have not yet scored a Top 15 hit.

Later in the session, Shomby also offered an overview of the factors radio station programmers look at in determining songs to add to their stations, which included research (questionnaires, consumption, and national research reports), chart position, artist popularity, overall sound of the music,

Skaggs’ data highlighted the differences between artists and songs who find success on country radio and those that are honored at various awards shows and critics panels, including the Grammy Awards, NSAI’s “Songs I Wish I’d Written” honors, and the Nashville Scene’s Country Music Critics Poll. The study showed that songs performed by women are 135 percent more likely to be nominated for the Grammy’s Country Song of the Year category, no more or less likely to be selected as a “Song I Wish I’d Written” honoree, and 76 percent less likely to appear on Billboard’s Year-End Hot Country Songs Chart. 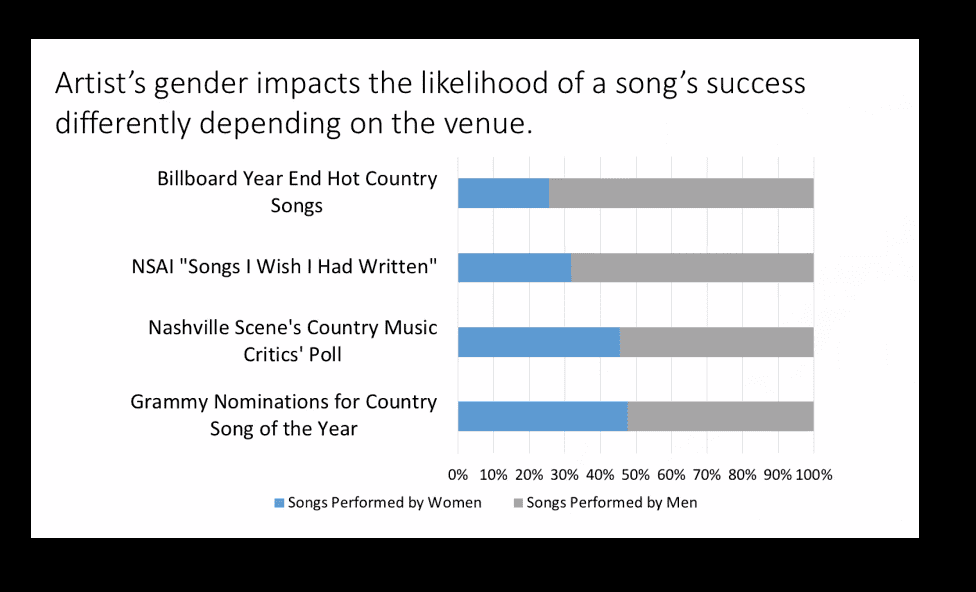 Shomby noted that much of the disconnect between the songs and artists that succeed on radio and those that win Grammys and other industry honors is due to the different audiences they reach.

“The Grammys are selected by industry folks—publishers, writers. It’s really not a listener-oriented situation, which is where that disconnect may come in,” Shomby said.

Curtis noted, “Historically, there is a disconnect between Grammy [winners] and what is played on country radio. Fifteen or sixteen years ago, the album [Livin’, Lovin’, Losin’: Songs of the Louvin Brothers] won the Grammy for Country Album of the Year, but had little sales and no radio hits at all.”

Shomby offered another example of the disconnect from earlier this year, when Kacey Musgraves took home several Grammy honors, including the evening’s top prize, Album of the Year, for her project Golden Hour. However, she has never had a No. 1 single at country radio.

“She is polarizing in this business at this point, but I don’t think there is a problem with Kacey, it’s that the Grammys are a different awards show. They are picked by people who aren’t listening to radio but are involved in music.”

The conversation surrounding the lack of female voices on country radio will continue with Part 2 on June 11 at 1 p.m. CT.