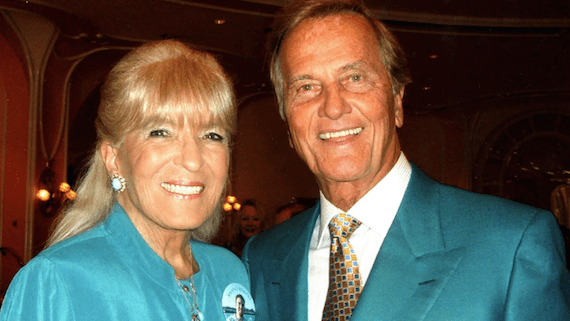 She is usually recalled as the wife of pop star Pat Boone, the daughter of Country Music Hall of Fame member Red Foley or as the mother of Grammy-winning hit maker Debby Boone. But she was a recording artist, herself. She was also an author, philanthropist and TV personality.

Shirley and her two younger sisters began appearing on their father’s radio and TV shows as children. In 1950, they recorded “Frosty the Snowman” and “Rudolph the Red Nosed Reindeer” with Red Foley, billed as “The Little Foleys.”

Shirley attended David Lipscomb High School, where the popular cheerleader was voted student-council secretary and Homecoming Queen. Her high-school sweetheart, Pat Boone, was a handsome boy-next-door, a student athlete and the star of the WSIX Nashville radio show “Youth on Parade.” They married in 1953, when both were 19 years old.

He won on TV’s Arthur Godfrey’s Talent Scouts the following year. This show was that era’s American Idol, so Boone launched a highly successful recording career.

Shirley and Pat released their first duet LP in 1959. Titled Side By Side, it featured them harmonizing on standards such as “Let Me Call You Sweetheart” and “My Happiness.”

I Love You Truly was issued as the couple’s second duets LP in 1962. Like its predecessor, it was comprised of familiar songs such as “Have I Told You Lately That I Love You,” “Blues Stay Away From Me” and “True Love.”

Debby became a solo star with hits such as “You Light Up My Life” (1977) and “Are You On the Road to Loving Me Again” (1980). She married minister Gabriel Ferrer, who is the son of Rosemary Clooney and Jose Ferrer and the cousin of George Clooney. Sister Cherry Boone wrote the 1982 book Starving for Affection and became spokesperson for eating disorders.

Mama Shirley Boone became an author, as well. One Woman’s Liberation (1972), The Honeymoon Is Over (1980) and her other works espoused conservative religious values. Both with her husband and solo, she appeared on many Christian-oriented TV talk shows.

She helped to establish Mercy Corps, which has become an international charitable organization dedicated to addressing economic, environmental, social and political problems. She was also a major benefactor of Pepperdine University.

After living in Tennessee, Texas, New York and New Jersey, Shirley, Pat and their four daughters moved to Beverly Hills, CA in 1960. She passed away there last Friday with her daughters singing hymns at her bedside.

She and Pat were married for 65 years. She is also survived by 16 grandchildren and 10 great-grandchildren.