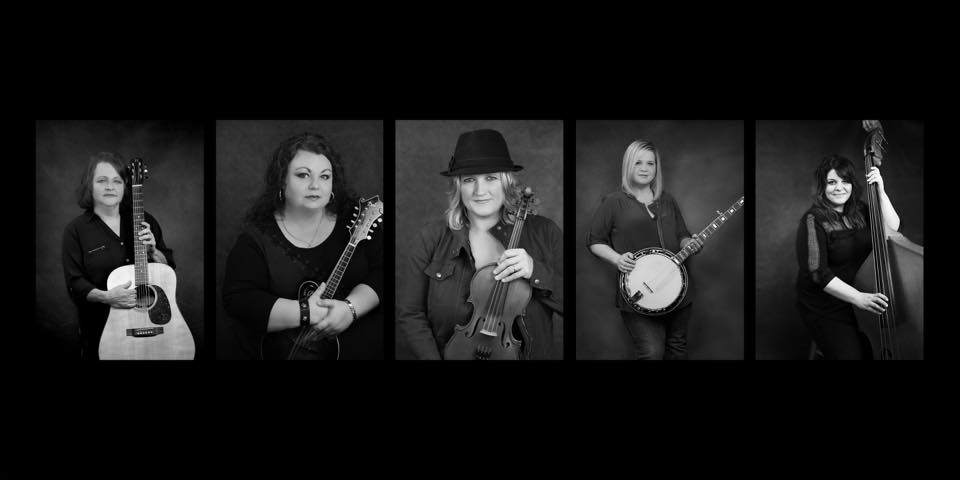 Let’s have a quick look today at what’s going on in the bluegrass world.

The stack of platters boasts two excellent live collections, one from Hot Rize and one from The Earls of Leicester. NewTown and Balsam Range have both returned with dandy sets.

The Disc of the Day award goes to the all-female group Sister Sadie, now marketing its second collection.

One of the most consistently enjoyable discs came from Appalachian Road Show, which earns it a DisCovery Award.

LORRAINE JORDAN & CAROLINA ROAD/True Grass
Writers: David Stewart; Producer: none listed; Publisher: none listed; Pinecastle (track)
– This has been sitting at No. 1 on the Bluegrass Unlimited chart for months. It is unadulterated ‘grass, stacked with high-lonesome harmonies and stately picking. The head-scratching premise of the song is that “Murder on Music Row” now extends to the bluegrass sound. You see, they’ve killed country music, and now they’re killing bluegrass, too. That’s news to me.

BALSAM RANGE/Get Me Gone
Writers: Walt Wilkins/Jim McBride/Jon Randall Stewart; Producer: Balsam Range; Publishers: Curb Congregation/Reynsong/Rightfield/Songs of Daniel/Tanasi Island/Wha Ya Say/Rezemblance, SESAC/BMI; Mountain Home
– Entering the bluegrass chart this month at No. 25 is this travelin’-man ditty. The lickety-split tempo and ultra cool song craftsmanship are the calling cards here. Balsam Range is the reigning IBMA Entertainer of the Year, and its new Aeonic CD is a clear demonstration why. The set, due on Jan. 4, also includes its proven hit, “The Girl Who Invented the Wheel” and a breakneck-speed cover of The Beatles’ “If I Needed Someone.”

NEWTOWN/Heart of Stone
Writer: Tyler Childers; Producer: Barry Bales; Publishers: Hickman Holler/BMI; Mountain HOme
-NewTown prides itself in painting a little outside the bluegrass lines. Drawing from the catalog of Americana/country sensation Tyler Childers for three of the tunes on its Old World CD is one illustration of this. The tart/sweet lead voice of fiddler Kati Penn takes us through the haunting melody of his hillbilly heartache lament about a wicked temptress. Highly listenable, as is the entire collection.

HOT RIZE/Wichita Lineman
Writer: Jimmy Webb: Producer: none listed; Publisher: Universal PolyGram International, ASCAP; Ten In Hand
– The band celebrated its 40th anniversary this year with a bash in Boulder that featured such celeb guests as Sam Bush, Stuart Duncan and Jerry Douglas. For a bluegrass group (heck, any group) to endure that long is practically unheard of. Even more impressive is the fact that Hot Rize still sounds so scintillating. This cover of the 1968 Glen Campbell classic is just one of many super moments on this outstanding, 26-track live recording. Amazing band. Enduring love from this longtime listener.

TELLICO/Courage For The Morning
Writers: Anya Hinkle; Producer: John Doyle; Publishers: none listed, BMI; Organic
– Released last month, this group’s Woven Waters CD leads off with this inspirational tune about perseverance and strength of character. Anya Hinkle’s slightly bluesy, behind-the-beat phrasing is quite ear catching. The dobro accents by the group’s Aaron Ballance are nifty, too. Don’t have a cow, but there’s an electric guitar in the mix.