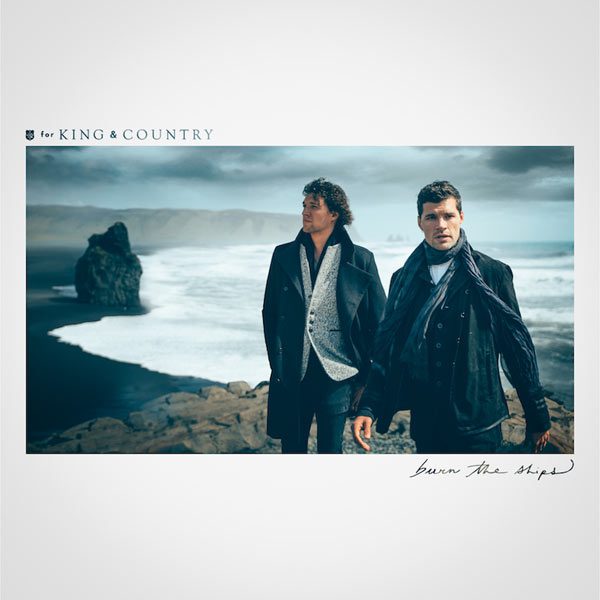 “This is a spiritual record, it’s a romantic record, a social record,” says Joel Smallbone, one-half of the celebrated sibling duo for KING & COUNTRY, who released their much-anticipated third album, Burn The Ships, on Friday (Oct. 5). The album’s release date also heralded the duo’s latest video, also for “Burn The Ships.”

The clip for “Burn The Ships” picks up where for KING & COUNTRY’s previous video, “Amen,” left off—with for KING & COUNTRY’s Joel and Luke Smallbone making their way through a vast desert, fighting the elements. They finally see their ship in the distance—engulfed in flames. “The ship is kind of the third character between Luke and I in this music video,” Joel says.

Fun fact: The ship featured in the video for “Burn The Ships” might be familiar to movie buffs—it is the Interceptor from the film series Pirates Of The Caribbean: The Curse of the Black Pearl.

Indeed, Burn The Ships tackles the challenges brought on by both life’s most seemingly hopeless moments, and its exhilarating victories. The album’s title track stems from an intensely personal experience for Luke and his wife Courtney, during her pregnancy with their second son Phoenix, now 3.

“She was dealing with morning sickness, so she went to the doctor and they gave her some anti-nausea pills,” Luke recalls. “They would work for a while, but then they would stop working and the doctors told her to take more. The doctors were all good with it, but before long I could see some behavioral changes. One night, we had a show in Austin, Texas, and she was back home in Nashville. She called me and said, ‘I need you to come home. I can’t stop taking these pills.’ She’s never asked me to come home of the road like that before.”

Without even a goodbye to his brother Joel and their band members, Luke left for the airport and a plane back to Nashville. “I called one of my other brothers and said, ‘Hey, go just be with Courtney until I get there.’ When I showed up I could tell she was frazzled. I said, ‘We can’t have this stuff anymore.’ She said, ‘Ok,’ but as the night went on she began saying things like ‘Maybe the doctors want me to slowly come off of it. Maybe I don’t need to completely stop it right away.’ I started to see that it was a real addiction.”

The couple decided to visit a psychiatric facility, where it was recommended that Courtney undergo nearly three weeks of outpatient therapy. Luke stayed off the road during that time, driving his wife to her sessions each day.

“She did great and she really healed well. But for her there was always this pull, this temptation for pills, and the feeling that it would make her better. So one day I was at home and she was like, ‘I have to go and physically flush these pills. I’m moving into a new day.’”

That phrase stuck with Luke even while in the writing room, working on the new album. When a similar phrase, “Burn The Ships,” came up during a writing session, Luke knew it was a correlation to his own recent story.

“The phrase came from an explorer entering a new land. Men wanted to stay in the familiarity of the ship, so the general called them to the land and gave them the call to burn the ships, so they couldn’t go back. When we were discussing that, I felt it perfectly described what we walked through. There is so much in our pasts that holds us back from our futures. Sometimes we have to burn the things in our pasts.”

The video for “Burn The Ships” is the fourth from the album. “At the beginning of the year, we thought we needed to start telling the stories of these songs, simultaneously to the release of the song, so people pair them together,” Joel says.

As two of seven children, brothers Joel and Luke Smallbone launched their music industry careers early—as roadies for their older sister, professionally known as Rebecca St. James, who became one of CCM’s premier artists in the late ‘90s. Having grown up around the industry, the brothers incorporated the influence of the visual medium from the beginning of their own career.

In 2012, they released their own debut album Crave, spearheaded by the breakthrough hits “The Proof Of Your Love” and “Busted Heart (Hold Onto Me).” The brothers portrayed prisoners in the video for “The Proof of Your Love” and have regularly personated various roles in their videos. Joel would also appear in movies including 2013’s The Book Of Esther, and would star in 2016’s Priceless, which focused on human trafficking.

The duo’s 2014 sophomore effort Run Wild. Live Free. Love Strong. earned the duo an RIAA Gold certification, as well as a Grammy the following year for Best Contemporary Christian Music Album (they also earned a second Grammy that year, for their work on LeCrae’s “Messengers”). The duo also has four GMA Dove Awards to their credit.

“Even between doing the last album [2014’s Run Wild. Live Free. Love Strong.], the rules of engagement have completely changed. Not only with streaming, but the way that visuals are integrated into everyone’s life. Content is king, but hopefully you create hopefully inspiring. I secretly hope we can do visuals for the whole record.”

Released in July, the video clip for the track “God Only Knows,” featured a young woman on the verge of suicide. The clip ends with the message “Love and Listen. We need each other,” along with the number of a suicide prevention hotline.

“Right around the time we were talking about making a video for this song, that week Anthony Bourdain and Kate Spade lost their lives to suicide,” Joel recalls.

The brothers regularly bring up the topic when they speak with high school and university students; just weeks ago, during a visit to Nashville’s Lipscomb University, the duo asked how many students in attendance had been affected directly or indirectly by suicide, and approximately half of the students indicated they had been impacted in some way by suicide.

Luke recalls a similar response from students at Nashville’s Belmont University during a recent visit. “ I did not expect that,” he said. “I just told everyone, ‘Look around. This is real.’ My hope is people don’t get stuck there, but that it’s a through road to a greater conversation about how we perceive ourselves and our worth.”

The first single from the album, “Joy,” also speaks to the day by day, often moment by moment struggle to sift through news, relationships, social media, and other daily influences to find the positive.

The initial concept for “Joy” came nearly a year and a half ago. Joel estimates the brothers went through more than 80 versions of the song before setting upon lyrics that properly expressed their message.

“I realized if I’m just scrolling through my phone, or watching the news, I feel sadder,” Luke comments. “I have to make decisions day in and day out, moment by moment, to choose joy.”

“We wrote and rewrote the verses and bridge,” Joel recalls. “We knew it was an important theme on this album and something to lead with. It is a deceptively serious song but it is equally a very joyous—no pun intended—kind of song. Someone said life is 90 percent attitude. Even in the face of whatever challenge it might be in someone’s life, we can very aggressively choose this other road. I think we are at a crossroads, where we can choose resentment and bitterness or to actually go, ‘There is more that unites us than divides us.’ Maybe we can come through it in a way we haven’t before because we are faced with such division.”

The album’s closer, “Pioneers,” features four voices—Luke and wife Courtney, as well as Joel and his wife Moriah.

“Courtney has sung on different songs before and Moriah did background vocals for a lot of this record,” Joel notes, “but never have we all four been part of a song together.”

The track eschews typical surface-level romantic fare in favor of paying tribute to both the highs and lows of a relationship.

“People love the first bit of love, which is oftentimes the most fragile, the most performance-based, and can be the most shallow version of love,” Joel muses. “With me being five years into marriage and Luke being eight years into his marriage, we just looked at this song idea like, ‘What if marriage is this great adventure?’ Any good adventure has its doomsday moments and its mountaintop experience. That’s all part of what makes up the synergy and chemistry that makes up a good marriage and a good adventure.”