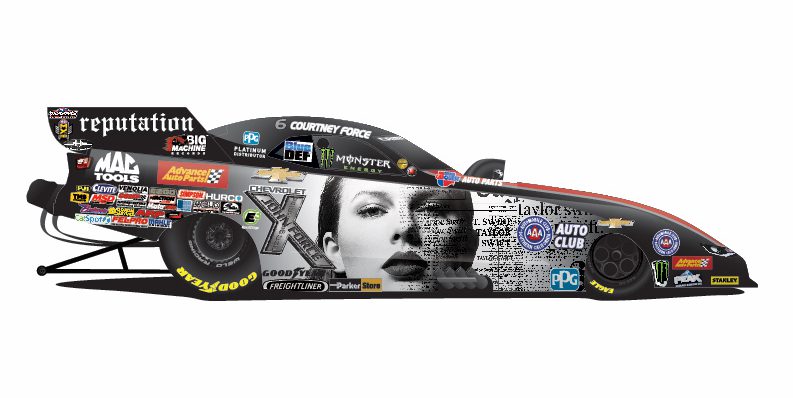 “Teaming up with fastest family in motorsports is a natural for Big Machine,” said BMLG President/CEO Scott Borchetta. “John Force is the biggest star the drag racing world has ever seen and daughters Brittany and Courtney are real racers and big stars in their own right. Our combined efforts to expose our music and spirits in the NHRA world while bringing more entertainment opportunities and exposure for John, Brittany and Courtney in our world is a true win-win. See you in Victory Lane.”

“It’s great to have Big Machine Records back on board with John Force Racing,” said CEO of John Force Racing and 16-time champion John Force. “We’ve done a lot of exciting things with them with that Taylor Swift car last season and my daughter Courtney Force going to the CMT Awards just a couple weeks ago. They were with my daughter Brittany Force when she won the 2017 championship last year. They’re a great partner with us and with Advance Auto Parts so we’re happy to have them back.”

Courtney commented, “Our Advance Auto Parts team and everyone at JFR is so excited to welcome back Big Machine Records to the team. We’ve had such a great relationship with them and I had so much fun working with them on a specialty Taylor Swift reputation Funny Car that I got to race at Pomona last year. This season, they gave me the opportunity, with Advance Auto Parts, to be a presenter at the CMT Awards in Nashville. That was such an incredible experience and I love that, while working with Big Machine Records, it allows us the opportunity to cross over two different worlds of rock n’ roll & drag racing. We look forward to the future possibilities with them & hope to have them back in the winner’s circle with us many more times this season.”