On Wednesday (May 30), Christian rock band Third Day will embark on their farewell tour, after 25 years in the business. The band’s impetus came from Georgia high school buddies, vocalist/songwriter Mac Powell and guitarist Mark Lee.The band initially signed with Reunion Records and in 1996 released its self-titled debut album, a blend of southern rock grooves and inspirational lyrics, wielded by Powell’s blowtorch of a voice. The band would later align with Essential Records.

Along the way, the band’s Powell, Lee and drummer David Carr have earned four Grammy Awards, released 13 full-length studio albums (including 2017’s Revival, which was recorded in Muscle Shoals), and given music fans classics including “Come Together,” “Soul On Fire,” and “Call My Name.”

While many bands opt for longer, drawn out farewell treks, Third Day’s 20-date tour will launch tonight with two shows in Seattle, Washington, and wrap June 27 with a show at the iconic Red Rocks Amphitheater in Colorado.

“We just reached a point where we knew it was time,” Powell tells MusicRow. “I think we are ready to call it a day on Third Day, if you will. There was a lot going on in our personal lives as fathers, husbands and as individuals, I think we realized it was time to move on to different seasons in our lives. The hard thing about it is I don’t want to say we are breaking up, because we are not. It’s more just moving on. I don’t know the right terminology for that. I think saying farewell is the best way to say it.”

Joining them will be Matt Maher, with special appearances from Zach Williams, Crowder and We Are Messengers on certain dates.

“It just came down to who are our friends and who do we want to have in front of our fans to say goodbye with,” Powell says. “Matt Maher is at the very top of that list. He’s been on the road with us a few times and we love his writing and music and him as a person. Zach and I did several shows together last year and became fast friends with him. What those guys are doing fits well with Third Day.”

The farewell trek includes three nights at Nashville’s Ryman Auditorium, on June 18, 19 and 23.

“It’s going to be a big party in Nashville,” Powell says. “We have so many friends and people behind the scenes that work in management, business management, booking, label, all those people. It will be, in a way, a last chance to see them and say thank you to them. Nashville is always a unique town for us and we have a love for the town.”

So why would one of Christian music’s most successful bands choose to hold a farewell concert in a smaller, if historic, venue like the Ryman Auditorium, rather than some of Nashville’s larger venues?

“My wife asked the same thing,” Powell laughed. “We knew our fans would be great and support us but we had no idea to what extent. We wanted to plan it conservatively when it came to booking the tour with the number of shows and at the venues we were playing. We wanted to try to keep it intimate enough where people didn’t get lost in an arena. That’s why we chose a lot of these places like the Fox Theater in Atlanta. We could have chosen to go to the arena, but we wanted to keep it smaller. That’s why the Ryman fit so well.”

“When we started, we thought, ‘Man if we can just make a couple of records and tour a few times, that would be amazing.’” he says.

At the time of the interview, Powell said he and his Third Day cohorts were still configuring a set list to honor both the numerous chart-topping singles fans have come to expect, as well as personal favorites.

“I think every night will be different in some way. We have a big list of songs that make sense that are No. 1 radio hits, and then fan favorites that may have never been radio singles, and then songs we want to do as a band and as individuals. It’s going to be a long, great night of music.”

There is plenty of solo music in the works after the farewell tour wraps.

Lee has been in the studio working on new music with Third Day keyboard player Scotty Wilbanks. Meanwhile, Powell has been working simultaneously on two projects, including an upcoming Christmas album, as well as a project for Mac Powell and the Family Reunion. He has also been in the writing room with several collaborators, including Eric Paslay.

“I’ve got enough songs for a couple of records,” Powell says. “That’s part of the fun of this time of music we live in. Music can be released fairly quickly and as an independent I can release it when I want to. But we’re still working on the music.”

Powell says he can’t rule out future collaborations with his Third Day cohorts.

“Something might happen down the road. We are not ending because we hate each other or anything like that. I think it’s good terms we are on with each other. Because of that, there is always the chance of something in the future, and I hope that does happen.” 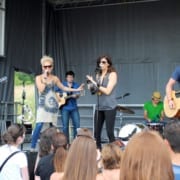