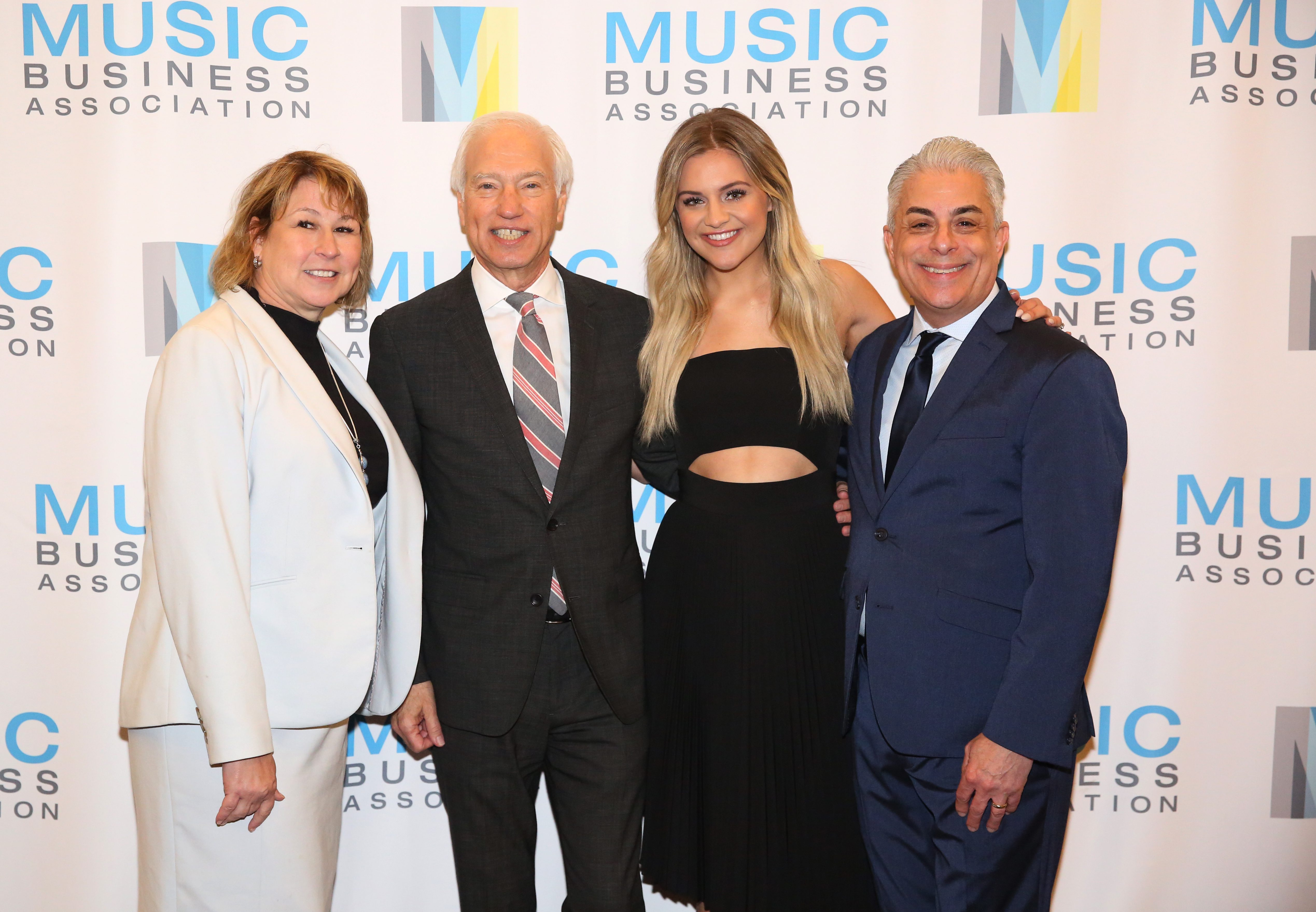 The 2018 Music Biz conference hosted two awards programs during its Nashville event, a breakfast on May 16, and a luncheon on May 17.

The breakfast honored the RIAA’s retiring Chairman/CEO Cary Sherman with the Presidential Award for Outstanding Executive Achievement. Sherman, who joined the RIAA in 1997, is credited with helping enact legislation that is the foundation of helping artists get paid for streaming music. 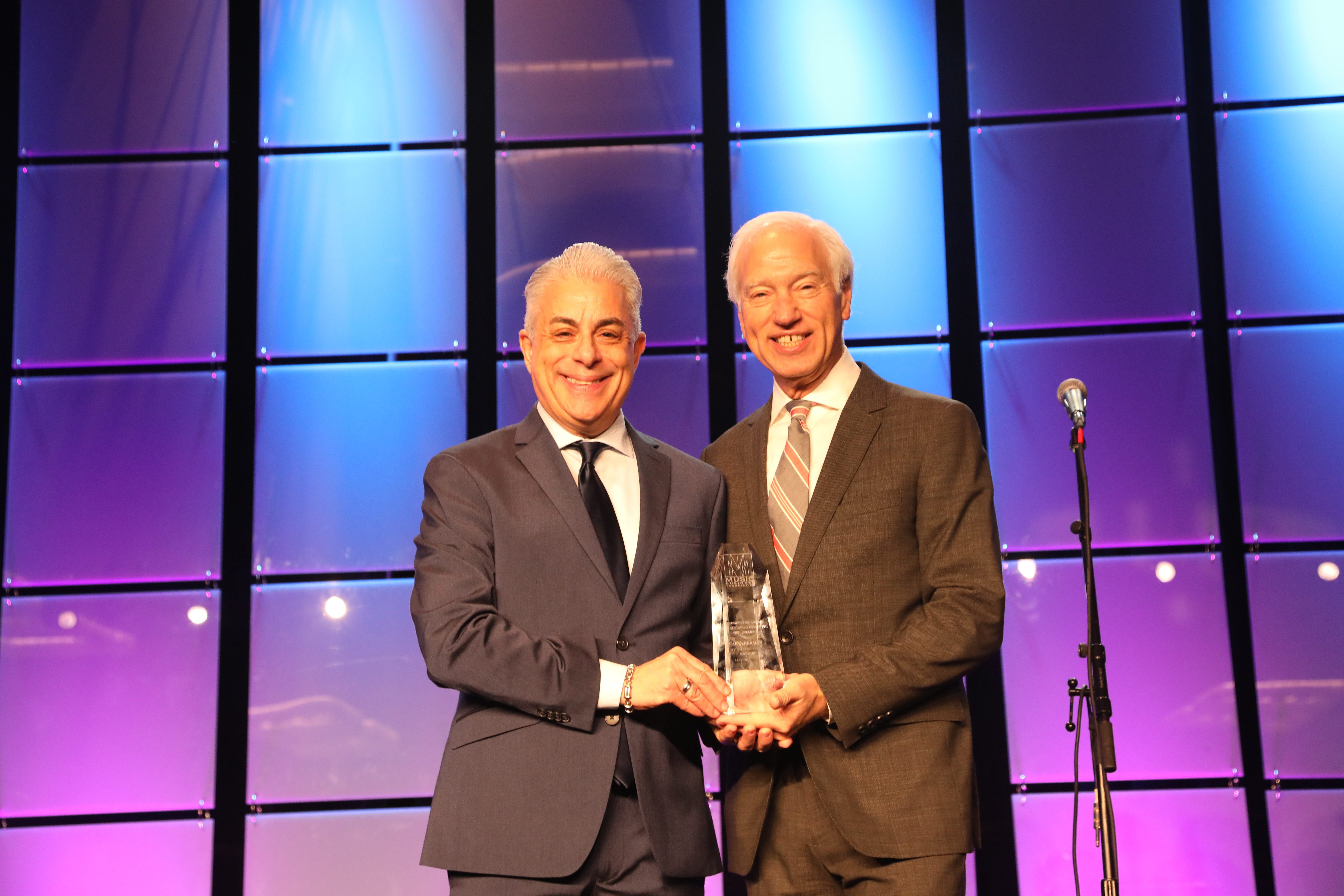 Sherman mentioned his RIAA successor, Mitch Glazier, “You made this transition easy, and even fun…This is the first time someone from the policy side of the business has [received this award] so that makes it really special,” said Sherman in heartfelt remarks before offering advice.

“You have to be ahead of the curve—identifying problems before anyone knows it’s going to become one. Fortunately we got ahead of the curve on streaming. Back in the 1980s we imagined the possibility that someday someone would figure out how to beam music into a home for listening. So RIAA started lobbying congress to extend our limited copyright for sound recording to cover digital transmissions of music. We got legislation in 1995 and again in 1998, establishing the right to negotiate marketplace deals and be paid for what is now online streaming, which produces the bulk of our revenues today.” 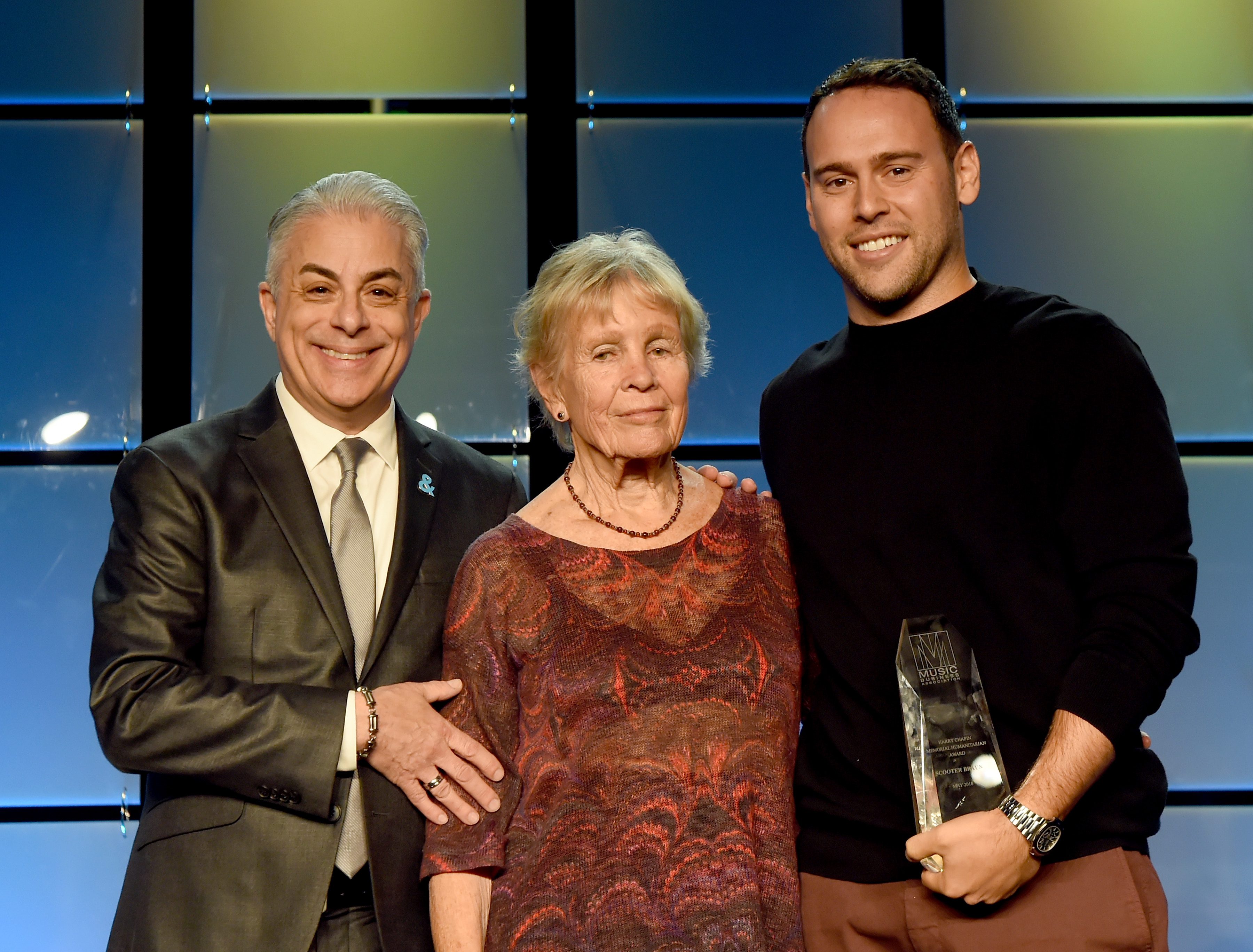 “One of these days I’m going to actually prepare a speech,” said Braun. “This award is really a testament to a lot of people that aren’t on this stage, first of all my mother. Every holiday she would take us to soup kitchens. My brother is the founder of Pencils of Promise. As my life went on, I think I became attracted to people like that, because I married someone who has dedicated their life to that. My wife is the founder of Fuck Cancer.

“At 36 years old I’ve had a very unique and lucky career. I’ve been to the top of a mountain I never thought I’d get to. And what I saw there was very different than what I expected. I thought being a part of Grammys, No. 1 records and tours would feel like success. I can tell you the greatest moments of my career has been hanging out with friends and family and being a part of just music.

“A year ago the terror attack happened in Manchester. I appreciate that One Love Manchester is a part of this [award], but I wish it was something we never had to do. Unfortunately, my belief is this won’t be the last time we see something like this—we’ve seen Vegas happen. That evil is going to continue to exist, and we as an industry have a responsibility of those we lost. I met over 20 families where someone is not ever coming home. For the rest of my life I will carry them with me, and I know Ariana [Grande] will…She is exactly the role model we want her to be, and I couldn’t be more proud of her. I share this award with her…and any unsung hero out there.” 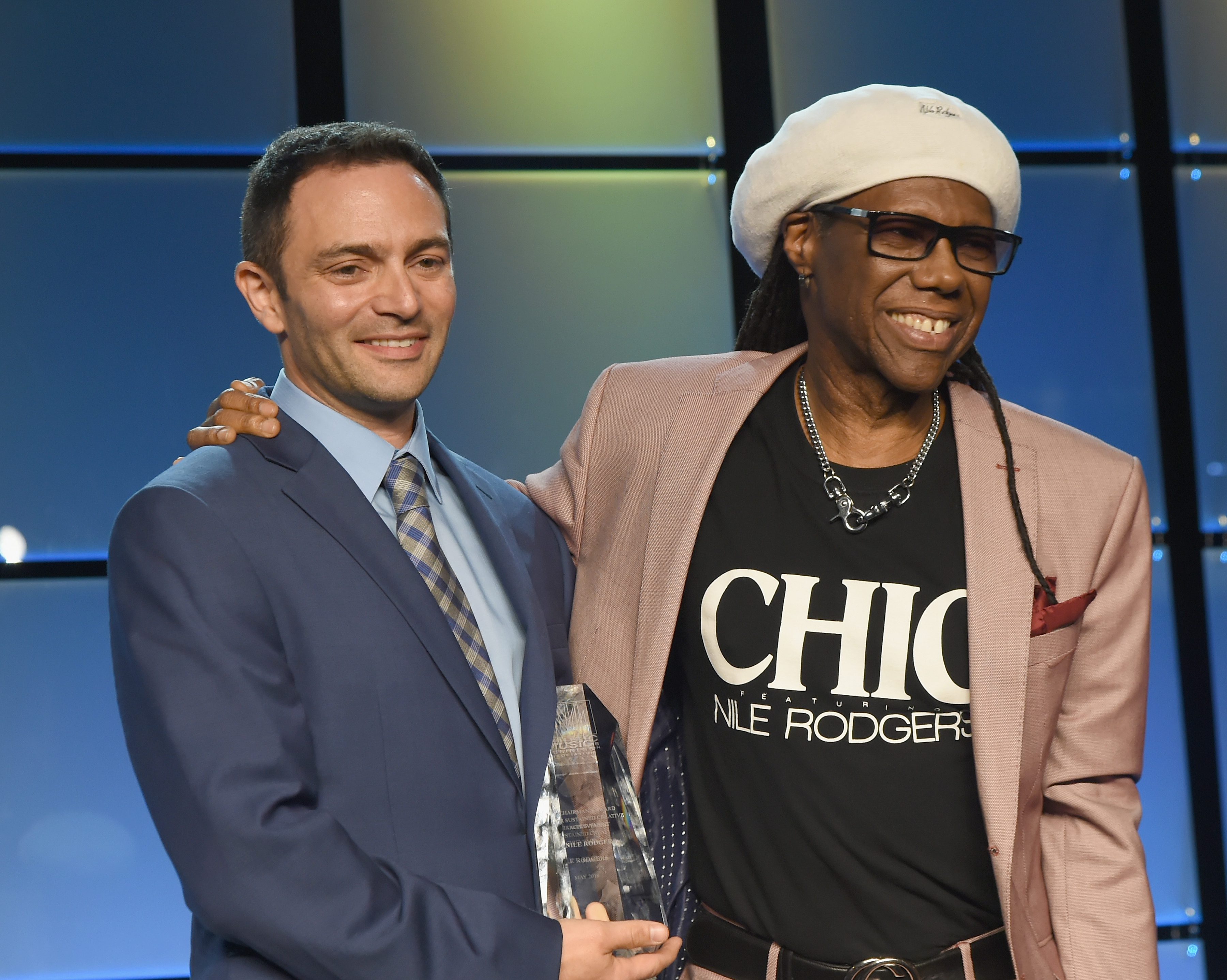 Legendary producer/artist/writer/arranger Nile Rodgers was honored with Chairman’s Award for sustained creative achievement. He has credits on album sales totaling 500 million. He is currently Chief Creative Advisor at Abbey Road Studio. Rodgers recalled gambling on a newcomer, Madonna. Rodgers forewent an advance from the label with the assurance that if the project moved more than 3 million, he would retroactively receive “an embarrassing, really high number. We sold 25 million records,” recalled Rodgers. “I say this with complete humility.

“I’ve been in this business all my life. I do this job because I love the artists I work with and I love the labels I fight with. If I make wacky mistakes, it’s not because of ego, it’s because I’m trying to do something groundbreaking that we can look back upon years later. In this business, where we have a lot of people who are not necessarily trying to be original—but trying to make hits.” 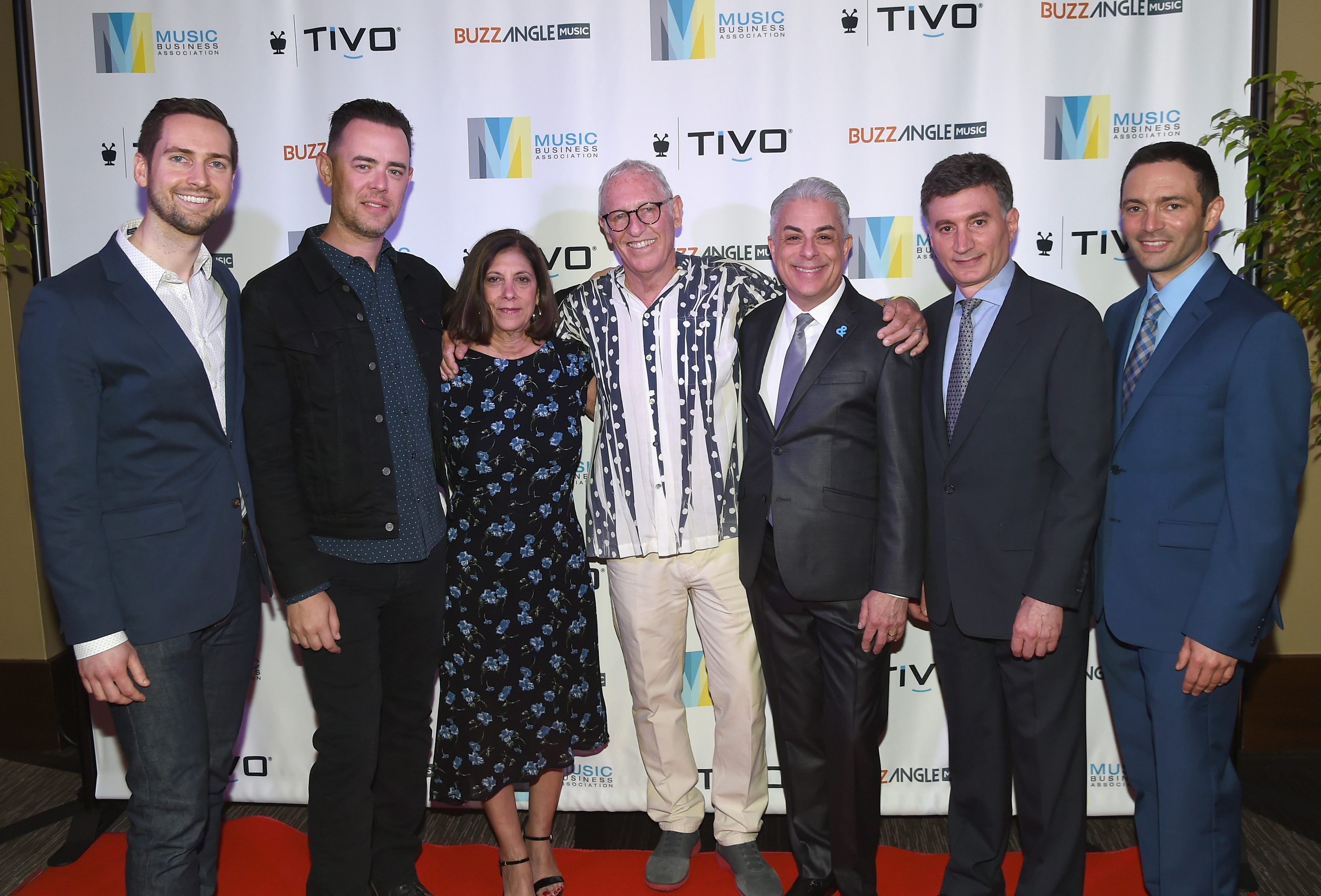 During the Music Biz luncheon, the organization honored the late Tower Records founder Russ Solomon as the inaugural inductee to the Music Business Hall of Fame. Solomon was noted to have created and revolutionized music retail, operating his once-billion dollar business and achieving the Forbes 400 list. Although Solomon unexpectedly passed in March, Donio assured attendees that Solomon was aware of his induction. Widow Patty and son Michael accepted on his behalf, alongside the director of the 2015 All Things Must Pass documentary, Colin Hanks.

“My father received many rewards during his lifetime,” said Michael Solomon. “There were some awards he took more seriously. There was one annual award, however that Russ took very seriously and competed for it—wanting to win it more than anything. That award was NARMS Retailer of the Year. He wanted this award to honor the entire Tower family, he felt very strongly about Tower as a whole.” 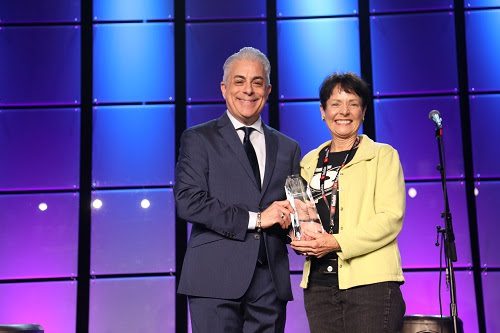 Wrapping the breakfast was the presentation of the Independent Spirit Award to the Radakovitz Family, owners of the Sacramento, California-based record store chain Dimple Records. With seven retail locations, Dimple Records promotes local artists, labels and studios; selling tickets in-store for shows at local venues; running charity events and supports music and sports programs in school curriculums. The Radakovitz famiy even purchased the final venture of Russ Solomon, also based in Sacramento.

Dilyn Radakovitz accepted the award for their 52 years in the music business on behalf of her family, including John, her husband of 50-years and sons Oliver and Andrew. John was absent due to an eye surgery. Dilyn serves on boards, including that co-organizing Record Store Day, which was announced at the breakfast to have sold more vinyl albums than any other RSD (733,000), with 80 percent of those sold at independent retailers.

Additional appearances at the Music Biz breakfast included Black River recording artist Kelsea Ballerini and breakfast sponsor CMA’s Sarah Trahern. Ballerini was surprised with a plaque from Sherman and the RIAA, certifying her “Legends” Gold. Donio was surprised for his 30-years of service to the 60-year-old Music Biz/NARM by board Chair and Facebook representitive Fred Beteille and board Vice Chair Steve Harkins, of entertainment distributor Baker & Taylor.

The luncheon additionally honored an absent Julia Michaels with the Breakthrough Artist Award; the record-breaking success of ‘Despacito’ with the Outstanding Achievement Award; and Ed Sheeran with its Artist of the Year honor. 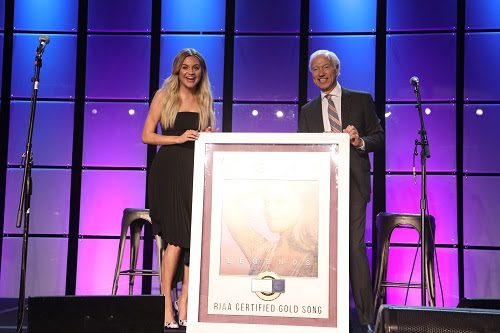 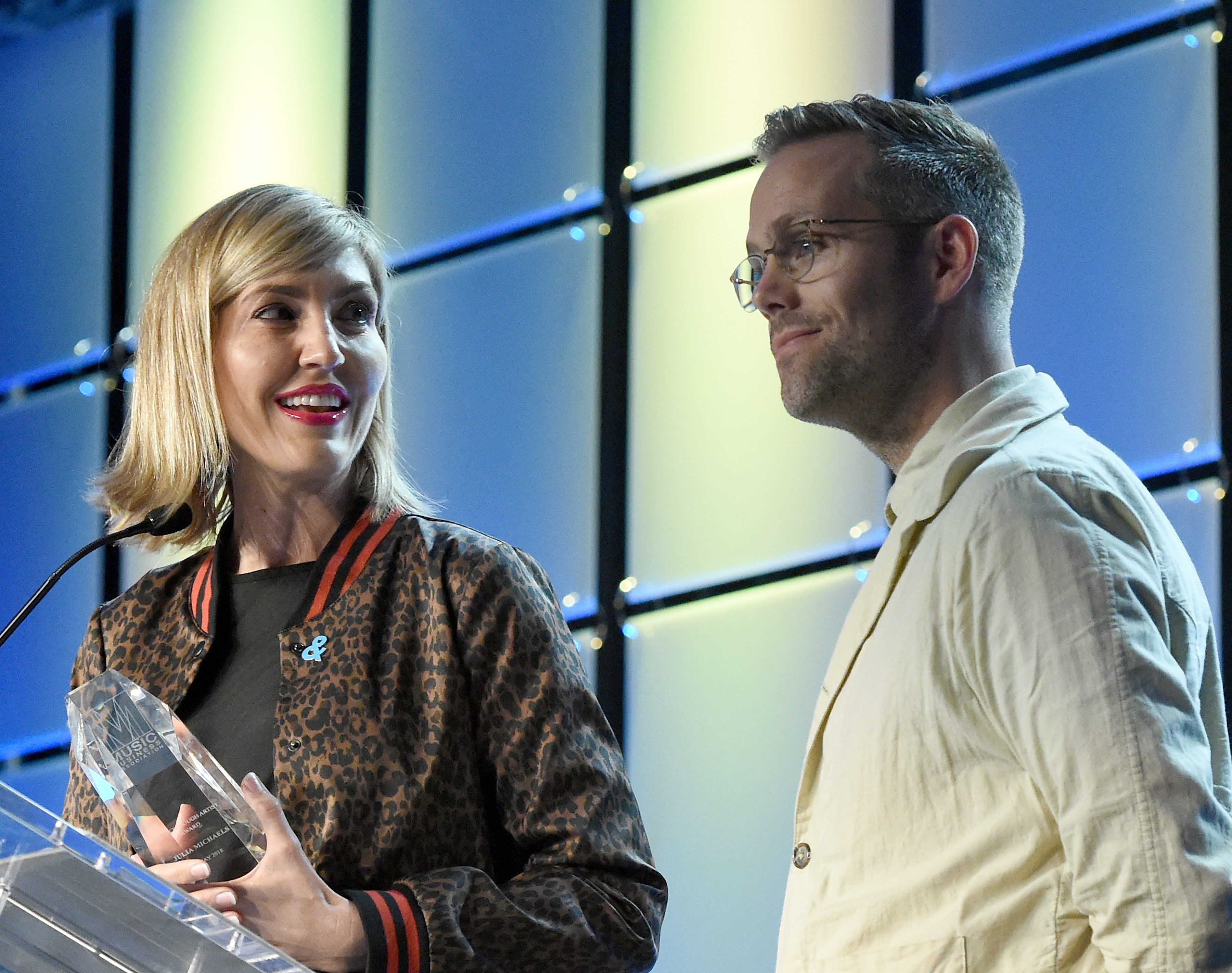 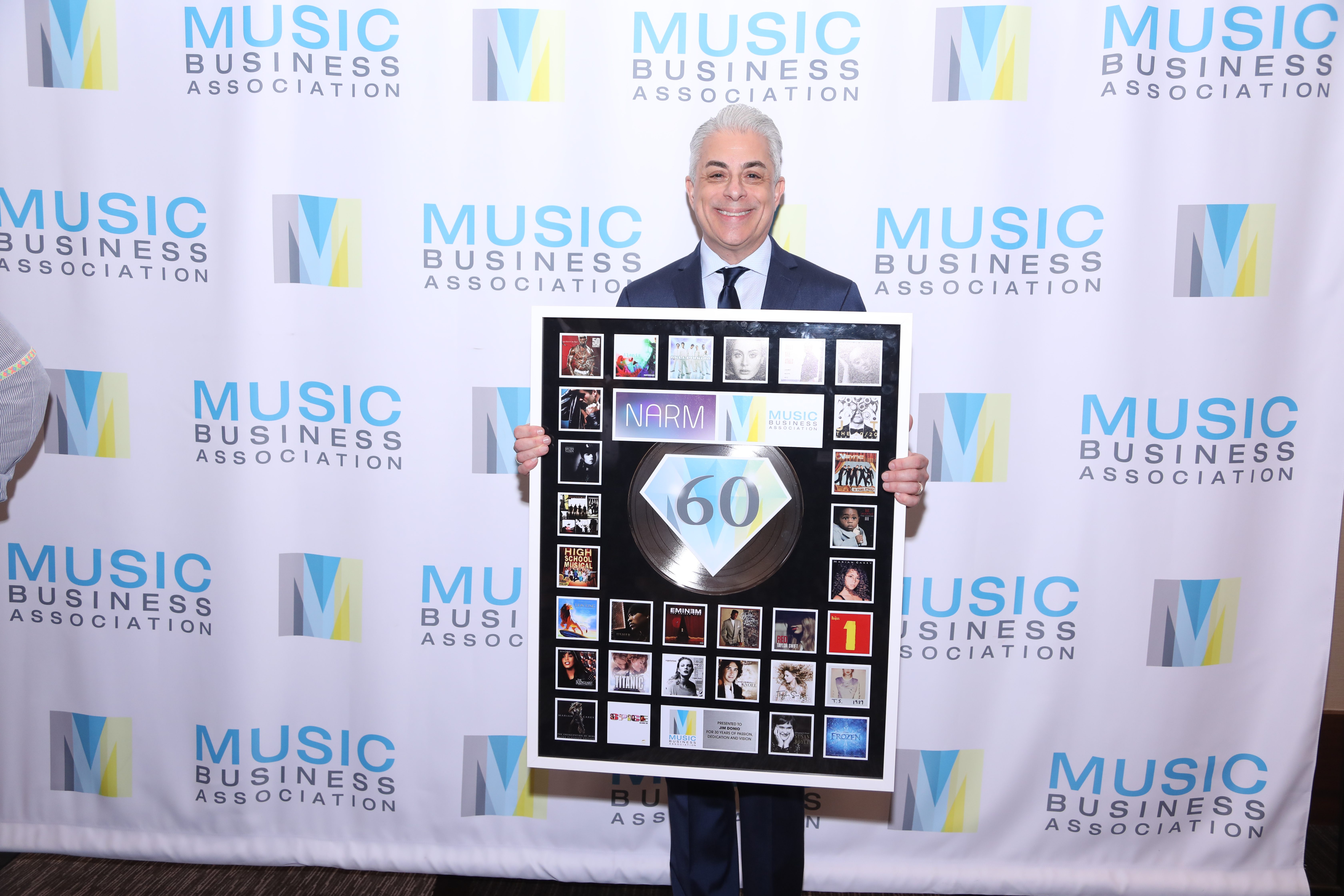