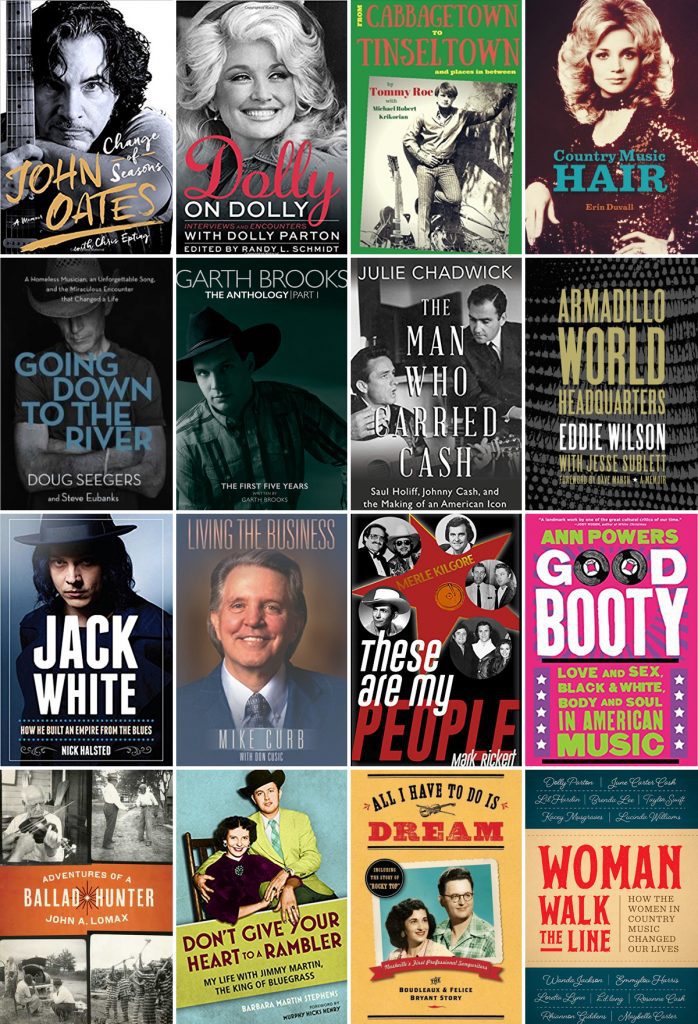 Among those with new memoirs are Charlie Daniels, Wayne Moss, Naomi Judd, Norbert Putnam, Jessi Colter, Rory Feek, Charlie McCoy, Jim Dickinson, Billy Burnette, Jerry Foster and Scotty McCreery. Of these, I’m Just Dead, I’m Not Gone by the late Dickinson is the most entertaining. Gathered below are some other notable current music “reads.”

ALL I HAVE TO DO IS DREAM: THE BOUDLEAUX & FELICE BRYANT STORY
By Lee Wilson (Two Creeks Press, $19.95)

If you don’t know who the Bryants were, you should. They founded the Nashville songwriting community and have an incomparable catalog of hits. This clearly written account of their star-crossed life together is a crash course on how we became Music City.

JACK WHITE: HOW HE BUILT AN EMPIRE FROM THE BLUES
By Nick Hasted (Overlook Omnibus, $29.95)

Well researched and thorough, Hasted’s book unwraps the enigma that is rock star White (ne John Gillis). It is particularly insightful in its depiction of his formative years in Detroit. The author romanticizes the Motor City’s gray decay and sneers at Music City’s technicolor success.

What a clever idea. What a disappointing book. I knew we were in trouble when a photo of Jeannie C. Riley was misidentified as Janie Fricke.

Schmidt chronologically reprints key Dolly Parton magazine interviews from her earliest days as a Nashville newcomer through her rise to megastardom. She is, of course, consistently charming. The compiler comments in the introduction that reading the book, “is to witness a slow and steady development of media manipulation, all masterminded by her.” I object to this depiction. In what way does this make her different than every other copiously interviewed superstar?

DON’T GIVE YOUR HEART TO A RAMBLER: MY LIFE WITH JIMMY MARTIN
By Barbara Martin Stephens (University of Illinois Press, $19.95)

The late Jimmy Martin (1927-2005) crowned himself “The King of Bluegrass.” He was a grandiose, gifted, alcoholic, self-pitying, volatile, outrageous, magnificent showman. Stephens bore his children, managed his career, booked his shows and endured his emotional and physical abuse. It’s all here in this extraordinary memoir. And it turns out that this pioneering female music business figure is also a terrific story teller.

This volume covers the first five years of the superstar’s career. You won’t find many personal revelations in the prose. He comes across as a fundamentally decent and very loyal fellow. It’s mostly an “inside baseball” account of songs, shows and recording sessions. The real value in the book is its cornucopia of previously unseen photos. The package also contains five CDs of 52 songs. Nineteen of these are previously unreleased demos, first takes or new tunes.

FROM CABBAGETOWN TO TINSELTOWN
By Tommy Roe (Tommy Roe, $24.00)

The singer of “Dizzy,” “Sweet Pea” and “Jam Up and Jelly Tight” starts out by defending his honor as “The Father of Bubblegum Pop.” Co-written with Michael Robert Krikorian, the book quickly veers from being an account of the heady days of “Sheila” and “Everybody” into being a right-wing screed. Hollywood is crooked and corrupt. The ‘50s and ‘60s were happy and carefree and white. Society was better then. Our music was better. Today’s music sucks. And hey you kids get offa my lawn.

THE MAN WHO CARRIED CASH
By Julie Chadwick (Dundurn Press, $19.99)

It turns out that manager Saul Holiff was just as intensely complex as his famous longtime client, Johnny Cash. This account of his career is an excellent book, full of insight about what made The Man in Black tick. If you’re a Cash fan — and who isn’t? — this is essential reading.

This Rock ’n’ Roll Hall of Fame member became an international superstar as half of Hall & Oates. He is now a part-time Nashvillian. Written with Chris Epting, his memoir is a fascinating recollection of his journey. The tales are really well told — in his case, being a songwriter is apparently only a step away from being a fine prose stylist. The book comes with a five-song sampler CD of the Americana music Oates makes in Music City today.

WOMAN WALK THE LINE: HOW THE WOMEN IN COUNTRY MUSIC CHANGED OUR LIVES
By Holly Gleason, editor (University of Texas Press, $24.95)

It is a highly readable collection of essays by female music writers dwelling on their heroines. Like most anthologies, it’s a mixed bag. Rosanne Cash’s entry about June Carter Cash is an elegant jewel. Holly George Warren’s love for Wanda Jackson shines through every line. Elysa Gardner’s essay on Taylor Swift made me want to applaud. Ronni Lundy totally gets Hazel Dickens. But the Rita Coolidge piece is incoherent. And I simply did not believe the testimonies of several of these writers. Particularly the ones that pen something like this: I was a New Yorker who loved alt rock, and then I found out about this country female, and she inspired me. A few more Nashville voices would have been welcome. Alice Randall, Wendy Pearl, Gleason and Aubrie Sellers are here, but Juli Thanki, Jewly Hight, Cindy Watts, Kay West, Ann Powers, Beverly Keel and several other worthy Music City journalists are not.

ADVENTURES OF A BALLAD HUNTER
By John A. Lomax (University of Texas Press, $18.95)

This is one of those classic music books that I have always meant to read, but never did. Originally published in 1947, it chronicles the folk song collector’s travels throughout America to find and preserve “Home on the Range,” “Irene Goodnight,” “Midnight Special,” “Git Along Little Dogies,” “Rock Island Line,” “In the Pines” and hundreds of other work songs, lullabies, spirituals, blues songs, fiddle tunes, spirituals, banjo melodies and other American folk music that might otherwise have been lost. I had always assumed that it would read like an “academic” book. It is anything but. It is immensely warm and engaging. Highly recommended.

THESE ARE MY PEOPLE: THE MERLE KILGORE STORY
By Mark Rickert (Writelife Publishing, $17.95)

The flamboyant Merle Kilgore (1935-2005) was a one-of-a-kind, oversized personality. This Nashville Songwriters Hall of Fame member was a character almost impossible to describe on the printed page. Just about everybody in the music biz has a story about him. Grandson Mark Rickert knows his subject is too big to capture, but he gives it the ol’ college try.

I don’t know Eddie, but I do know Jesse, and he makes the colorful impresario of the Armadillo jump off the page. By turns rollicking, hilarious, wise and crazy, the story of Eddie and his legendary Austin venue is a real page turner. I would have loved to have been on this trip with this larger-than-life Texas character.

GOING DOWN TO THE RIVER
By Doug Seegers (Thomas Nelson/HarperCollins, $24.99)

Written with Steve Eubanks, this is Doug Seegers’ truly remarkable saga of homelessness, addiction and music redemption. For years, he was a street musician playing for tips on Lower Broadway in Nashville. Seegers performs in a sturdy, hard-country, throwback style that caught the ear of a Swedish documentary movie maker. After the film was shown in Sweden, Seegers and his song “Going Down to the River” went to No. 1 on that country’s charts. The musician tells his harrowing tale in an unsensational, dry, plain-spoken manner that makes it entirely gripping. He’s a walking miracle.

The outstanding philanthropist and owner of one of America’s largest, longest lasting independent labels has quite a tale to tell. And it’s loaded with life lessons and show-biz know-how. The book could have used a stronger editor, since there is considerable repetition of its key points. A fact checker would have been useful as well. The title of Glen Campbell’s last Grammy winning song is incorrect. The chronology of Felix Cavaliere’s career is wrong, and there are other factual errors. But this is still an important volume.