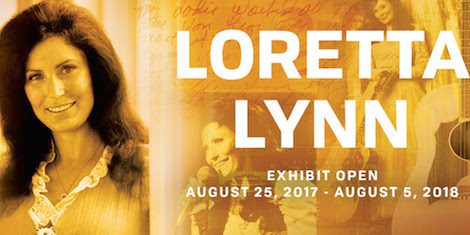 The Country Music Hall of Fame has revealed more details for its exhibit Loretta Lynn: Blue Kentucky Girl, set to open on Aug. 25.

The exhibit chronicles Loretta Lynn’s 50-plus years in the country music industry, and will include her handwritten manuscript for the 1970 hit “Coal Miner’s Daughter,” along with the American DR-332 ribbon microphone used during her first recording session at Western Recorders Studio in Los Angeles in 1960. That session would yield her first single, “I’m A Honky Tonk Girl.”

Numerous dresses will be on display, including the green chiffon gown Lynn wore to the 1972 CMA Awards, where she was named Entertainer of the Year. The red dress Lynn wore on the cover of her 1968 album Fist City, will also be included in the exhibit, as will the 1956 model 99 Singer sewing machine Lynn used to make her own stage clothes early in her career.

The Presidential Medal of Freedom, presented to Lynn by President Obama in 2013, will also be on display.

Lynn, who is recovering from a stroke she suffered in May, says, “I am so excited for the Country Music Hall of Fame and Museum’s exhibit to open this month. It’s gonna show off my 50 some odd years in country music, and I’m so proud to share my life and music with the museum. Y’all come see us!”

“Owen Bradley once described Loretta Lynn as ‘the female Hank Williams,’” said museum CEO Kyle Young. “Like Williams did, Loretta has created music that echoes the challenges and joys of the working class. She has influenced countless artists who followed her, and her unique sound continues to transcend genre and inspire her many listeners. We are thrilled to share the story of this ‘blue Kentucky girl,’ and we look forward to the day when Loretta feels well enough to see the exhibit herself.”