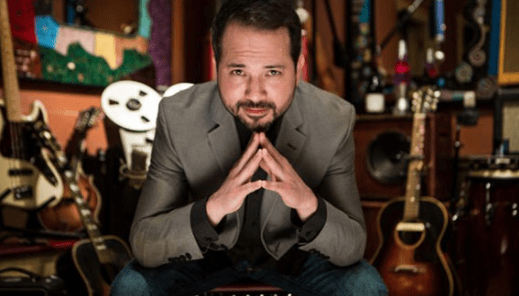 Watching Dave Brainard’s producing career unfold has been like watching a rookie knock it out of the park their first three times at bat.

Brainard’s first home run came with Jamey Johnson’s independent album in 2002, which propelled both he and Johnson. Next time up, Judge Jerrod & The Hung Jury was the first of two Jerrod Niemann’s albums produced by Brainard in 2010 and 2012, which not only yielded Brainard’s first No. 1 single as a producer, “Lover Lover”, it also sold Platinum in digital single sales. The same album went on to yield a top 5 with “What Do You Want,” and a top 20 with “One More Drinkin’ Song” and … it landed Niemann’s deal with Joe Galante and Arista Nashville. Then, his third time at bat, Brainard knocked it over the center field wall, producing Brandy Clark’s 12 Stories album in 2015, earning Clark and Brainard a Grammy nomination for Best Country Album that same year and Clark a nomination for Best New Artist; two CMA nods (including a nomination for Clark for New Artist of the Year, and a Best Song of the Year win for “Follow Your Arrow”), and a 2017 ACM nomination for New Female Vocalist of the Year and MusicRow Magazine’s Breakthrough Artist of the Year Award. All of which solidified Brainard’s position on Nashville’s most sought-after ‘A-List’ of rising producers.

Brainard has also acquired publishing deals with Balmur Music and Big Picture that led to cuts with Neal McCoy, Sammy Kershaw, Kelly Coffee, Ricochet, Brooks & Dunn and the Hunter Hayes/Jason Mraz’s duet, “Everybody’s Got Somebody But Me.” He’s also toured as a sideman with Rebecca Lynn Howard, Anthony Smith, Marcel, David Nail, and Jessica Andrews. Brainard established his own deciBel Productions and Mix Dream Studios with engineer Brian Kolb, as one of Nashville’s most sought-after production facilities, for many of Nashville’s most prominent songwriters like Steven Dale Jones, Dallas Davidson, Ben Hayslip, Rhett Akins, Mark D. Sanders and John Goodwin.

Then one night while Dave was out with a friend, he was beaten/physically assaulted, which left him hospitalized, with a broken jaw and half of his teeth knocked out, on a long road to recovery, through the balance of 2015 and 2016.

TPC: Has your court case against your assailants been resolved?

DB: It’s still ongoing. We got a call last week from the DA. A trial date is set for a few months from now. Between now and then, I believe there’s some legal formalities that’ll play out yet.

DB: When they came out with their side of the story, they definitely had their own version of things. I’m not too worried about it. At the end of the day, I wake up and make music with some of the most talented people in the world… and that’s no lie.

TPC: Is your studio still rockin’ with songwriters?

DB: Nowadays, not being in the demo business, I’m not around as many songwriters as I used to be. Now it’s limited mainly to the songwriters involved with the projects I’m producing. But I’m always looking to connect with songwriters and publishers because that’s really the life blood of this whole business.

TPC: Who are in your close circle of writers?

DB: I love John Goodwin. Often misunderstood, but a true genius. When he hits it off with an artists that I have write with him, I feel like the edges of their creative dialogue are expanded. I know he’s done that for me personally over the years. John’s one of the best writers I’ve been around, because he comes at it from such a unique and brilliant angle.

On the Jenny Tolman project, I’ve become a fan of Aaron Raitiere, who writes for Dave Cobb. He’s recently got a couple cuts with Miranda Lambert. He’s just a fun co-write where everything that comes out of your mouth turns into a song. He’s got that Southern take on things but is also pretty dang smart … Ivy-league education.

There’s a few others that I like to get involved with various projects, like Rory Bourke, Mark Sanders, Jennifer Denmark, Greg Becker etc. but I enjoy getting to circulate in the different camps that come with each project. Sometimes I’m involved with the co-writing, other time’s I’m connecting artist with other writers and publishers, but many times I’m just getting to meet and hang out with the songwriters surrounding an artist, and that’s always cool.

The Producer’s Chair: Who has been your most cherished business mentor?

DB: That one’s easy…Tommy Jackson. He’s the founder of First Note Entertainment, as well as a Barron’s Award-winning financial wizard, a five-time Alabama High School state champion football coach, and on and on. I met him a few years ago when I was finishing up the Kaci Bolls record. She was doing some vocals for a demo session of his and they got to talking about her record. So they came over to my studio and listened to what we were doing and were blown away. We’ve been great friends ever since.

He and his wife Michelle have this horse farm/songwriter’s paradise down in Santa Rosa, Florida, where I like to go to reset, ride some four wheelers, shoot some guns, write some songs and get inspired.

Most times we get together, he talks at such a profound level it hurts my head… I call that the ‘pouring a gallon of milk in a shot glass’ phenomena. He’s been such a mentor to me on a business and spiritual level.

TPC: When considering an artist to produce, what are the most important things that you look for?

DB: I think the first thing really is a gut feeling when I hear someone sing or play. I think in the back of my mind, I’ve got a pretty good sense of what kind of artist I’d be good for, and what I’d probably suck at. Beyond that, I love working with great country artists and I love what happens when I mix what I do, which isn’t necessarily a traditional country approach to making records, to someone who has an honest approach to singing and writing. Whether someone is meant for the Bluebird, or bound for the Bridgestone, I just love it when an artist is original, authentic, intelligent, and has the right amount of crazy. I think if you look at the ones I’ve had success with – that all applies.

DB: When you look at an artist as a business, there’s only a handful of ways to make money. Make a pie chart. There’s the sales and sync license slice from the master recordings, there’s the copyright slice, there’s the touring slice, there’s the merchandise slice, and there’s the sponsorship slice. Maybe some others too, like the leveraging of your brand to gain access to wherever as well as own companies and real estate and marijuana farms and on and on… but let’s not include that… that’s more like the whip cream.

A 360 deal is simply a record label negotiating to take a bite out of the other pie slices, because hell, they’re the ones that own the oven and pay the chef. Something like that…

It seems fair to me. But like any deal, it’s all negotiated based on what you bring to the table.

TPC: What are the most important aspects of artist development?

DB: In the studio, one of the most important aspects of artist development to me is taking the time to experiment. Maybe some producers do it with the wave of a wand or a turn of the knob, but I need the room to make mistakes and establish an environment where the artist feels understood but inspired to explore the edges. I absolutely love the process. I also really enjoy being a part of building the village around an artist and helping bring quality people into the dream.

That’s my vantage point from the creative side, but it goes way beyond the songs and what ends up on a record. I’ve gotten to know many great people in the marketing side of artist development and have such a respect for what they do. All that analytics and stuff is pretty fascinating, I’m glad someone does it!

TPC: What’s your best advice to new producers, on how to get started?

DB: That’s such a broad question because everyone comes into it their own way. I came to Nashville with the goal to be a prolific songwriter, but I had an 8-track recorder and ended up doing the work tapes and demos for my co-writers and then eventually other songwriters. I also stumbled into playing on the road and doing radio tours for major label artists and got to experience how the radio culture worked. When I had my writing deals, I was double booked everyday so I did my songwriting pushups and I built a ton of relationships. Eventually I opened my own studio and learned how to be an entrepreneur, keeping track of budgets watching a bottom line. After getting beat down by the business a few times, I fought the urge to become bitter and learned how to be a positive spirit in the creative process… and in all that, maybe there’s some advice in there. I think every producer brings a whole closet full of unique experiences and skill sets and that becomes their tailored approach to making records.

TPC: When did you start to trust your judgment, of what excellence is?

DB: That’s probably military. It goes back to being in the Air Force … integrity, service before self, teamwork and attention to detail … the core values. It comes from sitting there watching and feeling the gravity of four-star generals command a room of other powerful men and women. It comes from learning proper protocol and observing the teamwork that it takes achieve certain things and leadership. In this industry I look for that too. I’ve felt that in a room with the Joe Galantes and the Tim Dubois’. It’s a very rare quality, to feel the weight or the gravity of leadership in a room the way I used to feel when I’d see Admiral Childs give a speech. Excellence to me kind of comes from somewhere in there. Excellence is this illusive thing that, keeps on making you want to achieve, the best you can … knowing you’ll always fall short. Kinda like a carrot on a 50-foot stick.