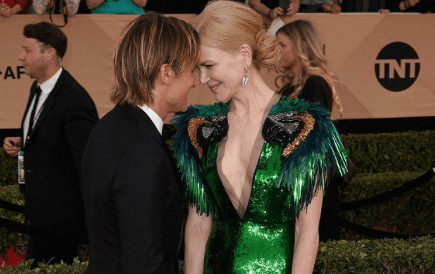 Keith Urban and Dolly Parton were on hand at Sunday’s (Jan. 29) Screen Actors Guild (SAG) Awards at the Shrine Auditorium in Los Angeles in support of their respective offscreen and onscreen partners.

Urban attended the 23rd annual ceremony in support of his wife Nicole Kidman, who was nominated for Outstanding Performance by a Female Actor in a Supporting Role in Lion (2016).

For the 53rd SAG Life Achievement Award, Parton presented the legendary actress/comedian Lily Tomlin in honor of her encouraging, exemplary values. Both stars appeared in the 1980 film 9 to 5 and have been profoundly involved in literacy programs. A reunion of all 9 to 5 co-stars was cut short when the film’s production company owner Jane Fonda became ill and had to cancel.

Tomlin recently honored Parton during her receipt of the CMA’s Willie Nelson Lifetime Achievement Award during the association’s 50th annual program in November. Tomlin’s country roots extend to Reba McEntire, whom she partnered with for a season of Malibu Country (ABC).

The SAG Awards, which were broadcast live on TBS and TNT, has begun an auction including many ceremony items among experiences in a benefit for the SAG-AFTRA Foundation.