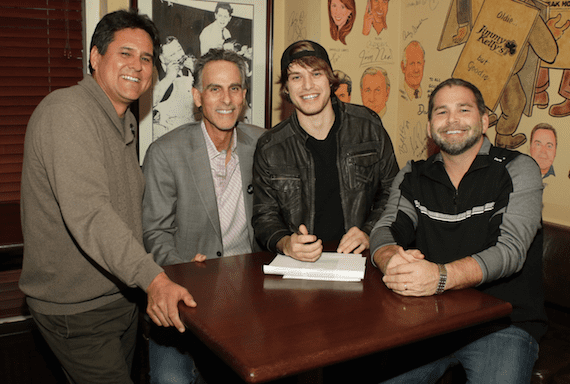 Michael Tyler, a 22-year-old singer/songwriter from Thayer, Missouri, has signed a recording deal with Reviver Records.

Tyler has co-written Dierks Bentley‘s new single,  “Somewhere on a Beach,” as well as Jason Aldean‘s “Laid Back” from the album Old Boots, New Dirt, and the LOCASH tunes “Shipwrecked” and “Ain’t Startin’ Tonight.”

“In signing Michael, we feel that we have landed an artist who has his ear very much in tune with where the country music format is headed,” said Reviver President David Ross. “The industry is quickly finding out about Michael as a songwriter, and we believe that soon people are going to become huge fans of his as an artist.”

At age 13, Tyler had an online meeting with Aldean’s producer, Michael Knox, who is now his manager. Tyler signed to peermusic as a songwriter in 2012, and is still repped by the publishing company. Knox is a Vice President at peermusic and CEO/President of Music Knox.

Reviver Records is distributed by BDG, RED – A Division of SONY Music, LLC.