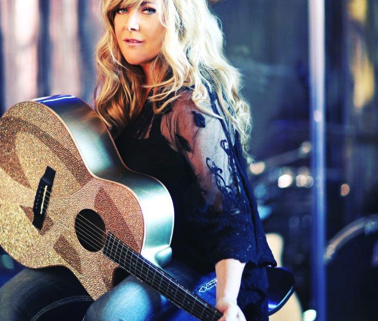 Whether you’re a budding artist looking for a producer, or a seasoned one, you may want to consider Jamie O’Neal … but only if you’re prepared to sing your ass off.

When O’Neal (whose birth name was Jamie Murphy) was 2 years old, her parents Jimmy and Julie Murphy, both professional musicians, moved to Hawaii. When O’Neal was 9, her parents took the family to Las Vegas, where they performed at the Golden Nugget casino in an act called The Murphy Family. Talent must be in the genes because O’Neal’s sister, Minnie Murphy, also became a recording artist.

O’Neal’s career came together at 29 when she signed her first publishing deal with the one and only Harold Shedd at the Music Mill. (NSAI has since bought the Mill and their offices are there.)

She recalls, “When I got first got to Nashville, Russ Zavitson said the magic words to me that I will never forget. He said, ‘Harold’s wanting me to sign you and why should I have to sign you? What makes you so special? How do I know you can even write?’ I remember telling Russ, ‘I think I can sing just as good as anybody else and I will prove it to you. Give me three months of a trial. If you don’t like what I do in three months, then you can send me home. If you like what I do, then you pick up my option.’ And he said, ‘Well, that’s fair.’ That’s how we worked out our deal. That was it. It was three months. There wasn’t a big negotiation of ‘I want this and I want that.’ He gave me three months. And I wrote everyday. Sometimes twice a day. They ended up picking up the option and I ended up staying.”

The incredible part is that O’Neal doesn’t play an instrument.

“I write with my voice,” she says. “A lot of times I start with a drum loop or something on my iPad. And I’ll sing the melody in the car which allows you a lot of freedom because I have always relied on my vocals. To me, I go by instinct and my ears. My whole life has been that way. I’m pretty quick at harmonies, layering parts and writing melodies. I totally rely on my ears and instinct for everything.”

As a songwriter, she has landed cuts with LeAnn Rimes (“Surrender”), Reba (“Pink Guitar”) and Martina McBride (“How Far”). She also placed songs on the soundtracks of Bridget Jones’ Diary and When We Were Soldiers, as well as on the ABC smash Desperate Housewives. No doubt O’Neal’s vast experience in business matters, coupled with her compassion for artists, led to the formation of Momentum Label Group in 2012. Her decision to start producing outside artists really kicked in when her father Jim Murphy discovered their flagship artist Rachele Lynae. It appears that everything has come full circle, when it comes to family.

In 2014 O’Neal and her engineer/musician husband Rodney Good produced her current album in their studio. Eternal is an 11-song collection that infuses country classics with fresh energy — featuring O’Neal’s own unique take on tunes such as “Leavin’ On Your Mind” (Patsy Cline), “The Sweetest Thing” (Juice Newton) “Help Me Make It Through The Night” (Kris Kristofferson), “I’ve Done Enough Dying Today” (The Gatlin Brothers), and the George Jones and Tammy Wynette classic duet, “Golden Ring,” which features O’Neal with Andy Griggs.

Asked what she learned from Keith Stegall, her producer while she was signed at Mercury, O’Neal replies, “I think listening to the artist. That’s how he was. He pleases you and he lifts things to the next level and makes it even better by bringing what he brings to the table. That’s one thing that he’s great at, including the artist in ideas. I’ve been in the studio with some people who make me feel like the little woman in the corner recording and ‘We’ll get to you later, honey, with your ideas and things.’ He wasn’t like that at all.”

O’Neal says the decision to launch Momentum came from seeing other independent labels in Nashville thriving.

“We started thinking, ‘We can do this ourselves,’” she says. “The indie thing really started happening and we started thinking, ‘Why can’t we be an indie? Why can’t we be the team behind this?’ There were several models to look at who have had success, like Broken Bow, Black River, Big Machine. That’s a huge machine! We’re doing it in a smaller way but even if you’re smaller to start out with, we have bigger dreams and plans down the road. Developing Rachele Lynae, developing other artists down the road and still writing and recording my own music is the goal.”

Asked if Lynae required a great deal of artist development, O’Neal says, “Not as far as knowing who she was and what she wanted to do with her voice. I feel like in the studio, I help her find the best that she can be, and bring the best vocal out of her.”

O’Neal also helped with Lynae’s presentation. “She had never been a big shopper. She wasn’t really into her looks and style. She’s very down to earth. I took her shopping and introduced her to different stylists. She’d never colored her hair, never put highlights in her hair. I enjoy A&R and coaching, everything that comes with it. There is so much development in the early stages. Also with Rachele’s family, we all work together very closely with her career. Her sister sings with her. Her Mom is very hands on in her day-to-day.”

Because she’s seen so many sides of the business, O’Neal understands what indie labels can offer that major labels can’t.

“I think artists taking ownership. Having a bigger piece of what you’re doing,” she explains. “Because we are a smaller label, the creativity is there for everyone to throw their ideas into the pot. It’s not like we have eight singles and eight artists waiting to get out and onto the radio. A lot of what these labels are able to do is trade off: ‘Hey, I’ll give you a flyaway if you play my new artist.’ And they’ll add that record because they get this big contest with the bigger artists. We don’t have that trading power and that I think unfortunately, those trade offs never go away. But the independents can break artists. Look at Kelsea Ballerini. It can happen. With enough time, money and the right song you can break through.”

As a producer, O’Neal says that vocal performance is the foremost thing on her mind.

“When you are a singer in the booth, it’s one thing to have the producer focusing on the musicians and what they want the track to sound like. But a lot of producers can’t sing,” O’Neal says. “So they can’t tell you how to phrase something. I think for me the number one thing I would say that I’m best at is how to phrase something or sing an ad lib. … If an artist were to say something about me I would hope it would be that I made them better vocally. That I bring out the best vocal in someone. I’m going to make you sing your butt off when you’re out there in the booth because I think that’s what it’s all about.”