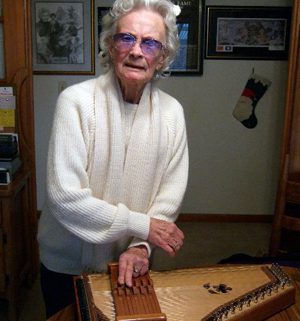 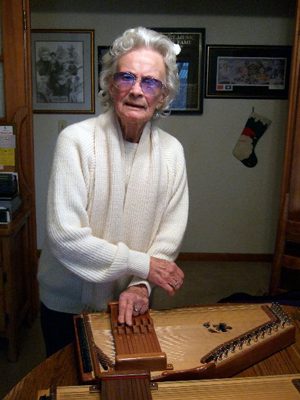 The daughter of Country Music Hall of Fame (CMHoF) member Ernest V. “Pop” Stoneman, she was a recording artist, a pioneer bluegrass female, a preserver/popularizer of the autoharp and a colorful personality. She was 90 when she passed away Thursday morning (July 23) at her home in Manchester, Tenn.

After her father died, Patsy assumed leadership of the family band The Stonemans. She campaigned for the next four decades for Pop’s induction into the CMHoF. Pop Stoneman (1893-1968) was finally inducted in 2008.

Patsy played guitar, jaw harp and banjo, in addition to autoharp. She was the family’s historian who saved most of its memorabilia while also maintaining her own musical career. She was born in 1925, the year her father became one of country music’s first million-selling artists. His “The Titanic” was a blockbuster hit that year, and it remains the most famous song about the 1912 ocean-liner disaster.

In 1927, he was the star who drew others to the Bristol, Tenn. recording sessions where Jimmie Rodgers and The Carter Family were discovered. Although one of country’s earliest stars, he fell upon hard times during The Depression of the 1930s.

The Stonemans had 23 children, 13 of whom survived to adulthood. Several of the children became musicians. Patsy and older brother Eddie (1920-2001) began performing comeback shows with their father around 1939.

After a time spent away from music, Patsy again performed with The Stonemans in 1964-65. She became one of the voices in the Country Bear Jamboree animatronic show at Disneyland.

But Patsy was initially better known as the leader of her own group, beginning in 1963 in the Washington, D.C. area. This made her perhaps the first female bluegrass bandleader in history.
Meanwhile, Pop and her siblings moved to Nashville. The Stonemans had a string of country chart singles in 1966-68. They launched their own nationally syndicated TV show in 1966-67, and Patsy became a frequent guest on it. In 1967, The Stonemans were the CMA’s first Vocal Group of the Year winners. Pop died the following year.

At this point, Patsy took over as the leader of the family group and moved to Nashville. She recorded with The Stonemans on such LPs as A Stoneman Christmas (MGM, 1969), Dawn of The Stonemans’ Age (RCA, 1970), In All Honesty (RCA, 1970) and California Blues (RCA, 1971). In 1981, she assembled 17 extended family members and produced the acclaimed CMH Records double-LP The First Family of Country Music. Patsy’s husband John “Jack” Murphy became manager of the group.

Brothers Van (1940-1995) and Jimmy (1937-2002) were both singers in The Stonemans. Following their deaths, Patsy moved more and more to the forefront. With Donna and/or Roni, she recorded For God and Country (1990), The Stoneman Tradition (2012) and a number of other albums. In 1987, she also launched At Home With The Stonemans as a weekly show on WSVT radio in Smyrna, Tenn.

“I am not ready to hang up any of our instruments yet,” she said of her ongoing efforts to promote the family’s music. “We have too much to offer the country music business to just throw up our hands and quit.

“Besides, we have been in the business longer than anybody else, and it just wouldn’t be fair to Daddy to stop.”

She spearheaded the creation of Ivan M. Tribe’s 1993 book, The Stonemans. A number of reissues of Pop Stoneman’s music also kept his memory alive. Supported by all country historians, she campaigned relentlessly for her father.

Patsy Stoneman Murphy’s feisty, outspoken, fearless, funny and frank personality made her a media favorite. After her lively acceptance of her father’s induction into the CMHoF, fellow honoree Emmylou Harris exclaimed, “Patsy Stoneman, you are the BOMB!”

Patsy Stoneman Murphy is pre-deceased by her husband of 39 years, John “Jack” Murphy. She is survived by sisters Roni and Donna Stoneman. Visitation will be at Mount Olivet Funeral Home on Monday, July 27, 5-8 p.m. and on Tuesday, July 28, 11 a.m.-1.p.m. Her funeral service and internment will be held immediately following on Tuesday.