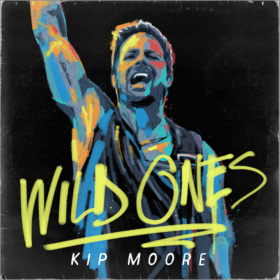 Kip Moore is readying his sophomore album, Wild Ones, for release August 21. Inspired by the dizzying life on the road touring Moore has been experiencing for the past few years, the CD features 13 tracks co-written by Moore with writers including Chris DeStefano, Brett James, Rodney Clawson and Troy Verges. It was produced by James and DeStefano.

“Wild Ones really encompasses everything I’ve been through out on the road since the first album, it embodies us as a band every night out on stage, it alludes to the traveling circus it sometimes feels like we are a part of,” said Moore. “I’m so glad that I’m able to finally let the fans know when to expect what we’ve been working on so passionately for the past couple years, to let them know the wait is nearly over.”

The first single from the new collection, “I’m To Blame,” is already rising up the charts, and Moore is gearing up to take the new music to the masses as a part of Dierks Bentley’s Sounds Of Summer Tour June 5.