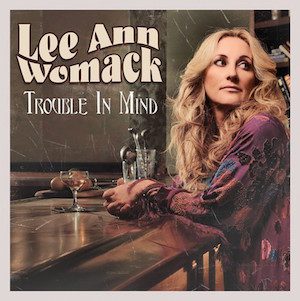 Lee Ann Womack will offer a limited edition 12″ vinyl release, titled Trouble In Mind, on Record Store Day, April 18. The singer-songwriter and husband/producer Frank Liddell discussed the possibility of a one voice/one instrument project, to offer unadorned versions of a few handpicked compositions.

Womack then teamed with Richard Bennett (Mark Knopfler/Steve Earle), who brought in several vintage guitars. The duo recorded several tunes in one afternoon, and picked three for Trouble In Mind.

“I think independent record stores are so important,” Womack says. “It’s the last temple of music you can take home… A place where people come looking for the rare, for the special or even just the record they have to buy one more time. But I love the idea of people selling records, talking about what’s on them, getting turned on to cool music. I wanted to be part of Record Store Day last year, but we couldn’t get it together in time. So this year, we started early. I got to have Richard Bennett, who is one of those musicians who can get so much heart and tone out of his guitars, come to the house. It was just the two of us, and it was awesome!”

The three songs are the blues classic “Trouble in Mind,” Roger Miller’s semi-obscure “Where Have All The Average People Gone?” and Ralph Stanley’s bluegrass gospel song “I’ve Just Seen The Rock of Ages.” The project is engineered by Chuck Ainlay and mastered by Paul Hamann at Suma Recording Studio.

Trouble In Mind is just the latest in a string of interesting collaborations Womack has taken part in during recent months. She co-hosted the International Bluegrass Music Awards with bluegrass stalwart Jerry Douglas, participated in a CMT Crossroads taping with John Legend, recorded with Ralph Stanley, and more.