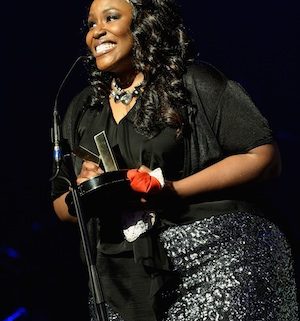 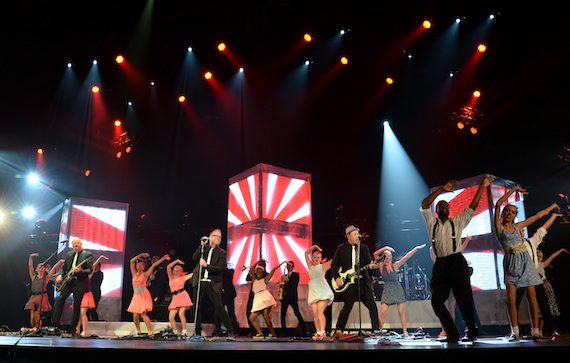 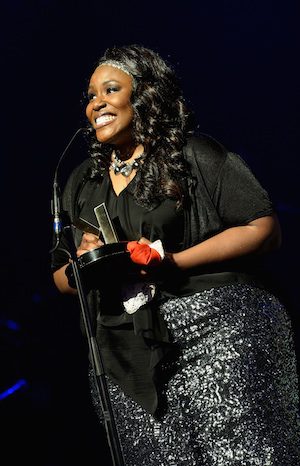 Mandisa was the fan-voted queen of the evening, picking up both Female Artist of the Year, and Song of the Year for “Overcomer.” The K-LOVE Fan Award-winning song was inspired by Mandisa’s friend who is battling breast cancer. “An overcomer is not someone who has arrived, but someone who has Jesus and chooses to fight every day,” she told the audience.
CCM fans were fervent in campaigning for their favorite artists–more than 2 million votes were cast for the awards. Chris Tomlin earned Male Artist of the Year honors, while Newsboys took home the Group/Duo award.
Matthew West and actress/Dancing With The Stars finalist Candace Cameron Bure co-hosted the evening. West was quick to offer plenty of references to Cameron Bure’s best-known role as Full House‘s D.J. Tanner. At one point, he brought out Matt Maher and a member of Tenth Avenue North for a unique collaboration of the popular ’80s/’90s television show’s theme song.
MercyMe‘s charged performance of their infectious single “Shake,” complete with dancers and a confetti-filled ending, jump-started the evening, instantly put the crowd in the mood to celebrate.
The awards offered more than 20 performances from Tenth Avenue North, Matt Maher, Chris Tomlin, Steven Curtis Chapman, Switchfoot, Natalie Grant, Building 429, Jamie Grace, Crowder, Francesca Battistelli, Casting Crowns (who earned the most coveted honor of Artist of the Year later in the evening), Kutless, Colton Dixon, Rend Collective, Jeremy Camp, and more.
Best Live Show nominees For King and Country‘s performance of “Fix My Eyes,” complete with a booming percussion, a light show that made the stage seem aglitter with neon stars, and a nonstop energy level, proved why they were deservedly nominated for the honor. “We are so passionate about music and sharing the message of Jesus, that this energy and creativity comes so naturally,” said the band prior to the show.
If an award was given out for Best Live Vocal Performance During An Awards Show, it just might have gone to Plumb, who stunned the audience with her powerful soprano on “Need You Now.”
Several collaborations made the lengthy performance lineup fit into a four-hour showtime. Ricky Skaggs joined co-host West for a jangly bluegrass rendition of West’s hit, “Hello, My Name Is…,” while Phil Wickham made his return to performing after having vocal surgery, for a collaboration with Big Daddy Weave on “Yours Will Be (Land of Glory).” Sidewalk Prophets’ David Frey was joined by Jamie Grace, Matt Maher, Francesca Battistelli, and Jeremy Camp for “Hope Can Change Everything.”
TobyMac was moved by his Best Live Show win. “Switchfoot is my favorite band to see live,” he said, honoring his fellow nominees. He also gave credit to his band. “We are a band of brothers who travel, who go deep into God’s word, and who try to love well. If I won this, it is because of my band.”
The members of Casting Crowns were quick to thank K-LOVE and the fans for their Artist of the Year honor. “Everything you do, know that you are doing it for a reason,” said Casting Crowns lead singer Mark Hall.
The evening closed out with hands raised throughout the room as Hillsong United performed their Worship Song of the Year-winning song “Oceans (Where Feet May Fail).”
2nd Annual K-LOVE Fan Award Winners:
Male Artist of the Year: Chris Tomlin
Female Artist of the Year: Mandisa
Artist of the Year: Casting Crowns
Song of the Year: “Overcomer,” Mandisa
Best Live Show: TobyMac
Group/Duo of the Year: Newsboys
Worship Song of the Year: “Oceans (Where Feet May Fail),” Hillsong United
First Christian Artist To Be On A 7UP Can: Jamie Grace
Film and Television Impact Award: God’s Not Dead
Sports Impact: Thomas Davis
Book Impact: You’ll Get Through This, by Max Lucado
Photos by Getty Images
[slide]