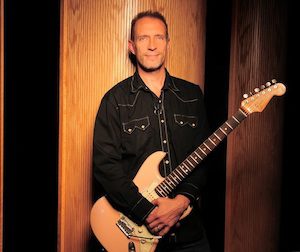 Belmont University’s Mike Curb College of Entertainment and Music Business will honor Gordon Kennedy with the sixth annual Robert E. Mulloy Award of Excellence on March 29. The award presentation, which will occur during the University’s 2014 Best of the Best Showcase at Belmont’s Curb Event Center, will feature special performances by Belmont students as well as Kennedy colleagues Peter Frampton and Ricky Skaggs. “Best of the Best” begins at 7 p.m. and is free and open to the public.
In the spring of 2008, the Curb College established the Award of Excellence in memory of program founder Bob Mulloy to annually recognize an individual who has achieved a level of excellence in the music business and entertainment industries with notable service to Belmont University and the Nashville community.
Kennedy, a Shreveport, La., native, was raised in Nashville. His parents are Jerry Kennedy and singer Linda Brannon. While attending Belmont, Gordon Kennedy played guitar for Reba on several cuts including “Today All Over Again” and her first No. 1 song, “Can’t Even Get The Blues.” Kennedy became nationally recognized when he won a Grammy for Song of the Year in 1997 for Eric Clapton’s “Change The World,” which Kennedy co-wrote with Wayne Kirkpatrick and Tommy Sims.
Kennedy has also spent time as a member of the bands WhiteHeart and Dogs of Peace, and has had songs recorded by Garth Brooks, Trisha Yearwood, Faith Hill, Tim McGraw, Carrie Underwood, George Strait and Martina McBride. He has also played for Peter Frampton, Jewel, Faith Hill, LeAnn Rimes, Little Big Town, and Amy Grant.
Past recipients of the Robert E. Mulloy Award of Excellence include Donna Hilley, the International Entertainment Buyers Association, Vince Gill, Mike Curb, Clair Audio and Bandit Lites.