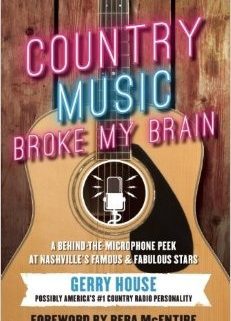 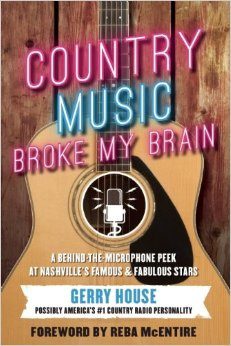 Gerry House’s new book Country Music Broke My Brain: A Behind-The-Microphone Peek At Nashville’s Famous & Fabulous Stars, will be released March 4, 2014. It will be published by Bella Books. As host of the nationally syndicated, top-rated morning show, Gerry House & The Foundation, House was part of Nashville radio station WSIX for more than 25 years. He has won numerous broadcasting awards, including a place in the National Association of Broadcasters Hall of Fame.
House has also written songs for George Strait (“The Big One”), Reba McEntire (“Little Rock”), LeAnn Rimes (“On the Side of Angels”) and Pam Tillis (“The River and the Highway”).
In Country Music Broke My Brain, Gerry shares his stories from the other side of the microphone. He reveals never-aired, previously unpublished conversations with Country artists including Johnny Cash, Brad Paisley and McEntire, who also penned the book’s forward.
House wrote his own daily radio material and also stand-up jokes and TB scripts for other shows for years, including the ACM Awards, the CMA Awards, the CMT Awards, and others.
To pre-order, visit amazon.com.