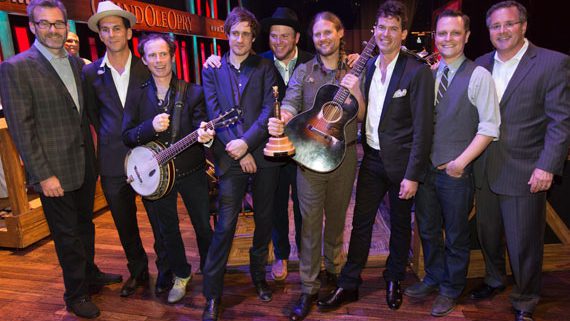 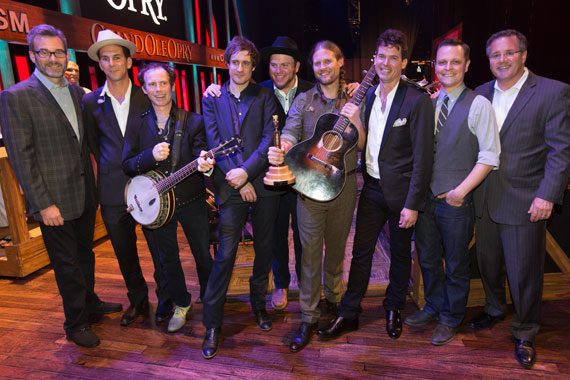 Tuesday evening (Sept. 17) Opry members Dierks Bentley and Marty Stuart inducted Old Crow Medicine Show into the Grand Ole Opry. Years ago, some of the band’s first performances in Nashville took place on the Opry’s sidewalks. In honor of those early days, the band performed  for fans waiting outside the Opry last night, playing songs like “Brave Boys” and “Hesitation Blues.”
On the venue’s stage, Opry VP and General Manager Pete Fisher joined Bentley and Stuart to present the band with its Opry member award. “Congratulations, Old Crow, on being a part of the coolest club there is,” said Bentley, while Stuart added, “You offer a whole new energy and love for country music in the 21st century.”
Old Crow Member Ketch Secor, who was recently feted for his first No. 1 song, spoke on behalf of the group, saying, “We’re standing out here on the most beloved broadcast anywhere on earth. I think we made it big on radio! … We the Old Crows are just so proud to be entrusted to carry on the traditions of the Grand Ole Opry’s good-natured riot.”
After performing “Wagon Wheel,” the band invited fellow members Bentley, Stuart, Connie Smith and Del McCoury to join them for “Will The Circle Be Unbroken” and “I Saw The Light.”
“Old Crow has over the years become a favorite of Opry audiences and everyone backstage, as well,” said Fisher. “It’s fun for so many of us that in many ways Old Crow looks and sounds a lot like some of the great early Opry bands like Roy Acuff and his Smoky Mountain Boys—bands which helped propel the Opry to national prominence. Tonight represents a great full circle, and as the great Jimmy Dickens says, ‘The circle can’t be broken.’” 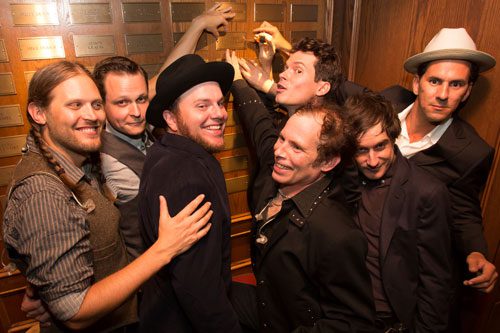 Following the induction, the band added a plaque bearing its name to the Opry Member Gallery backstage at the Opry House.
Old Crow Medicine Show will perform concerts on Dec. 30 and Dec. 31 at Nashville’s Ryman Auditorium. Tickets will go on sale Sept. 27 at 10 a.m.