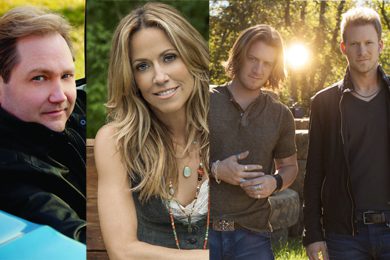 Sheryl Crow and duo Florida Georgia Line will hit the Big Apple on September 10 to announce the nominees for the 47th Annual CMA Awards on Good Morning America live.
The three will announce nominees in five categories during the ABC-TV broadcast’s 8:30 a.m. ET segment, followed by an appearance at the Best Buy Theater in Times Square to reveal the finalists in the seven remaining categories. All of the announcements will stream live via cmaawards.com.
Four-time CMA Award winner Steve Wariner will also be on hand in Nashville that morning to announce the finalists for the 2013 CMA Broadcast Awards for Personality and Radio Station of the Year in four categories (small, medium, large, and major markets), as well as the finalists for the CMA National Broadcast Personality of the Year at 7:30 a.m. CT.
“We are pleased to have these dynamic artists bring these important and highly anticipated announcements to the media capital of the world, and still be able to share the excitement live with our constituents back in Nashville,” said CMA President of the Board of Directors Ed Hardy.
Winners of the 47th Annual CMA Awards will be announced on air during the telecast on Nov. 6 on ABC-TV. The show will be hosted for the sixth concecutive year by Carrie Underwood and Brad Paisley.