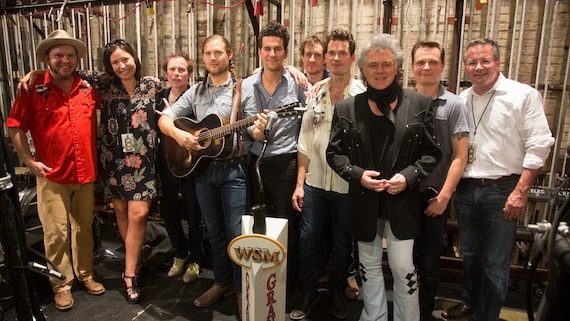 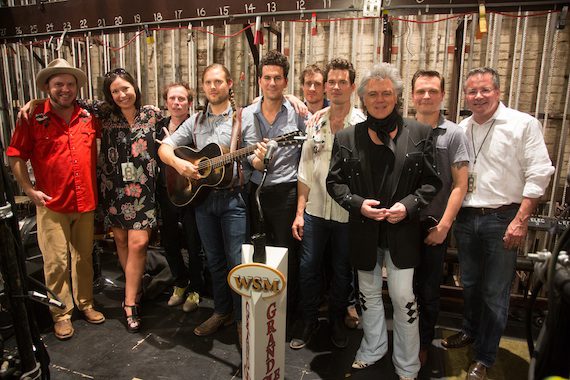 Old Crow Medicine Show was invited to become the latest members of the Grand Ole Opry during their show last Friday night (Aug. 16) in Ohio. The string band has long-standing ties with the Opry since some of its first performances took place on the sidewalks outside the Opry House in 2000 playing for fans on their way into and out of Opry shows. They’ve come a long way since then, making their first official performance on the Opry stage a year later in January 2001, and subsequently playing the hallowed hall dozens of times since. Their formal induction ceremony will take place Sept. 17.
The band received their surprise invitation to join the Opry from Marty Stuart during their show at the Ohio Theater in Cleveland. Clearly thrilled with the invitation, they gave a resounding yes and then launched into  “We Don’t Grow Tobacco” with Stuart before performing their signature tune/fan favorite, “Wagon Wheel.”
“Inviting Old Crow to become our next member is truly exciting for us,” said Pete Fisher, Opry vice president and general manager. “For one, Old Crow has grown before our eyes from entertaining Opry-goers for free in the Opry Plaza a dozen years ago to rank today among the most respected and popular acts in music. It’s also exciting that in many ways Old Crow looks and sounds a lot like some of the string bands of the 1920s  which helped first propel the Opry to national prominence. While recent Opry inductees and contemporary hit-makers such as Darius Rucker, Keith Urban, Carrie Underwood, and Dierks Bentley, will help shape the Opry in coming years, our future is also in excellent hands with this group, which happens to be quite reminiscent of our musical past. It’s an awesome full circle.”