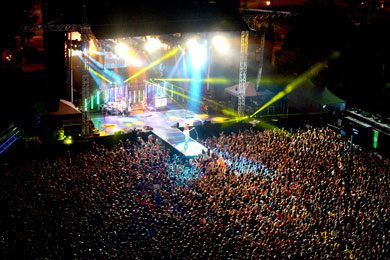 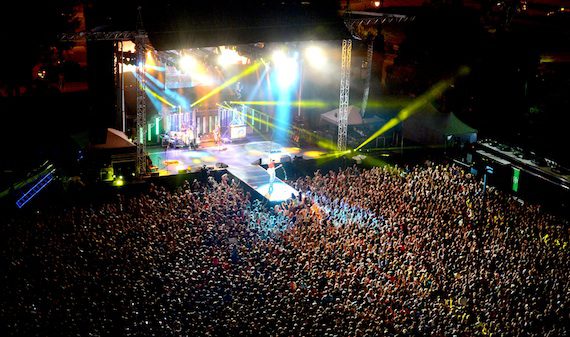 Ain’t no party like a parking lot party…
Wait, wrong song. Jake Owen may not have recorded Lee Brice’s “Parking Lot Party,” but he proved he’s a master at throwing one. Nashville country fans turned out en masse for a free block party last night (Aug. 19) in the parking lot of performing rights organization BMI. According to Owen’s publicist, 20,000-plus attendees gathered for the performance. Fans began gathering hours before the concert; lines eventually wrapped around the BMI building and stretched several blocks down Music Row’s 16th Avenue.
The party launched with a performance by The Cadillac Three, whose country-rock blend amped up the crowd in anticipation of headliner Owen. Before Owen’s performance, a more formal No. 1 celebration was held for Owen’s chart-topping single “Anywhere With You,” co-written by Ben Hayslip, Jimmy Yeary and David Lee Murphy. What better way to celebrate a No. 1 song than with several thousand diehard fans? ASCAP’S Michael Martin and BMI’s Clay Bradley were on hand to honor Owen and the songwriters, along with producers Rodney Clawson and Joey Moi, EMI Blackwood’s Tom Luteran, Sony Nashville’s Gary Overton, THiS Music’s Rusty Gaston, Old Desperado’s Doug Casmus and Avenue Bank’s Ron Cox, who made a donation in the name of the writers to Big Brothers, Big Sisters of Middle Tennessee. “I think this is the biggest No. 1 party in Country music,” said Bradley.
Afterward, Dee Jay Silver kept the energy up by spinning a mix of country, rap and Top 40 tunes. Owen came onstage accompanied by flashes of stage lights, sailing through several of his up-tempo songs and slow-burning ballads, including “Barefoot Blue Jean Night,” “Anywhere With You,” “The One That Got Away,” “Yee Haw” and “Startin’ With Me.” He repeatedly thanked the audience for coming out, telling the crowd how much it meant to him and his band.
“This Monday night is meant for gettin’ drunk,” sang Owen as he wrapped up a rendition of his single “Alone With You.” Beer bottles danced above the crowd as attendees held up their drinks in solidarity. From making use of a catwalk stage to lying on the stage in order to take photos with the fans, Owen did his best to make the raucous outdoor party seem like an intimate performance. He also treated the crowd to a new ballad, “What We Ain’t Got.” 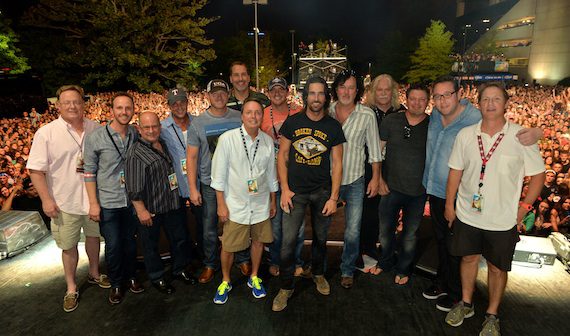 Of course, what’s a Nashville concert without additional artist performances? Just hours before the show, it was announced that Dierks Bentley and Florida Georgia Line would be crashing the party. FGL joined Owen for “Summer Jam,” a track written by FGL’s Brian Kelley and Tyler Hubbard, and recorded by Owen on his Endless Summer EP. Thomas Rhett performed his single “It Goes Like This,” an anthem that immediately got the fans’ hands in the air, with both girls and guys singing along in full voice. Bentley and Owen got the packed crowd going a little crazy with “5-1-5-0,” though the momentum was slightly stalled when the performers’ microphones went out. Ever the professionals, Bentley and Owen got the crowd to shout and signal 5-1-5-0 until the sound returned.
Sound problems persisted throughout the evening; however, the crowd hung on to the very last note, caught up in their own Southern summer barefoot, blue jean night.
[slide] 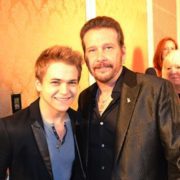