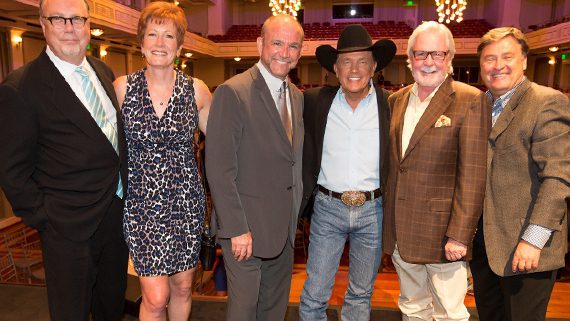 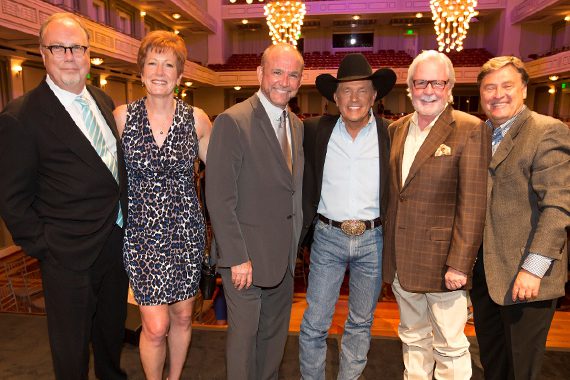 In an exclusive event at Nashville’s Schermerhorn Symphony Center yesterday evening (Aug. 28), it was announced that MCA recording artist George Strait would record five more albums for the label group.
Although the entertainer plans to retire from the road in 2014, the private gathering also touched on the Country singer’s recording success: 60 No. 1 singles throughout his 32-year career at the label home, which has garnered sales in excess of 68 million units. “I think I have been at MCA longer than most people in this room have…I still have a home,” remarked Strait after a presentation from UMG Chairman/CEO Mike Dungan. “George Strait simply defines Country music, yesterday, today, and tomorrow,” said Dungan.
For the party, guests were welcomed into the center’s lobby, which was decorated with road cases filled with Strait memorabilia including that from Pure Country, in addition to cowboy boots from his Country Music Hall of Fame induction.
After video presentations in the concert hall, the legend took the stage with his Ace in the Hole band to perform “Troubadour,” “Amarillo By Morning,” “The Chair,” and “I Believe” arranged by Tony Brown and performed by students from Nashville’s Eakin Elementary in recognition of the Newton Tragedy. The school is a beneficiary of the CMA’s Keep the Music Playing music education program.
Event attendees left with complementary copies of Strait’s first record, and his latest.
Announcements have not been made for the 2014 leg of Strait’s The Cowboy Rides Away farewell tour.