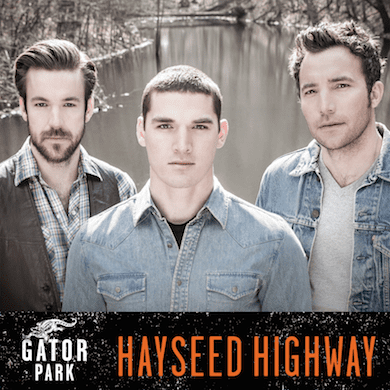 Three voices. Two brothers. One best friend. Gator Park, a vocal trio steeped in the classic country tradition of storytellers like Rodney Crowell and Alabama, is proof that there’s strength in numbers.
Formed during the hottest days of a Tennessee summer, the band began as a casual jam session between friends. Bryan Hobbs and Kerry Justin Degman started swapping songs in “the treehouse,” a small shed nestled into the woods behind Bryan’s home. Within weeks, they were joined by Bryan’s younger brother, Andy Hobbs. Drawing on a mutual appreciation for old-school country tunes anchored by strong, linear storylines, the guys began creating their own material. Since everyone contributed to the songwriting process, they decided to share the frontman role, too, with all three musicians singing on every song.
“When Andy and I were kids, we used to go down to Florida once a year,” says Bryan, who doubles as the band’s bass player. “The kids would run off from the parents and go looking for alligators. To us, that represents the wonder years: a time when we were all young, innocent and carefree. Everyone remembers those days, and that’s why we chose to name the band Gator Park.”
By the end of the summer, Gator Park had written an album’s worth of material. Looking for a producer who shared their vision, the guys flew to southern California, where they teamed up with Max Collins, frontman of the ’90s alt-rock band Eve 6. After recording the bulk of their album at Collins’ L.A. studio, the entire crew flew back to Nashville, where Gator Park wrapped up the recording process at Blackbird Studio, one of the most famous studios south of the Mason Dixon Line. The band’s team expanded, too, with Chuck Ainlay (Steve Earle, Miranda Lambert) and Ben Folwer (Hank Williams, Jr.) doing the final mixes.
The result? The Lake, a sharp, sweeping debut album that paints the picture of three grown men who haven’t forgotten where they came from. It’s an album rooted in memories, anchored by three-part harmonies and sweetened by a combination of fiddle, acoustic guitar, pedal steel and B3 organ. From road anthems like “Hayseed Highway” to rootsy power ballads like “Flowers,”  is the sound of a new trio that’s ready to make waves, one harmony-laden song at a time.
website: www.gatorparkmusic.com
Email address: [email protected]
instagram: instagram.com/gatorparkmusic
Twitter: twitter.com/gatorplarkmusic
soundcloud: https://soundcloud.com/gatorparkmusic