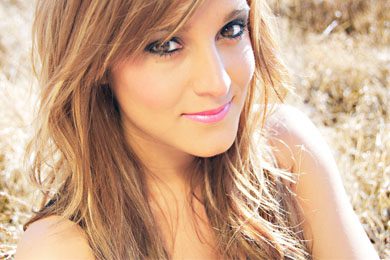 Veronica Ballestrini began writing songs and playing guitar at the innocent age of 12. She learned early on the value of our modern social media phenomenon. Over the last several years, in fact, her fan base has exploded exponentially, spreading to all corners of the globe. With one modest dream and an Internet connection, the enthusiastic yet mature-beyond-her-years singer from Waterford, Connecticut, has raised more than a few eyebrows with her self-made success story.
The staggering numbers on her social network sites are proof that Veronica has that special ability to connect with people. She has amassed more than 4 million views of her videos on YouTube, and her online fans and followers number well into the hundreds of thousands. Part of Veronica’s success comes from her undeniable Pop-Country crossover appeal. She points out that while she considers her music to be Country, that doesn’t mean that it can’t have its own spin on the genre.
Veronica’s 2009 debut album, What I’m All About, capably demonstrated her unique take on the modern Pop-Country sound. She released three singles and videos from the record (“Amazing,” “Out There Somewhere,” “Don’t Say”), propelling her into the consciousness of Country music fans around the globe and earning more than a quarter-million views of her videos on CMT.com alone. Ballestrini has been out on the road performing her music on a Girl Scout tour, Festival tours, and tours with Secondhand Serenade, Alex Goot, and Juliet Simms of “The Voice”.
Veronica spent the last three years writing songs for her new project. Her sophomore album “Flip Side”is set to release June 17th, 2014. The first single off of the album is “Cookies and Cream”. Veronica’s most focused and polished effort to date.  “Cookies and Cream” reflects Veronica’s growth as a more mature singer and a more seasoned songwriter. It’s a process that she acknowledges is a natural evolution in her artistry. “I’ve been hurt, I’ve been broken, I’ve made mistakes, but I’ve also had the best days ever, and I’ve written songs about all these times” Veronica says. “I am excited to share what I’ve been up to. I’m writing from my heart about issues and things I’ve experienced, and hopefully people can identify with that.”