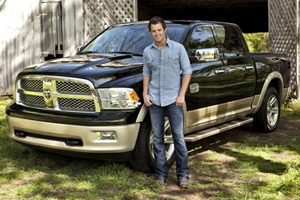 The Ram Truck brand will wrap up its Road to the Ram Jam country music series with the auction of Easton Corbin’s 2012 Ram 1500 Laramie Longhorn. Starting today, March 18 at 7 p.m. EST, fans can bid for Corbin’s truck with all the proceeds from the auction benefiting the Freedom Alliance Scholarship Fund, which honors Americans in our Armed Forces who have sacrificed life or limb defending our country by awarding college scholarships to their children.
“All of the proceeds from the auction of Easton’s Ram truck, are going to help the sons and daughters of American heroes achieve their dream of a college education,” added Tom Kilgannon, president of Freedom Alliance. “Every scholarship we give out is a reminder to the student that their parent’s sacrifice will never be forgotten by a grateful nation.”
As part of the Road to the Ram Jam series all five participating artists – Kellie Pickler, Brantley Gilbert, Billy Currington, Zac Brown Band, and Corbin – received a one year lease on a 2012 Ram 1500 Laramie Longhorn truck. Zac Brown’s truck was auctioned off last week and raised $39,300 for Camp Southern Ground. Pickler’s truck was auctioned off at the end of January raising $36,200 for the USO Warrior and Family Care program, Gilbert’s truck was auctioned off in early February raising $34,552 for the IAVA and Currington’s truck was auction off at the end of February raising $34,578 for Team Rubicon. Corbin’s truck will be the last truck to be auctioned off as part of the Road to the Ram Jam all-star country music series.
“The whole purpose of the auction is to help other people and knowing that the proceeds from the truck will do this – is a great thought,” said Corbin. “I definitely encourage my fans to bid on the auction. They get a great truck out of the deal and also provide college scholarships to some well-deserving young people.”
To get more information on the charity auction hosted on eBay Giving Works and to bid on Easton Corbin’s truck please visit www.ebay.com/roadtoramjam.