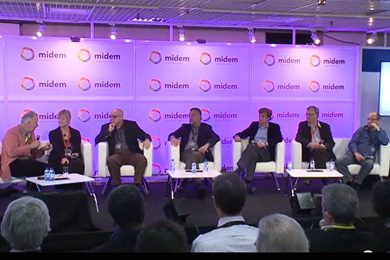 Last year at MIDEM, the Global Repertoire Database (GRD) initiative was announced; this year that initiative is underway. Simply put, the GRD is a central source for copyright metadata related to music. This metadata will include the creators of these works and their ownership, control and/or administration. It is intended to solve a major problem between the music industry—particularly publishers—and digital companies because it will create one source for companies to go to in order to find out who controls a copyright and, therefore, who to seek in order to receive permission to use that work.
The GRD panel at MIDEM was hosted by Stephen Navin, Chief Executive of the Music Publishers Association (UK). Members of the panel were Jackie Alway, Director of Legal & Business Affairs International, Universal Music Publishing (UK); Michael Battiston, Vice President, International Business Development, ASCAP (US);  Alfons Karabuda, Executive Chairman, ECSA (Belgium); Thimo Prziklang, Director of Corporate Development, GEMA (Germany); Pekka Sipila, Executive Director, Finnish Music Publishers Association (Finland) and Sami Valkonen, Head of International Music Licensing, Google Play, Google (US).
Navin began the session by announcing, “this is one of the most dynamic projects in our industry. It was discussed last year and then undertaken. Over 100 people from 30 different countries are hard at work on this and you can feel the pride in this project. This is a structure that is going to deliver our business to the digital age. It involves taking a multiplicity of data from around the world and creating a Palace of Data, the Jerusalem of Data, which will benefit all of us greatly.”
Prziklang of GEMA noted, “the world repertoire of music will be there in its final state. It will be one place to go to find out about mechanicals and sync rights.”
Battiston of ASCAP added, “it’s much more than just a database. It is a single point of contact for publishers who will only pay a single acknowledgement fee once registration is in. There will be a single operating area to reconcile the data. A single place helps resolve conflicts because the GRD will direct queries to the suppliers of information—such as ASCAP or BMI.  Once in GRD, there will be a major service to get that data to collection societies and publishers. It will give easy access to music users.” Finish Music Publishers’ Sipila stated, “Creators, collection societies, licensees, publishers, record companies, and advertising agencies will all have different limits to access, dependent on how the information is used.
The Global Repertoire Database will be financed by 13 collection agencies through a “loan” process.
“The real value of the GRD is shared copyright operations,” said Battiston. “Everything will be done in a single place with the data fed to all societies. The result will be a large savings because it will clear and reconcile a set of data everyone can agree on. It will make all of our lives easier. When a publisher or collection society receives an invoice, they can see if it lines up with conflicting data. Someone who wants to use this data will know where to go to find the rights.”

Google’s Valkonen noted the progress from last year at MIDEM, stating, “Last year this was a Power Point; this year it is real. However, the next stage will require a lot of extremely complex work.”

Karabuda of ECSA in Belgium noted that there will be unknown advantages in the future because “we are creating something for inventions that are not yet invented, for compositions not yet composed.”
“Digital space is global,” stated Jackie Alway with Universal Music Publishing (UK). “This is the first time access to a database is global. This is the opportunity to do it once and do it right. We will provide one place to register instead of having to register in multiple societies.”
“There is no data base today for people to refer to for digital services,” added Prziklang.
Walkonen stated, “in our current practice of licensing, we don’t have any idea of conflicts which lead to a great deal of time and attention wasted to sort those out. With GRD we will be able to make the money flow a lot faster to our partners. The ultimate benefactors will be the composers, authors and publishers because we can turn money around a lot faster.”
“The GRD isn’t gong to solve copyright disputes itself,” said Alway. “These will be referred back to the rights owners.”
The Global Repertoire Database is expected to be operational in 2014, although panelists repeatedly stated that data injection is a complex process and their aim is to do it right regardless of how long it takes—although time is of the essence.