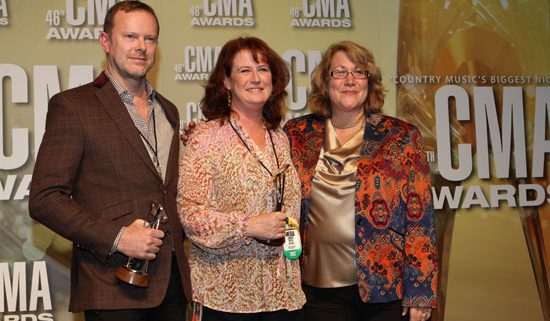 The team of Jennifer Meyer (Senior Producer) and Ray Sells (Supervising Producer) of CMT Insider was presented with the 2012 CMA Media Achievement Award backstage in the media center during The 46th Annual CMA Awards. CMT Insider is one of the network’s most highly-rated and its staff covers all major Country Music events.

Meyer joined MTV Networks in 2001 in the CMT News Department, and her resume includes time with CMA, WKRN-TV and more. Sells came on board in 2004, having prior experience at Tangible Vision and Reid Land Productions among others. Meyers and Sells also previously worked closely together during their tenure with Jim Owens & Associates.

The CMA Media Achievement Award was established to recognize outstanding achievements in media related to Country Music. Past winners include The Boot’s Beville Darden (2010), Storme Warren (2007), and Robert K. Oermann (1988). 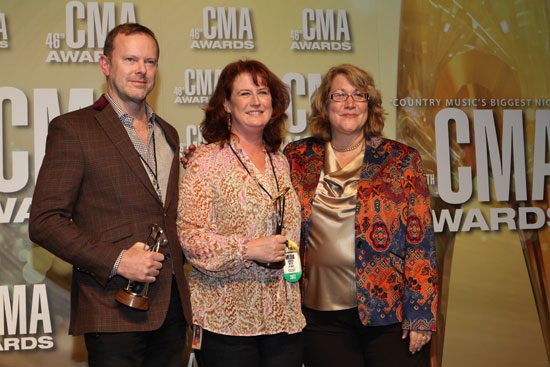 CMA Award winning foursome Little Big Town surprised Bob Harris of BBC Radio 2 with the presentation of the 2012 Wesley Rose International Media Achievement Award during the red carpet interviews leading up to the CMA Awards. The honor recognizes outstanding achievements in media which contribute to the development of Country Music outside the United States.

“I feel truly honored to receive the Wesley Rose International Achievement Award,” said Harris. “For my work to be acknowledged by the Nashville Music Community and to have the award presented by Little Big Town on the Red Carpet means the world to me.”

A longtime supporter of Country Music, Harris began his career with the BBC over four decades ago and was recently inducted into the British Country Music Hall of Fame. He is also recipient of the Mojo Medal, and the Americana Music Association’s Trailblazer Award, and was made Order of the British Empire in 2011. 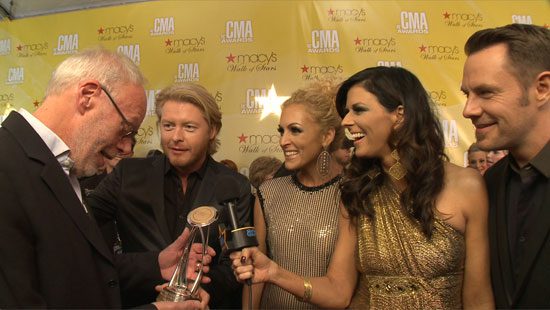 Lipscomb University junior Caitlin Selle has been named the recipient of the 2012 CMA Close Up Award of Merit, honoring the student journalist or photographer who demonstrated the most creativity, dedication, and promise in covering the CMA Music Festival. The 20-year-old student from Tega Cay, SC, was presented with the honor last night (11/1) during the backstage press conference for the 46th Annual CMA Awards.

Candidates for the Close Up Award of merit are chosen based on recommendations from departments heads at several universities and colleges, and cover the CMA Music Festival under direction of CMA Close Up Editor Bob Doerschuk. 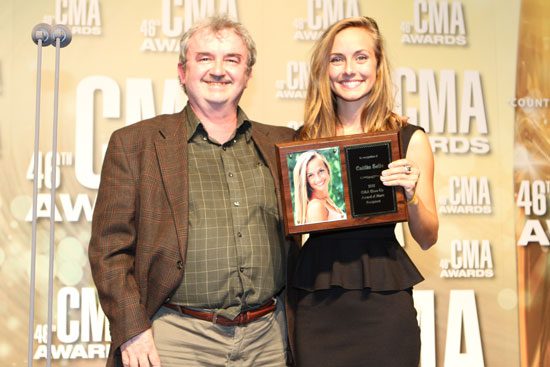