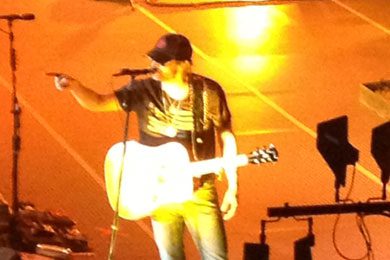 I am writing this days before the CMA Awards, so if Eric Church cleaned up yesterday I am not just jumping on the bandwagon. Though after seeing the Eric Church show last Friday night at the Patriot Center in Washington, DC, I am ready to drive the bandwagon.

There are a few things about Eric’s show that really stood out. The most obvious is that it took place on a college campus not located in Alabama or West Virginia. The Patriot Center is the home arena of the George Mason University Patriots.

This is a university that offers a minor in Ancient Mediterranean Art and Archaeology. Not Football. Like most colleges though I noticed during the show that it, like WVU, majors in beer drinking. Right in Eric’s sweet spot.

The entire show seemed built for this crowd. Opener Kip Moore has always had a good college following even before he hit it big with country radio. He was well received and, while the arena was about 30% full when he took the stage, those folks were excited to see him perform. I was impressed to see him stay until the end of the entire program, after Eric, and sign autographs for everyone willing to line up. This was about 11:15 and by the length of the line I imagine Kip was there until midnight.

Justin Moore was the middle act. I have seen him a couple of times now and think he has come a long way as he has piled up radio hits. He seems to have more confidence on stage and the crowd was wild for his music.

The thing about both Kip and Justin—this is country music with a capital C.

I am not a concert reviewer. I judge the show by how much fun the crowd is having. These kids were having fun. In fact, I think that they passed fun about halfway through the show.

Back to Eric. I had a chance to speak with him for a minute before the show and you can tell he is enjoying his first headlining tour. It is tiring, without question, to go out there and do 90 minutes of a high intensity show every night but his energy on stage lifts the entire crowd.

The Blood, Sweat and Beers tour does about 15 west coast dates before coming back to the east coast at the end of the month. If the show is anywhere near you before it winds down in February run, don’t walk, to see it.

The thing about the show is how interactive it is with the fans, and how energetic the crowd is. I wouldn’t be surprised to learn that everyone in the audience has downloaded “Chief” to their iPhone.

Yeah, they are supposed to know “Homeboy,” “Drink In My Hand” and “Springsteen” (which is a very cool part of the show), but they also knew every word to “I’m Getting Stoned” and “Jack Daniels.”

And when about 500 people take off a boot during the song “These Boots” and few even throw them on the stage, apparently not concerned about limping home, you know they have been Eric Church fans for a few years.

In motion pictures, actors are referred to as dangerous. When Jack Nicholson is on screen, you stay on Jack. He is the middle of everything. That’s how I felt about Eric during his hour and a half performance—he is dangerous. He so commands the stage, which is busy with fire and smoke, that he seems bigger than life.

What really excites me about Kip Moore, Justin Moore and Eric Church playing this show to an overwhelmingly college crowd is that they had to be introduced to these acts on country radio. Yeah today college radio plays all three of these guys but it had to start on country radio and that speaks to a healthy future for everyone.