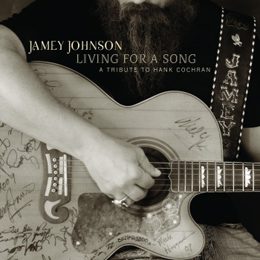 Country radio station 650 AM WSM-Nashville is debuting Living For a Song: A Tribute to Hank Cochran, the new album by Jamey Johnson and friends, with special programming all day today (10/15).

Throughout the day station will feature a song from the album every hour beginning at 7 am. Listeners will also have opportunities to win limited edition prints and the CD, which will be released tomorrow (10/16). The daily events culminate with a two-hour live special hosted by Eddie Stubbs and feature Johnson with producers Buddy Cannon, Dale Dodson and Bobby Bare.

The programming will be made available at www.wsmonline.com or via the station’s free mobile app.

The collection (full track listing below) was available initially as vinyl on September 25.

Cochran’s life was commemorated on film, which debuted at the Nashville Film Festival earlier this year. Log in to read MusicRow’s Bobby Karl review of the event here.