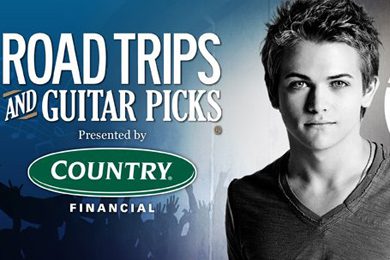 Road Trips and Guitar Picks, created by Country Financial, has partnered with Hunter Hayes to offer fans a free download of the previously unreleased title, “Light Me Up” on the company’s Facebook page. Until now, the track could only be heard live in concert.

“I am really excited to finally release ‘Light Me Up’,” Hunter says. “This is such a great way to say thanks to all the fans for their support!”

Additionally, CF has partnered with Hayes for 15 dates as he tours with Carrie Underwood’s Blown Away Tour. Fans can enter a sweepstakes to win a VIP experience, concert tickets and backstage passes to meet Hayes and receive a special performance. Additional offerings include support for an upcoming Livestream tour where Hayes will give free exclusive concerts, as well as a chance for fans to participate in the upcoming “Light Me Up” video.

Over the past three years, Road Trips and Guitar Picks has partnered with artists as Train, Trace Adkins, Jason Aldean and Little Big Town.